‘There is a land where summer skies are gleaming with a thousand dyes’: a 1977 voluntary vote plebiscite on a musical matter

Plebiscites are in the news. There have been plebiscites before in Australian history. There were two on conscription in 1916-17 and they were held against perhaps the greatest societal divisions in our history. (See our series, ‘Divided sunburnt country‘.)

Forty years ago, too, Australians – or most of them – voted in a voluntary plebiscite to choose a national song. There were four contenders, God Save the Queen, Advance Australia Fair, Song of Australia, and Waltzing Matilda. Advance Australia Fair won comfortably on preferences and Song of Australia, musically superior to at least two of its rivals, was strongly supported only in South Australia, where it had always been popular. Waltzing Matilda was the top pick only in the ACT.

The choice was between tunes, not words. God Save the Queen was still the National Anthem, having been temporarily displaced under the Whitlam Government, been reinstated by Fraser, and later to be dumped by Hawke. 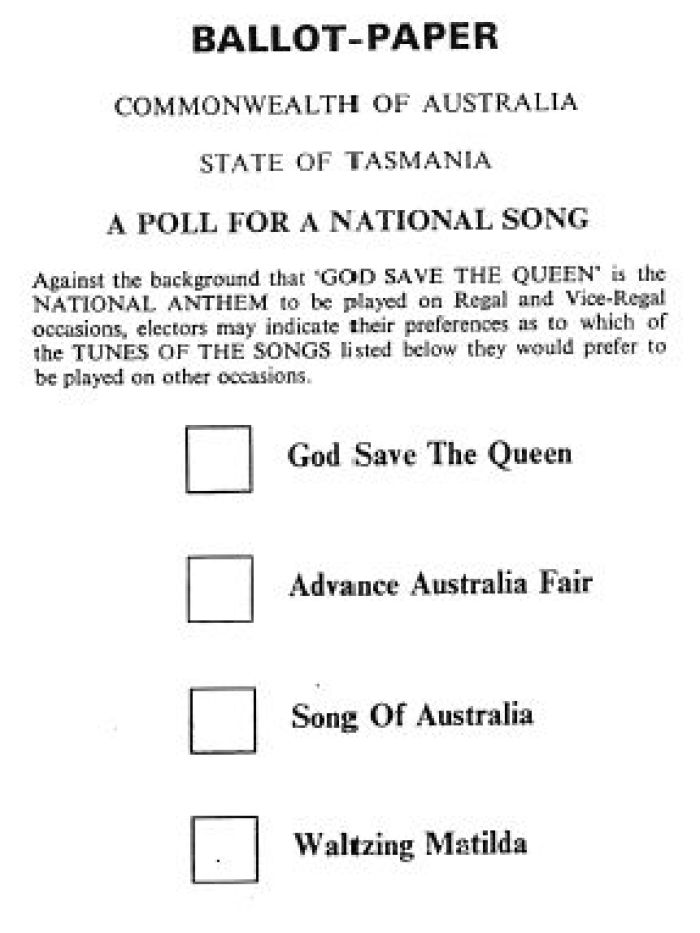 To show what we missed out on, here is the tune of Song of Australia, played by the Australian Navy band. (You can almost hear in the song the morning sounds of magpies in the Flinders Ranges.) The words, composed in 1859 by a Mrs CB Carleton of Adelaide, are here in full in a contemporary newspaper. The music was composed by Carl Linger, a German immigrant. Here is the first verse:

There is a land where summer skies

Are gleaming with a thousand dyes,

Blending in witching harmonies [… in harmonies];

And grassy knoll and forest height,

Are flushing in the rosy light,

And all above is azure bright — Australia! [repeated twice with unction and emphasis on each syllable, as sung here by the incomparable Peter Dawson]