Update 14 July 2021: Citizens dissatisfied by the NCA brush-off described below may wish to express their concerns to the responsible Minister and/or the relevant parliamentary committee

This post is addressed primarily to the 22 people who requested from the National Capital Authority a Statement of Reasons under the Administrative Decisions (Judicial Review) Act, setting out why the Authority had rejected points made in submissions to it on the War Memorial project. As we understand it, those 22 people have either received no response at all from the Authority, or have received an unsatisfactory response along the lines of the post below, which essentially refers them to a ‘one size fits all’ response posted on the NCA website.

Ms Marino is the Minister responsible for the NCA. The Joint Standing Committee receives a briefing from the NCA twice a year and has been receptive in the past to public comments bearing upon the NCA’s performance.

Letters to the Minister and/or the Committee should request that they encourage the NCA to respond properly to the request for a Statement of Reasons and to do so by setting out the relevant findings of fact, the evidence and the reasons for rejecting each of the objections raised in the requester’s original submission to the NCA. Further points may be taken from the post below.

This Statement of Reasons is an odd document. It is dated 5 July, it is 28 pages long, and is over the signature of the National Capital Authority’s Chief Planner, the decision-maker. It has been placed on the NCA’s website – ‘Owing to public interest in the Australian War Memorial redevelopment’ – and it is unique.

In other words, no matter how many people put in a request for a Statement of Reasons under the Administrative Decisions (Judicial Review) Act, this is the only Statement they are going to get. One size fits all, even though the Statement refers (page 1) to ‘requests’ (plural) for Statements and we know from the Authority by an email received today (thanks, NCA) that it had received 22 such requests.

By the way, people receiving the Statement were told they were lucky to get it:

[T]he NCA does not accept that you are entitled to a statement of reasons or that you would have standing as an “aggrieved person” to seek review of the NCA’s works approval decision under the Administrative Decisions (Judicial Review) Act 1977 (Cth) (ADJR Act). It is recommended that you seek independent legal advice regarding this matter.

So there. Perhaps we should say,’Thanks, NCA’, again.

We should not be surprised by this unhelpful document, however; it fits the pattern of the NCA’s approach to the War Memorial megabuild. Heritage Guardians did an analysis of the Authority’s consultation report on the War Memorial’s so-called ‘early works’ application. Among other things, our analysis criticised the Authority’s consultation report for its slipshod treatment of the 601 public submissions received. These often got no more than cursory (and misleading) summaries and the Authority’s comments on them seemed to have been selected by a ‘mix and match’ and ‘cut and paste’ method. We were critical also of what looked like a rush to judgement, with the Authority’s meeting being brought forward by a week and public submissions still being posted on its website after the approval decision was announced.

There is no point in going into a similar level of detail about the Chief Planner’s statement, although a few remarks are in order: 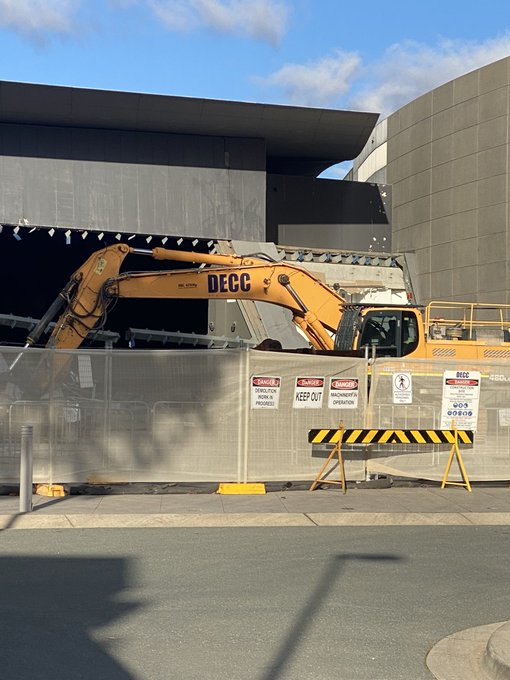 (Fiona Scott, taken 4 July, before the Statement of Reasons was published)

In other words, these people wanted the Authority to go to the trouble of saying why particular points made in their submissions did not cut it with the decision-maker. It’s not as if all 601 submitters requested reasons; there were only 22 of them who did so. Not a big ask, you would have thought, to get 22 separate Statements of Reasons. (The Statement of Reasons, incidentally, mentions that there were 601 submissions but omits the fact that 590 of them were against the project.)

The Heritage Guardians request (dated 28 June, just nine days before the date of the Statement of Reasons) certainly referred to particular points in our submission, and we know other requests did, too. Yet, the Statement of Reasons over the Chief Planner’s signature makes no attempt to grapple with individual requests. It recalls instead that remark often made on the TV cooking shows, ‘Here is something we prepared earlier’.

The Statement of Reasons continues the pattern of hasty and ill-considered decision-making set by the Authority’s treatment of the Memorial’s early works. ‘Cut and paste’, ‘mix and match’, ‘one size fits all’, lots of spin from both the Memorial and the Authority, and too much haste. It all adds up to an unedifying case study in public administration.

As the trees come down and the machinery rips into Anzac Hall, one can only imagine the political pressures on the Authority to ‘wrap this thing up, sharpish’. One can even sympathise with the Authority – a little. For all that, the people of Canberra – and Australia – deserved better than this.

One comment on “Stephens, David: National Capital Authority brush-off continues with ‘one size fits all’ Statement of Reasons for Memorial decision”