Should FLOTUS have stepped up? Or did POTUS Trump just need a decision-making dog? From the Honest History vault

There are lots of serious matters still to be resolved (or not) in Washington, but the current crisis made us look again at what past leaders have had to do to make up for their manifest inadequacies. Perhaps Trump’s advisers might have pushed him towards these precedents.

Among other examples, the second Mrs Wilson, wife of the US president of that name, pretty much ran the government for a while after her husband’s stroke. In Canada, Prime Minister Mackenzie King work-shopped important decisions with his pet dogs, all called Pat. And the Roman Emperor Caligula is said to have made his horse a consul.

There is more in our 2017 post, extracted from the Honest History vault: ‘The second First Lady, the pretend colonel, and the dogs of Ottawa: some alternative decision-making scenarios for heads of state‘. 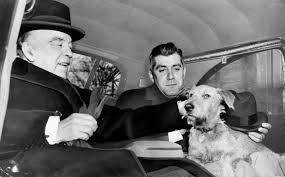 Mackenzie King, a Pat, and a human aide (Toronto Star)