Peter Norman (born 1942) was a remarkable Australian athlete. Through his achievement at the Mexico Olympic Games and his response to that achievement he became an Olympic legend.

At the 1968 Olympics Norman exceeded all expectations by winning a silver medal in the final of the 200 metres sprint. This was after he broke the Olympic record in winning his first round heat. His performance was remarkable: no other Australian male sprinter had won a silver (or gold) medal at the Olympics; nearly 50 years later his time in the final (20.06 seconds) is still an Australian record.

At the medal ceremony in Mexico City, Norman supported the two Americans, Tommy Smith (gold medal) and John Carlos (bronze), who made a symbolic protest in support of human rights and racial equality in the United States. Uproar followed: Smith and Carlos were vilified and were expelled from the American team; in Australia, Norman never received full recognition for his inspirational role in supporting the Olympic protest.

Norman died in 2006 at the age of 64. Following his death, recognition of his action at the Mexico City Olympics came in two significant ways. First, his nephew, the film maker Matt Norman, made a documentary feature film, Salute, as a tribute to his uncle. A summary of the film.

Then, in October 2012 the House of Representatives of the Australian Parliament passed a motion without dissent recognising Peter Norman’s powerful role in furthering racial equality and apologising for the failure to fully recognise his inspirational role. The motion was sponsored by Dr Andrew Leigh MP, member for Fraser. 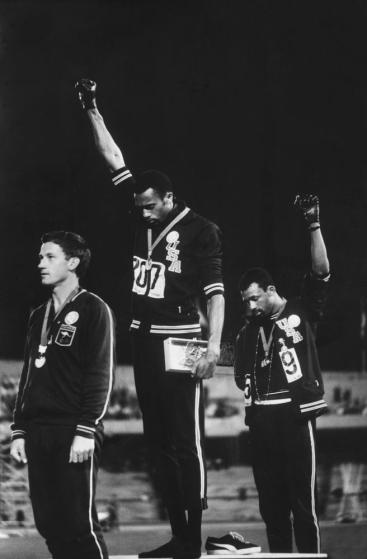