There is an anti-war event in London this weekend, organised by the No Glory in War and Stop the War coalition. The event commemorates the Battle of the Somme. A feature will be the song ‘Dandelions’ by Steve Donoghue, the lyrics of which include these words:

Now if you take an old dandelion
And just blow it quite gently he’d say
You can see all the dreams of those soldiers
In the seeds as they just float away
But then the wind takes hold of those seeds
And they rise and quickly they soar
Like the spirit of all those old soldiers
Who believed that their war would end war.

The song and the accompanying video puts the wearing of poppies in perspective. There is also a rather disturbing brusqueness about the brass – and the pretend brass, royal Princes – laying wreathes at the Whitehall Cenotaph.

More substantial than the dandelions (or the poppies) are the relics of war, including the Great War, that the Australian War Memorial accepts as donations. The Memorial is taking steps to rationalise its policy about accepting donations. By no means do all the donations offered get accepted: about half of 40 000 donations annually do not meet the selection criteria. The Memorial looks particularly for items that tell a story about the personal experience of individuals; diaries with apparent tear stains on them have particular significance.

The article about donations policy also noted that the Memorial is planning exhibitions on Indigenous service, Special Forces and, in 2018, the aftermath of the Great War. The last is particularly welcome, although Honest History has previously suggested that the aftermath of wars should have a permanent gallery to itself – even if this was at the expense of making more space available for relics of battles and war service. 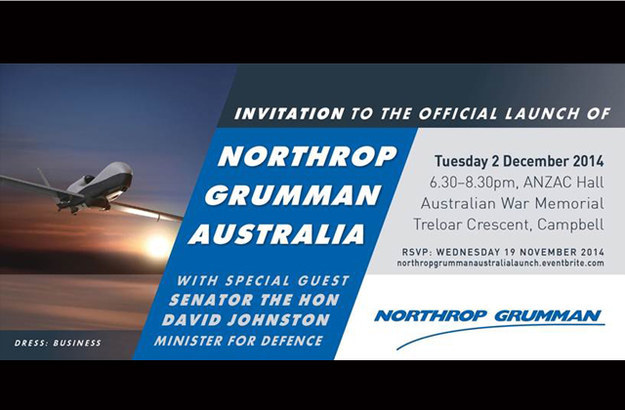 Honest History has commented at length on the Memorial’s relics; see our reviews of the refurbished World War I galleries at the Memorial and the book Anzac Treasures. Meanwhile, we look forward to hearing that the Memorial is reviewing not only its donations policy but also its corporate sponsorship policy; its major sponsors list for 2014-15 (pp. 149-50) includes a number of arms manufacturers (Australian Submarine Corporation, BAE Systems, Boeing, General Dynamics, Lockheed Martin, Raytheon, Tenix, and Thales). Also, Northrop Grumman famously held a Christmas knees-up in the Memorial’s Anzac Hall, with the defence minister of the day as the special guest. (Illustration from the story in Buzzfeed; see also our note, under heading ‘Parties’.)

Totting those up, that’s most of the biggest arms manufacturers in the world kicking in to the War Memorial’s coffers. It is clear that donations to war memorials help arms manufacturers to tick a box on their ‘community citizenship’ record but it is not clear why the Memorial chases or accepts money from such sources. (Perhaps it should remind us.) Many people would find a savage irony – or unacceptable obscenity – in the idea that companies which profit from war also pay to commemorate the victims of war.