Thoughts from the Hon. Alan Griffin, former Minister for Veterans’ Affairs in the Rudd government. Griffin questions whether this project is the best way to tell the stories of recent service, notes the view of some current MPs that at least part of the money earmarked should go to direct services for veterans, describes as ‘ludicrous’ the government argument that this spend is not at the expense of spending on direct services – unlike the Defence Minister (paragraph 6) he understands the simple economic concept of opportunity cost (whatever is spent somewhere cannot be spent somewhere else) – and reiterates the concerns of critics, including the government’s own Australian Heritage Commission.

“I do think when you have serious concerns raised about the heritage issues with respect to somewhere as iconic as the War Memorial, you’ve got to take those into very serious consideration before you move down the track,” Mr Griffin said.

The article quotes Memorial Director Anderson’s questionable statements on the degree of public support and the number of changes the Memorial has made in response to public input.

It is breathtaking that the Memorial still comes up with these statements on public support, when its own figures say different. For more on this see Heritage Guardians analysis. For example, McIlroy quotes Director Anderson at Estimates:

Yet, the Memorial’s own analysis of the EPBC material gives the following results: (tallying the table at p. 186 of Attachment C Response to Public Submissions) of the 167 submissions, 64 (38 per cent) were ‘generally supportive’ of the project, 97 (58 per cent) ‘generally not supportive’, and the remaining six submissions (4 per cent) ‘mixed or neutral’.

Heritage Guardians discussed these statistics with Memorial officers, who seem to have a better grip on them than the Director does. There is a polite email trail where, among other things, we agreed with the Memorial on the classification as supportive/not supportive of a sample of 97 out of the 167. (Honest History will publish without amendment any comment the Memorial now wishes to make on this matter.)

There is more on this in the Heritage Guardians analysis here, under the heading ‘Some statistics: no sign of the Memorial’s boasted 80 per cent support’. The material includes links to commentary on an earlier (methodologically dubious) survey done by the Memorial: see paras 34-53 of the Heritage Guardians submission No. 143 and project director Hitches to Senate Estimates, 4 March 2020, page 148 of the Hansard.)

McIlroy also quotes David Stephens from Heritage Guardians, who repeats a point made in the Guardians’ previous analysis.’The memorial claims that the heritage facade will be unchanged. Yet, the memorial’s own illustrations give the lie to this assertion.’ Figure 7.3 below from the Memorial’s Final Preliminary Documentation shows the extent of change between the current southern facade and how it will look should the project proceed. 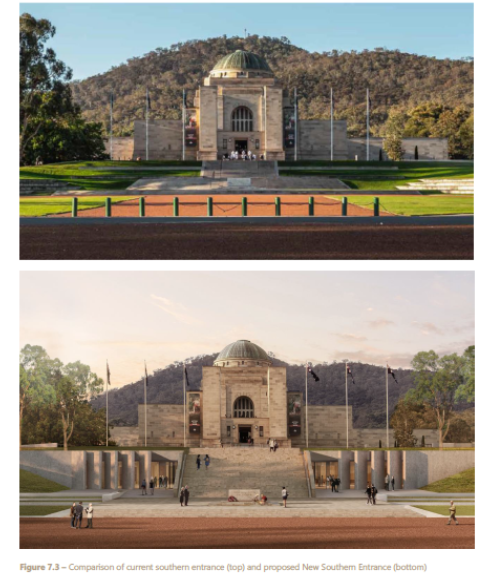