When Milton wrote the famous words, ‘They also serve who only stand and wait’, he was reflecting on his blindness. But the line has been used since in all sorts of ways, ranging from a lame joke about hospitality workers to a rueful recognition of the stress that women feel during wartime.

Women in the Great War did much more than stand and wait, however. Beatrice Eva Edmonds Fripp Jauncey and her sisters were Cheer-Oh girls. Doctors Vera Scantlebury and Mary de Garis worked to repair the damaged bodies of soldiers. Edith Cavell was executed for defying the Germans – and, incidentally, provided suitably patriotic given names for an aunt of mine born in 1916. A great-aunt on the other side of the family, nursing in France, was badly gassed but lived on, smoking (tobacco) heavily, into her nineties.

Women were at the forefront of the work of the Australian Red Cross, too, and Melanie Oppenheimer at Flinders University is about to publish a book to mark the Red Cross’s centenary. The role of nurses has been recognised in the Australian War Memorial’s Anzac Voices exhibition, the work of female service personnel – and the war’s impact on the wives of male personnel – has featured in the Memorial’s Afghanistan exhibition, and the sometimes traumatic effects of military service on women have been highlighted.

Women during the Great War also wrote poetry. The female poets of World War I, just like the male ones, ranged across the spectrum from patriotic to trenchantly anti-war and, like some of the men, they changed their tune across the four years of conflict. Jessie Pope was so keen to promote the war effort that Wilfred Owen almost directed his famous anti-war poem Dulce et decorum est at her but then thought better of it. (The poem was eventually published without any dedication.) An indication of Jessie’s jolly jingoism comes from the opening verse of her poem The Call, published in 1915.

Who’s for the trench— Are you, my laddie?

Who’s fretting to begin, Who’s going out to win?

And who wants to save his skin— Do you, my laddie?

Jessie was described many years later as ‘the Daily Mail‘s favourite first world war poet‘ though she also had a reputation during the war and after as a humorous writer. Her photo gives the impression of someone on the brink of making a wisecrack.

Elinor Jenkins is much less well-known than Jessie but, like Wilfred Owen, she fancied Latin titles. Her Dulce et decorum? (1915) included these verses, which seem to be ambivalent in their attitude to the war and its effects.

For we, that loved him, covered up his face,

And laid him in the sodden earth away,

And left him lying in that lonely place

To rot and moulder with the mouldering clay. …

Oh Lord of Hosts, no hallowed prayer we bring,

Here for Thy Grace is no importuning,

No room for those that will not strive nor cry

When loving kindness with our dead lay slain:

Give us our fathers’ heathen hearts again,

Valour to dare, and fortitude to die.

Winifred M. Letts, who nursed British wounded from the Dardanelles campaign, is less ambivalent in these verses from her Screens (in a hospital):

They put the screens around his bed; a crumpled heap I saw him lie,

White counterpane and rough dark head, those screens — they showed that he would die.

They put the screens about his bed;

And so we played at cards instead

And left him dying there alone.

Eleanor Farjeon, a distinguished writer for both children and adults, wrote Easter Monday (In Memoriam E.T.) in April 1917. She remembers the last letter received from France in which the writer thanked her for a gift of an Easter egg and apples. Then E.T. (Edward Thomas, a close friend) spoke

Of the coming battle and said, “This is the eve.

“Good-bye. And may I have a letter soon”.

That Easter Monday was a day for praise,

It was such a lovely morning. In our garden

We sowed our earliest seeds, and in the orchard

The apple-bud was ripe. It was the eve,

There are three letters that you will not get.

Finally, a woman war poet who later achieved great fame as an author, Vera Brittain, wrote these verses in 1916 in Perhaps (To R.A.L). She was 23 years old.

The prose that women write in war is no less affecting. Peter Stanley’s book Lost Boys of Anzac includes extracts from many letters from the mothers, wives and sisters of servicemen killed (though usually first reported as ‘missing’) on the first Anzac Day in 1915. One such letter shows something of the anguish felt by those who serve by waiting. Mrs Violet Scott, estranged from her husband, nearly blind, living in a hotel in South Africa, wrote to Base Records, Melbourne, some time in 1916 (probably; the first page of the letter is missing from the file) seeking news of her son, Archie.

I received a letter from Lt Butler, informing me that my son was wounded and missing in the Gaba Pete [Gaba Tepe] landing, that no trace of him was found among the dead nor in any of the military hospitals, nor had he been reported as a prisoner of war… I am told he was seen alive after the battle of Gaba Pete. You will be doing a great kindness to a mother who is not only afflicted with the loss of a son, but is also practically blind who otherwise would be at the front nursing. I was nursing during the Boer War. My son and I are both native born Australians. I am the daughter of a Crimean hussar who rode in the charge of the Light Brigade, James Archdeacon.

Archie had in fact been dead since the day of the landing at Gallipoli, 25 April 1915. 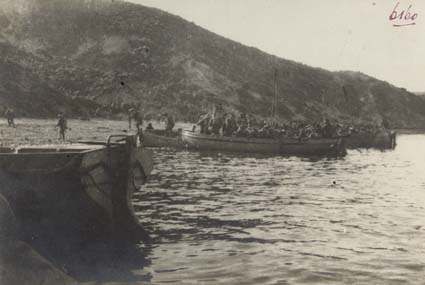 Further research: women poets of World War I feature in the Oxford Archive, in these feature articles, this blog (which ranges widely across countries), this survey with links, and this overview. Also about UK women generally and the war. Catherine W. Reilly, ed., Scars Upon My Heart: Womens Poetry and Verse of the First World War, Virago, London, 1981, was claimed to have been the first published anthology for 60 years. There is an article here from a US teacher.

Print This
Click here for all items related to: Reality of war, War literature