‘A tour de force investigation of Indigenous and labour history’, Honest History, 12 May 2020

This history is the product of the author’s many years of work and involvement with the Aboriginal people of the Pilbara region. It is a tour de force of historical investigation. There have been previous accounts such as Jolly Read and Peter Coppin, Kangkushot: The Life of Nyamal Lawman Peter Coppin, but nothing with the depth and thoroughness of Scrimgeour.

The author has accessed archival records with astonishing diligence and reveals the nuances of the story, particularly in the non-Indigenous reactions to the strike. Her descriptions of internal divisions on the issue within the Labor Party and the union movement, plus the (surprising?) activism of the conservative parties about the conditions of the Aboriginal people, are fascinating. And, of course, progressive Christians, in the Committee for the Defence of Native Rights and elsewhere, predictably outraged the supporters of the status quo.

As an example of this nuance, let us look at Scrimgeour’s analysis of the effects of World War II on the Aboriginal people of the Pilbara. Internationally, there is evidence that colonial peoples’ experience of that war (particularly among ex-soldiers) caused or sped up anti-colonial nationalism. In my experience, in some other parts of Australia, where Aboriginals were recruited as labourers and military auxiliaries, their meeting whitefellas from southern cities – who did not treat them with condescension – was illuminating and educational.

That was not the case in the Pilbara, however. As Scrimgeour shows (pp. 45ff), the war saw a period of heightened control over Aboriginals in the region; they were kept away from the troops (supposedly to protect the Aboriginal women). The argument that over-familiarity with the whites during the war had made Aboriginals ‘cheeky’ really applied to the persons of mixed race from the coastal ports, who benefited greatly from the labour shortages during the war. In fact, during this period the Aboriginals began to interact more equitably with the many small-scale miners and fossickers who were encouraged into the region by high mineral prices during the war.

Scrimgeour, in the first three chapters of this book, outlines the situation Aboriginal people found themselves facing on the stations before the war. It was a system of total control, with the Department of Native Affairs (DNA) effectively delegating its powers to a nexus between the police (often officially ‘Protectors’) and the pastoralists (cf Peter Biskup’s Not Slaves, Not Citizens). To leave stations, Aboriginal hands had to get permission from the pastoralists, a requirement enforced by the police. In the light of current mores, this system is indefensible; but not back then. Scrimgeour’s analysis of the Aboriginal condition adds a local flavour to the standard accounts of the pre-war situation by Ann McGrath, Born in the Cattle, and Amanda Nettelbeck and Robert Foster’s ‘Food and governance …’ paper in Aboriginal History in 2012.

And, of course, much was made of Don McLeod’s influence on the strike. The trope of the whitefella ‘stirrer’ being behind the Marrngu people was initially unanimously employed by the pastoralists, police and the department. The fact that McLeod was branded as a communist seemed to confirm this interpretation. This interpretation of affairs led the department and the police to pay great attention to McLeod and to harass him (and the Aboriginal leaders of the strike) with trivial prosecutions. Eventually, the High Court of Australia overruled the Western Australian Supreme Court ruling that it was legal for the Native Administration Act 1936 to empower officers, via the police, to charge a person for consorting with natives.

This court decision was a major factor in the non-Aboriginal events that paralleled the progress of the strike. It led to a brief period where the DNA attempted to broker a deal between the strikers and the pastoralists. With the strike itself, its longer-term effect was to break the DNA’s automatic support for the police and the pastoralists. By 1949, the DNA interpretation of the situation was that the strike was about the senior Aboriginal men trying to use it as a means of controlling their young people.

In 1977, I met Don McLeod and Dooley Bin Bin at Strelley station, then owned by the Pindan group. Ironically, in 1947, some of the strike leaders had been prosecuted for trespass on that very station. I wanted to talk about the strike but McLeod was only interested in his argument that the WA government owed millions to the Aboriginal people for the state abrogating its foundational 1890 constitution, which directed five per cent of government revenues to Aboriginal welfare. In 1984, McLeod self-published a book on the matter: How the West was Lost: The Native Question in the Development of Western Australia. His argument elaborated on the Committee for the Defence of Native Rights’ 1946 argument that WA’s Native Administration Act contravened the British 1833 Anti-Slavery Act. 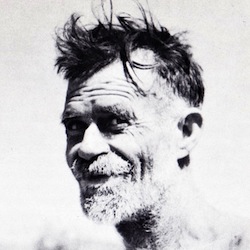 I have only one criticism of Scrimgeour’s work: it does not take sufficient account of the larger economic influences upon the strike. Part of the original pastoralist obstinacy against the strikers’ demands can be explained by the drop in wool prices when World War II ended. Most Pilbara sheep stations then were economically marginal (in terms of revenue, if not in capital value). Later, the Korean War led to a boom in commodity prices, which benefited the pastoralists and the Aboriginal miners alike. In 1951, six years after the strikers called for a wage of 30 shillings a week, the Pindan miners earned £500 000 from the sale of mineral ores. This boom ensured the strikers’ economic independence from the pastoralists.

As in the later Gurindji walk-off from Wave Hill, the Pilbara strikers originally called for an improvement in their conditions. After three years of struggle a good proportion of them were no longer focused upon pay and conditions in the pastoral industry. They wanted independence from whitefella control. In that they foreshadowed other, later, episodes of Aboriginal resistance.

In conclusion, I can only endorse Bain Attwood’s summary on the back cover of Scrimgeour’s book: ‘This is a truly exceptional book. The research is colossal, the analysis nuanced, the argument highly original, and the story-telling gripping.’ Amen. I doubt that anything I ever write will be as thorough as this volume by Ms Scrimgeour.