From the Honest History vault: Remembrance Day thoughts from Tony Abbott, recently re-appointed to the Council of the War Memorial

We put this up on the site three years ago, when Mr Abbott was first appointed to the Council of the Australian War Memorial. That was by a Coalition government; this time it was by a Labor government. Mr Abbott’s collected wisdom on war and its effects – particularly on him – gives an idea of what the government has bought for itself. Lest We Forget. (See also this from 2019 by Bobbie Oliver.)

As Tony Abbott, former prime minister, defeated member for Warringah, has been appointed to the Council of the Australian War Memorial, we thought it might be useful to link to some of his previously expressed thoughts on matters to do with war and commemoration. He is, after all, according to Minister Chester, ‘a keen war historian’. We dredged up these samples from the Honest History vault.

In August 2013, Abbott, as Leader of the Opposition, used his speech at the opening of the War Memorial’s Afghanistan exhibition to quote (after mark 24.0) Samuel Johnson’s remark that every man despises himself who has not been a soldier and that he (Mr Abbott) yearned to know more of the life of soldiers. This seemed to be support shading into sycophancy. On this occasion, he also said:

Conflict, it seems, is part of the human condition, and we must always be ready for it … This exhibition … shows the continuity of our martial tradition and of our national character. 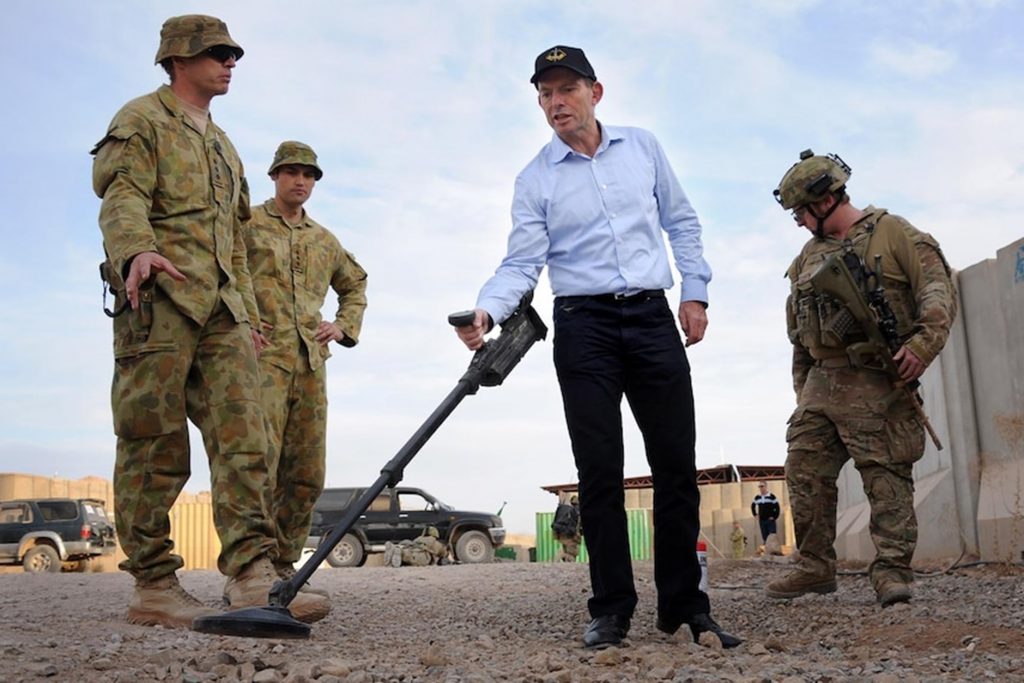 Opposition Leader Abbott lends a hand in Afghanistan, 2011 (ABC/ADF). This was the time of his profound comment on war: ‘Shit happens’.

Abbott’s prime ministerial remarks on terrorism showed remarkable similarities to those of United States President George W. Bush. His remarks on the nature of Australian civilisation – the one we were protecting against terrorism – came at about the same time and were widely quoted.

In 2015, the Prime Minister spoke at Villers-Bretonneux, France, to be the site of a pet project, the Sir John Monash Centre.

The Monash Centre had featured in a 2013 speech also, along with some other novel ideas.

I guess the question is, can and should we do more? There are a couple of projects which I think are worth considering. First, a national war cemetery in Canberra – Australians’ Arlington, if you like – in which significant ex-soldiers could be interred.

Second, a major interpretative centre on the Western Front – something that does for Australia and for the Australians who visit the Western Front in such large numbers these days what the Canadians have done to commemorate their extraordinary work in World War I.

These are questions that I hope we might ponder and decide in the next few months so that we can ensure that we go through the four years, if you like, of the Centenary of ANZAC with something to remember and with a lasting legacy, so that this generation has appropriately honoured the sacrifice, the service, the achievements of our mighty forbears.

As someone who has never served in the armed forces, never faced a shot fired in anger, and never lost close family members in war, I am in awe of the ANZAC generation who were tested almost beyond endurance …

We should be a nation of memory, not just of memorials, for these are our foundation stories. They should be as important to us as the ride of Paul Revere, or the last stand of King Harold at Hastings, or the incarceration of Nelson Mandela might be to others. We commemorate Anzac Day every year and will commemorate the centenary of Anzac over the next four years because the worst of times can bring out the best in us.

So there it is. Familiar themes repeated. Readers may like to compare them with the remarks of current Director of the Memorial, Brendan Nelson, speaking about Remembrance Day 2019. Other Honest History posts referring to Remembrance Day can be found by using our Search engine.