Domestic opposition to Australia’s involvement in the Vietnam War in the 1960s and early 1970s was a potent force. The opposition was a mass movement which attracted idiosyncratic individuals as well, such as the businessman Gordon Barton and the journalist Francis James. All sorts of unexpected people responded to the feverish atmosphere of the anti-Vietnam War years. From contemporary references in the Canberra Times we can recreate the history of one such unusual agitator whose eventual undoing demonstrates the enduring power of enforced conformity. 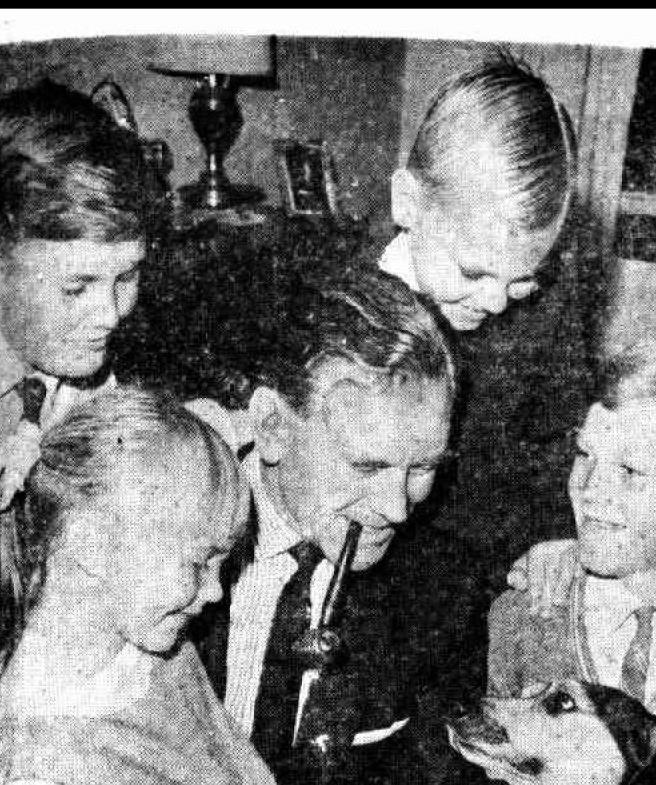 On Anzac Day in 1964 an article in the Canberra Times alerted the inhabitants of the national capital to the presence in their midst of a dashing British ex-military man. His full name was Douglas Webster St Aubyn Berneville-Claye. Everything about him was redolent of military honour and pride. The Anzac Day profile was based largely on information supplied by the subject of the article. It was a self-portrait in effect. What came across was a record of one man’s amazing service in World War II as commando, parachutist and saboteur.

Berneville-Clay had, he claimed, won the Military Cross for his role in Special Air Service raids against Rommel’s forces in North Africa. He had later operated behind enemy lines in Italy and also in occupied France as a result of which General Charles de Gaulle had awarded him the Croix de Guerre. In 1944 he parachuted into Germany where he operated as a spy in a variety of disguises until Berlin was liberated.

This was a highly impressive record but sadly it was just too good to be true. Berneville-Claye, in reality, was not a war hero at all. His Anzac Day profile incorporated a fair amount of invention. His actual military career, which was not exposed in its entirety until decades after he died of cancer in 1975, was dodgy in the extreme.

Berneville-Claye, who sprang from a working-class Yorkshire family which bore the simple name of Claye, indulged in repeated acts of reinvention as he set out to ascend the social ladder. This pattern of behaviour was evident during World War II. Armed with bogus claims of aristocratic connections and citing false academic qualifications, he was admitted to an officer training course. In 1942 he joined the Special Air Service. Thereafter things went off the rails. Captured by the Afrika Korps and ending up in a prisoner of war camp in Germany, Berneville-Claye seems to have thrown in his lot with his captors after his fellow POWs threatened to court martial him for being an informer. He allegedly was seen wearing an enemy uniform.

Unimpeachable evidence to try him for a very serious offence being hard to come by, Berneville-Claye was kept on in the British Army despite the alleged act of collaboration. The reprieve was short-lived though. He was court martialled three times for various offences and was eventually cashiered in 1946 and imprisoned. He already had form as a bigamist and had fathered children both in and out of wedlock.

Berneville-Claye migrated to Australia in the 1960s and ended up in Canberra. He got a job as a company representative, was a strong supporter of a local Boy Scouts troop and eventually settled in Tasman Close, Lyons. The calm was shattered when Berneville-Claye succumbed to a fatal bout of political infatuation. The spring and summer of 1966-67 comprised a turbulent period in Australian politics, with disaffection being fuelled by the federal government’s decision to send conscripts to support the United States in the Vietnam War.

A state visit from US President Lyndon Johnson in October attracted vocal protesters as well as sympathisers while Prime Minister Harold Holt’s campaign in the federal election in November was dogged by raucous demonstrators. The turmoil resumed in January 1967 when many of the same people protested against the visiting South Vietnam prime minister, Nguyen Cao Ky.

Berneville-Claye was enlivened by the growing current of anti-Vietnam War agitation. He loved to reinvent himself and the mounting excitement of the times tempted him to opt for a new persona. He may well have realised that his position as a supposed war hero was bound to ensure that his emergence as an anti-war campaigner would attract far more attention than it otherwise would have.

In a letter that appeared in the Canberra Times on 9 November 1966, Berneville-Claye announced that he had undergone a sudden political conversion. For nearly 30 years he had supported ‘Liberal policies or their equivalent’. This was no longer the case. He had come to share ‘the anxiety of a people too long ill-governed’.

Berneville-Claye as prisoner of war (BBC)

In the lead up to the federal election in November Berneville-Clay was ready to engage in direct action. Forty-eight hours before polling day he complained to the police about Liberal Party posters being placed on trees in Commonwealth Avenue. He claimed that they breached the Roads and Public Places Ordinance which banned the unauthorised placing of posters in public places. He was photographed tearing down a Liberal poster pasted to a tree in front of the British High Commission.

Berneville-Claye was undaunted by Harold Holt’s victory in the 1966 election. In a letter to the Canberra Times he urged fellow voters to hurl out ‘the Liberal oligarchy’ when they next voted in 1969. In the following month Berneville-Claye attended the protests against Ky. He was, he wrote in yet another letter to the press, bent on exercising his ‘inalienable right to object to entertaining him’.

On the afternoon of 18 January 1967 Ky travelled to the Hotel Canberra for a press conference. His presence attracted a group of 200 demonstrators who gathered around a Vietcong flag. There were clashes with police which led to three demonstrators being charged with offences. Berneville-Claye attended the demonstration as an observer and witnessed the fracas at first hand. He was sickened by the sight of ‘unparalleled brutality’ and said so to a newspaper reporter. A police officer, he claimed, had attacked a man who was crouching in fear.

Berneville-Claye considered that the afternoon’s events should be made the subject of a public inquiry. These critical comments left embattled ACT Commissioner for Police (Roy Wilson) feeling ‘very upset’. He demanded to know if Berneville-Clay had included his allegations in a signed statutory declaration.

Berneville-Claye was beginning to irritate the ACT police. There was no end in sight to his gadfly tactics. He might well have been appearing as a witness for the defence when the charges against the anti-Ky demonstrators were heard some time in the future. In these circumstances it behoved Berneville-Clay to act prudently, given his chequered past. He was well-advised to cut down on the amount of police irritation that he was generating. True to character, however, he did the exact opposite. He could not help himself.

On 6 March 1967, with the trial of the anti-Ky demonstrators still pending, a letter was sent to the ACT Commissioner of Police, Berneville-Claye’s nemesis. Its exact content is not known but the crucial thing was that it bore the signature ‘D W Berneville-Claye, MC, C de G, Major (ret’d)’. The ACT police could hardly believe their luck. Without having had to lift a finger they had been provided with irrefutable documentary evidence of Berneville-Claye’s tendency to convey untruths.

The letter to Police Commissioner Wilson, complete with the fatal signature, was sent on a Monday. By the end of the very same week Berneville-Claye was hauled before the Canberra Petty Sessions on a charge of having falsely represented himself as entitled to wear the Military Cross and the Croix de Guerre.

The Friday’s court proceedings were covered on the front page of the Saturday’s Canberra Times. Detective Inspector Harold Luton and Detective Sergeant Charles Kent, it was reported, had gone out to Tasman Place, where Berneville-Claye was forced to confess that he had received no wartime awards other than normal campaign service ribbons. Detective Sergeant Kent then provided the court with information supplied by New Scotland Yard which detailed aspects of Berneville-Clay’s real military history. Kent referred to the defendant being court martialled three times and cashiered from the army in 1946. ‘He had’, Kent stated, ‘convictions for unlawfully wearing military emblems, falsely representing himself to be a member of [His Majesty’s] forces, seven charges involving forged cheques, bigamy, stealing and fraudulent conversion’.

Berneville-Claye pleaded guilty and was fined $50 (equivalent to almost an average weekly salary at the time). The real damage though was done to his reputation. Highly embarrassing details of his personal history were available for all of Canberra to read at its leisure over the weekend. Berneville-Clay was finished for good in the national capital.

Berneville-Claye was nothing if not resilient. Discredited in Canberra, he upped stakes and moved to fresh territory where he could reinvent himself anew. He migrated to Campbelltown, outside of Sydney, and took up a teaching post at St Gregory’s College where he was soon highly regarded. After he died in 1975 the college honoured him by instituting a ‘Douglas Berneville-Claye Memorial Trophy’ which was awarded for debating and public speaking. The trophy lasted until 2008 when it was discontinued after the full story of Berneville-Claye’s unheroic past in World War II at last became known to the wider public.

More than 40 years earlier the ACT police had already been a wake up to Berneville-Claye but, had not politics intervened, they may well never have acted on their knowledge in the way that they did. Berneville-Claye in 1967 was collateral damage in the police force’s fraught interaction with anti-war demonstrators. It was his newly-forged association with turbulent Vietnam War dissenters, rather than any wrongdoing that he may have committed during World War II, that resulted in his being brought before the Canberra Court of Petty Sessions on 10 March 1967  with such embarrassing consequences. Only rarely do the dreams of a fantasist withstand the serried forces of law and order.