Marking the 60th anniversary of the Maralinga nuclear tests, Sydney displayed several First Nations events over the weekend of 8-9 October. In the forecourt of the Opera House two days of eclectic music, dance, performance, art and Indigenous food drew large crowds to Homeground.

Collisions, a film by Lynette Wallworth, was booked out, with people waiting in a queue for the headphones and virtual reality goggles. The result was total immersion in the remote Western Australian desert community where elder Nyarri Morgan lives with his tribe, the Martu people, several of whom were there for the show. Being able to look 360 degrees around the horizon, up at the starry sky, and down into rock caverns and waterholes was only the beginning of the experience; we could then watch Nyarri firing his grassland to take care of it and hear from him about his grandfather’s recollection that after the nuclear tests the people ate an easy catch of dead kangaroos and then ‘got sick’.

The film ends with Nyarri’s painting of a mushroom cloud, and Robert Oppenheimer reading from the Bhagavad Gita with tears in his eyes: ‘Now I am become death, the destroyer of worlds’. This is confusing. No nuclear tests were conducted in Western Australia. In 1964 the British ‘Blue Streak’ missile was fired from Woomera into the Western Desert but showers of radioactive particles did not fall on the inhabitants from a mushroom cloud as the film suggests. Martu people were relocated to ‘safer’ areas in the Western Desert where they began a homelands movement and since 1980 have re-established their communities. 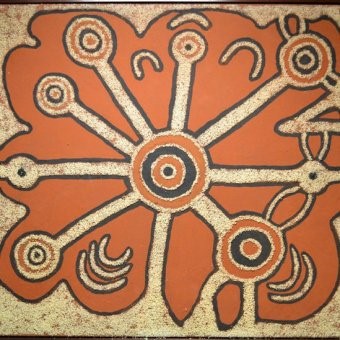 In 2007 Rio Tinto sold the proposed Kintyre uranium mine – which in 1994 had been excised from the Karlamilyi National Park – to Cameco and Mitsubishi, paying $21 million to the Martu people to ensure their silence during negotiations over their Native Title-determined country. Now Nyarri and several Martu women are resisting surreptitious encroachment by Cameco on their land, where the ecosystem’s ephemeral rivers, creeks and salt lakes are connected by a network of underground aquifers. ‘Forever that uranium belongs to that place, underground’, says one man, Wokka Taylor. ‘They should come here and find out what is happening on the ground before they make decisions about our country and our future’, says another, Muuki Taylor.

Up on Observatory Hill, mushroom clouds at the Monte Bello islands, Emu Field and Maralinga in South Australia are the real thing. For the 60th anniversary, the SH Ervin Gallery is showing Maralinga: Black Mist Burnt Country, a multi-media exhibition curated by JD Mittman (more on this). It makes an impression even more powerful than Collisions, combining historical film, photographs, painting and sculpture by more than 30 Indigenous and non-Indigenous artists.

An atomic test had already been carried out at Emu Field in South Australia in 1953, preceding Maralinga by three years, and others were done at two islands in the Monte Bello archipelago off the Pilbara coast in 1952 and 1956. Between 1956 and 1967, seven nuclear bombs were exploded at Maralinga, as well as more than 600 ‘minor tests’. Meaning ‘thunder’, Maralinga was where the heat of the blast vitrified the soil and the black mist depicted in Collisions actually hung over the land, causing illness and death among the Aboriginal people, and blinding Yami Lester (who appears in the show). The exhibition ranges across seven decades from the first atomic test to the present day and includes rarely seen paintings by Sidney Nolan, early Australian depictions of Hiroshima, and work in several media by Indigenous Australians.

All this coincides with the publication of Elizabeth Tynan’s Atomic Thunder: The Maralinga Story, launched at the SH Ervin Gallery (and reviewed here). And, lest we forget, the 50th anniversary of the establishment of Pine Gap.