The author came to Honest History’s attention when he wrote on Twitter that Anzackery ‘filled today’s military platoons’. We asked him to write for us at greater length. HH

I was born 18 years after World War II and was a young teenager during the Vietnam War. I enlisted in a peacetime army at 17 in a time when you could ‘sign up’ for three or six years. I am now in my 52nd year. I mention this only because of recent stirrings of a term that is new to me, ‘Anzackery’.

It’s interesting when a suggested new word instantly conveys to one a myriad of memories gained over 25 years of growing up around a veteran father. Some memories have been untouched for 30 years. I’m not going to relate my father’s full life story here, just the bare elements needed to discuss this theme.

My father was born in 1925 to a family that had immigrated from Scotland in 1820. He was born in Nambasa, Fiji, on a family plantation before settling back in Surry Hills, Sydney. He enlisted in the RAAF during World War II and served in New Guinea, where he was badly burnt when fuel drums exploded during a Japanese air raid. After the war he returned to Sydney but, finding the job market saturated, enlisted in the Army and settled into the Catering Corps. Life went on, he avoided the Korean War somehow, and was posted to Maralinga during the time of the British nuclear testing. I arrived during his posting to the Royal Military College, Duntroon, in the late fifties and sixties. 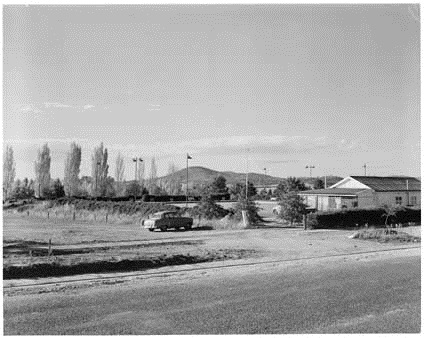 When my father left the army he settled into a still new, 50 year-old Canberra and raised his family of three. He worked several years at the Royal Australian Mint before starting a long career at Parliament House, interrupted only by his first bout of bowel cancer.

I could write much about the man. He remains my lifelong hero. But it is enough to say that I remember a solid man, popular with most, hardworking and devoted to providing a good life for my mother and us.

My teenage years saw the total disappearance of Dad for weeks at a time during parliamentary sittings in the days when both houses regularly sat till 4 or 5 am. During his week-long absences from family life I was also aware of the culture of the non-members bar where he worked. Subsidised drinks and open from 12 pm till one hour after House rise as written in Standing Orders. I believe this amenity simply carried on as a replacement for the popular military boozer.

There was one day of the year through the 17 years of my life I lived with a veteran father. A revered day, a day when Dad marched with ever-dwindling groups of veterans each year. Anzac Day. Out would come the special suit the evening before, mum would polish his five medals, three big round ones and two stars. Then he was gone before dawn.

In the seventies we would sit down and watch the marches on television, seeing the World War I veterans leading the parade. That leading group most noticeably declined over the years till they marched (were driven) no more. My father’s generation of World War II are at that point now and as long as I stay healthy I’ll probably witness Korea and Vietnam veterans ‘march no more’.

In hindsight, I had been raised on respect and reverence of Australia’s glorious fallen. I had shared the excitement and adventure with other teenage servicemen looking ultimately for the respect and credentials of their fathers or to sate a mythical indoctrination supplied by that generation’s teaching of history.

Which brings us back to Anzackery. Anzac Day: what started out as a Dawn Service of remembrance, a March (parade) of respect followed by an afternoon where returned servicemen joined to remember lost comrades, share a beer and play Two-up. I’ve always felt there were two halves to the average Anzac Day. A respectful, observant and dignified half and an irreverent debauchery of alcohol, slurred reminiscing and gambling. This seemed the norm with most of Dad’s fellow ex-serviceman under the squadron banner, charged with emotion and whatever demons were harboured within them from their experiences, and resigned to whatever reception they got home to, then another 365 days till that celebrated day. 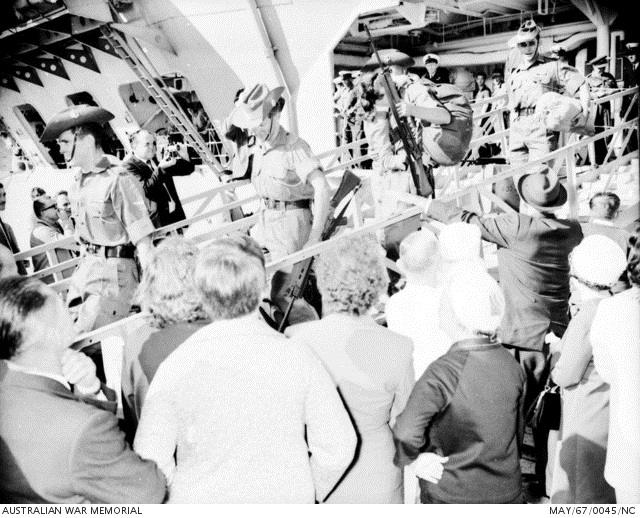 Troops of 6th Battalion, Royal Australian Regiment, returning to Brisbane from Vietnam, 14 June 1967 (Australian War Memorial MAY/67/0045/NC/DD May). There were 2000 relatives and friends at the wharf. Later an estimated 60 000 people watched the troops march through Brisbane

I can only speak from my own experiences. Anzackery as a definition struck a chord. It’s a tangible entity. Anzac Day is a sincere gesture from a nation to ‘those that have served’ and shows a national respect for those that ‘gave the ultimate sacrifice’. But I also believe it’s grown past respecting ‘the fallen’. For the years of peace between Vietnam and Iraq I watched the observance decline in sincerity to a day mostly of celebration and a holiday for the masses.

More and more Diggers’ medals were worn on the opposite breast by family members continuing to march for a departed loved one. It became an excuse to ‘celebrate the fallen’ by supporting the local publican or an opportunity to mow the lawns, depending on your non-service view. Not so much today, however, with the injection of a new generation of veterans from Iraq and Afghanistan.

The Anzackery concept has been nurtured carefully by successive Australian governments over a century. There has been manipulation of society’s views by the deliberate and selective curating of the school curriculum in history and promoting its celebration with great fervour and expense, I suspect expecting some sort of political advantage.

Successive governments have reaped the rewards of an ingrained public and social recruitment program to effectively supply their battalions. Since 1918, when hundreds of thousands marched on a ‘hallowed day’, through the years and with another war mid-century to bolster the March’s numbers, what started as a symbolic expression of respect and a drink for fallen comrades has been diminished by promotion of political ideology into a national day of military team-building.

The respect is diminished. Anzackery is a promoted concept now. It somehow – and I won’t use the word ‘glorify’ – normalises wars and, in doing so, attracts young people to military service without real thought as to the realities of conflict. Anzackery supports a national day now exploited by media, commercial enterprises and government. The solemnness is somehow shallow. 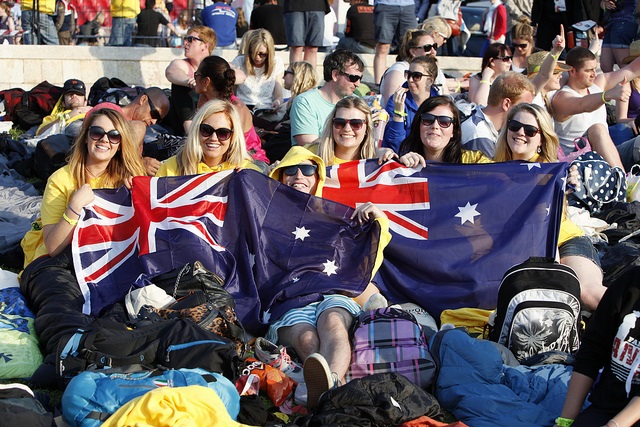 The average punter’s notion of patriotism has been entwined with Anzackery and directed towards ‘defending Australia’, being true blue and being willing to ‘answer the call’. It’s become a glorification of an anniversary no different to Cook’s landing. Anzackery, as well as Cook’s legacy of ‘Terra Nullius’, has stifled the honest historical research that is so important in developing an honest national identity. Anzackery, for whatever purpose, presents hundreds of thousands of dead soldiers as a cause for national celebration.

With Cook’s legacy and the resultant British invasion, Terra Nullius saw a loosely-estimated 100 000 Aborigines killed without a mention. One can only assume history is currently administered and distributed to the mob by people who regard this important history as a ‘black armband view’, not worthy of inclusion. They carry on instead with what could be described as a ‘white blindfold view’.

The 150 years of Frontier War, fuelled by colonial expansion, is not marked by any national memorials. No days are commemorated. No fallen honored. The media sees no value in it and the political powers restrict any exposure of historical truth, encouraging instead the spin of a selective chronology, a chronology hand-picked to promote British values with a well-defined social agenda.

These next few years will be defining for Anzackery. Into the history books will go the commemoration of every major battle during the ironically-referenced ‘war to end all wars’. The iconic March on a symbolic day will be a constant till 2018, where 100 years ago we tallied our overall dead and inscribed their names and military rank on monuments in nearly every town in the country.

As with my experience with returning Vietnam veteran family members and those I served with who ‘hung in there’, there seemed no Anzac support upon their return. The government wasn’t supporting Anzackery then; a government run by those of the second Great War, my father’s generation.

Will Anzackery see our servicemen sign up again to face our current foe? I doubt it. A three tour veteran of Afghanistan told me, ‘The first time was for the medals, the others a risky dash for cash’. It’s those first time participants that Anzackery attracts. The enthusiasm is apparently cured by experience.

My father once shocked me when I made him aware, back in the day, of my blooming anti-nuclear views. He said to me that he thought the first atom bomb that killed so many people was a ‘godsend’. When I asked how he could say that, he said, ‘We got to go home’.

I have his medals. I’ll pass them to my son.

* David Reid is a Canberra-born father of four, grandfather of two, ex-public servant who believes a more harmonious integrated national identity will form with the truthful telling of history.