Many codes, many circuses, much money: Griffith Review 53: Our sporting life

A review by Derek Abbott* of the latest Griffith Review, published 1 August 2016.

Griffith Review always presents a collection of writings that are at once stimulating and challenging, confronting and rewarding. This issue examines sport in our national life; as the editor Julianne Schultz notes, ‘Sport is now, for good or ill, the prism through which almost every issue is played out’.

Sporting success as a measure of national achievement dates at least from the late 19th century. The victories of our rowers and cricketers in competition with England allowed Australia to assert a positive identity, refuting sneers about our ‘poor stock’. Our first world champion was the rower Ned Trickett, the son of a convict. Sport, like military prowess, has been raised by some to a near mythical status that does not permit critical analysis. Colin Tatz’s essay examines the obstacles to a thoughtful examination of sport, while Stuart Glover notes that John Howard, in a skirmish on the flank of the history wars, nominated Bradman as the greatest Australian, an ‘icon’ whose career, in and beyond cricket, was not subject to critical assessment. 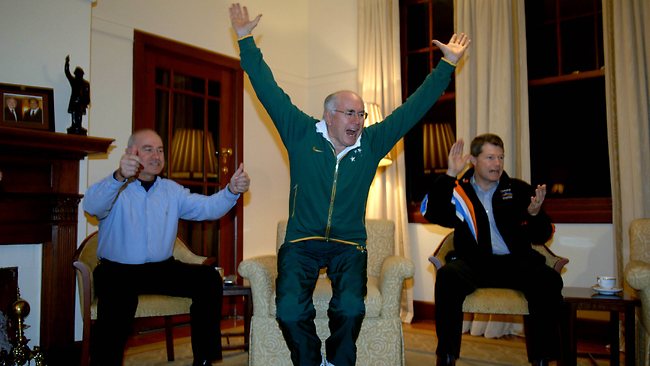 Prime Minister Howard, sports fan, 2006 (The Australian/Ray Strange). The tracksuit has been donated to the National Sports Museum at the MCG.

A number of essays dissect the evils of contemporary elite sport; to Colin Tatz these evils are ‘the unaccountable sporting behemoths like the IOC and FIFA; crass corruption in, and of, sport by vulturine commerce; grotesque “celebrity” behavior; peptides plentiful enough to harm horses; sledging that demeans the sledger’ and the rest – gambling, match-fixing, the win-at-all-costs ethos, racism and media overload. Tatz notes that ‘sport is such a key facet of our nationhood and psyche, it is a good measure of where we are in the growing-up stakes’. He concludes, sadly, that by that measure we are not doing well.

Taking David Williamson’s play, The Club (1977) as his starting point Gideon Haigh notes that sports governance – ‘the use and abuse of managerial power’ – has changed little in the intervening years. What has changed are the rivers of gold from commercial sponsorship that have flooded into the game. Haigh notes that 75 per cent of sports have ‘problematic sponsors’ – purveyors of junk food and booze and promoters of gambling – and asks, ‘How many reputations can sport launder before endangering its own?’ A recurring theme is the corrosive impact of the commercialisation of elite sport and its divorce from the communities that sustain it, as the source both of players and spectators

The essays abound with telling phrases: ‘big sport tends to address the public as a market to be monetized rather than a community to be nourished’; Tennis Australia is a ‘streamlined events management machine’; the Australian Football League is a ‘juggernaut’ presiding over a competition in which two-thirds of the clubs are unprofitable (Gideon Haigh). The AFL is ‘a media content organisation that creates and sells stories’ (Gregory Phillips and Matthew Klugman). For Scott Rankin, elite sport promotes a ‘barely concealed culture of immature violence masquerading as legitimate competitiveness’.

Moving on to current events along the River of January, Tracey Holmes describes the ‘Olympic bubble’, in which 8000 officials will manage 10 000 competitors, observed by 25 000 journalists, all of whom will enjoy ‘a suspended reality and the suspension of disbelief ‘ while protected by 85 000 security guards. The media will generate ‘coverage that pulls at the audience’s heartstrings … while advertising dollars click through the television till’. Nor does the International Olympic Committee care about the corruption, the diversion of resources from social imperatives or the long-term impact of the Games. It only needs to have these issues ‘suspended for the two weeks while the world is watching’.

Despite all of these criticisms – or indeed because of them: a good celebrity sex or corruption scandal sells advertising space – elite sport commands huge media attention; as Julianne Schultz notes, ‘it is omnipresent. There is more reporting in the media on sport than in any other interest area; even politics takes second place.’ 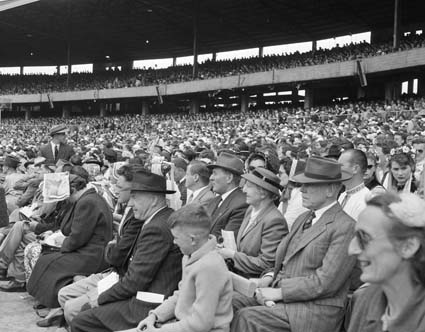 For politicians, identification with sport is now almost de rigeur. John Howard pottering about in his (unearned) Wallabies tracksuit seemed to view his role as being Australia’s premier sporting spectator, which did him no harm. Tony Abbott’s almost obsessive exercising was a plus in terms of his public image (unlike his choice of swimwear) while even less overtly sporty leaders seem to need the identification with a game or a team as necessary proof of their Aussieness and hence electability. In contrast, Paul Keating’s more cerebral enthusiasms – architecture, French clocks and Gustav Mahler – were enough in the minds of many to damn him as ‘not one of us’. It would be a bold political leader who would take up Gideon Haigh’s implied challenge with regard to public funding of our participation in the Olympics when the Australian Olympic Committee ‘controls a foundation worth $140 million and [its Chairman] earns nearly $700 000 a year’.

Stuart Glover, in a thoughtful examination of sport, the symbols of masculinity and their use by politicians in establishing authority, perhaps takes political analysis a step too far and confronts the reader with the lycra–clad ‘normativised and normativising genitals’ of former Prime Minister Abbott, part of a ‘camp performance of an exemplary masculinity’. It is a relief to discover that Malcolm Turnbull is, in terms of image at least, a throwback to an earlier time when the ‘political class exercised and experienced power through direct material control’ and a well-cut suit was sufficient.

Why do we, as spectators, bother? It is our willingness to put our bums on seats in the stadiums or in front of the TV and fork out for merchandise that drives the flow of money. Tracey Holmes offers one explanation: ‘the planet’s television watching population will be momentarily transported to a mythical place … It is a thing of mastery, a thing of beauty. It is human kind excelling. It is a display of perfection … In this bubble the world is a joyful place.’ Elite sport offers an escape from the humdrum with which we can identify; most of us have swung a bat or racket, kicked a ball, swum a few laps or pedaled furiously to the next set of traffic lights while dreaming of Alp d’Huez, Wimbledon or the MCG.

For some people that escape is very real. Annie Zaidi writes of the rise of women’s wrestling in India, where the success of Indian women in international competition has provided a way out of the village. More broadly, participation in sport in a restrictive social environment ‘is a way of asserting one’s right to equality’ and, as the wrestlers have found, bringing success and status can at least mute opposition.

Other memoirs and essays explore participation in sport at a very personal level. Paul Mitchell seeks to come to an understanding of his sometimes violent and abusive family and his own experience of bullying, both as victim and perpetrator. Ellen van Neerven reflects on sport and queer identity through women’s soccer in the suburbs. Geoff Woolcock makes a plea for the virtues of ordinary team sports; cooperation and competition are wonderful things when you are playing for pleasure. Josh Chiat explores the assertion of Jewishness in inter-war soccer competition in Perth. Ironically, there sport promoted an acceptable ‘Jewish identity in an Australian society in which public displays of Jewishness were discouraged’.

Creating an ‘acceptable identity’ has all too often been the experience of Indigenous Australian when playing sport. As Adam Goodes has discovered, Aboriginal players are, in Colin Tatz’s words, all too often ‘commodities appropriated to make them part of “us’’’. When ‘they’ fail they are history and if ‘they’ assert an identity that challenges that commodification they will be reminded of the racism that lurks just below the surface in much of Australia. Phillips and Klugman dissect this aspect of our sporting life with regard to the AFL and the opportunities wasted to promote a social justice agenda. 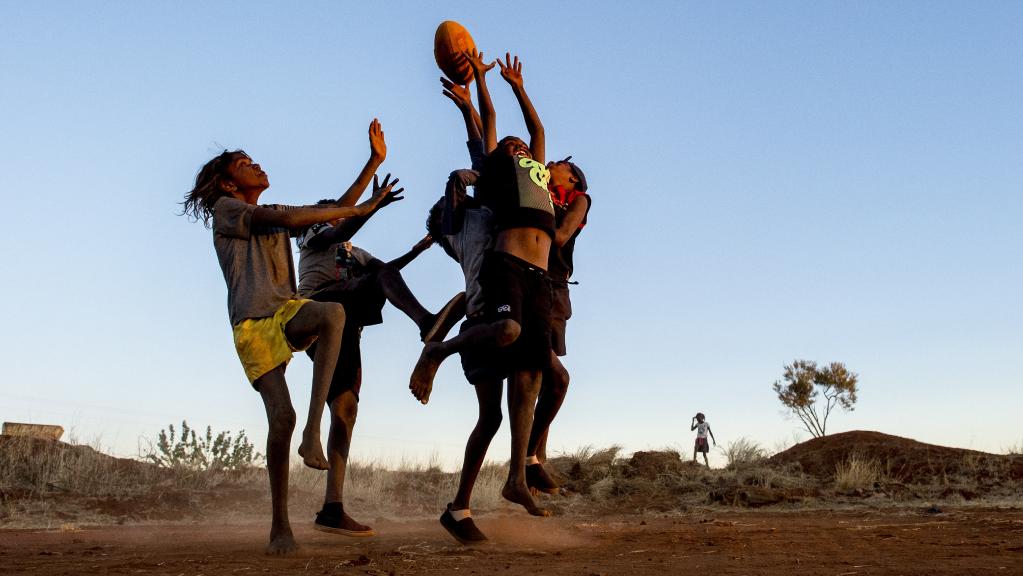 If readers are beginning to despair, they should turn to Tim Butcher and Barry Judd’s essay on Indigenous football in Central Australia, a sport which is characterised by immense enthusiasm and commitment, tempered by a culture which respects country, values participation and minimises body contact while emphasising style. The authors conclude that ‘when Australian football could do with an injection of creativity and innovation, the Aboriginal football ethic is breathing fresh life into the game’. Sean Dorney argues that the National Rugby League could do more good than much of Australia’s aid program (and its detention policies) if it provided support and encouragement for rugby league in Papua New Guinea and improved access for PNG players to Australian competitions.

The benefits of participation in sport to the individual and the community at the local level – where sport is largely run by volunteers – can be measured in social cohesion, employment and health. The contributions to this collection demonstrate the vitality of writing about sport in Australia and the positives that can flow from sport at its best. Sadly, elite sport exemplifies much of the worst and it is missing a huge opportunity to contribute productively to society rather than merely profiting from it.

Print This
Click here for all items related to: Expressing ourselves, People like us, The sweat of our brows