This post is by way of being a ‘soft launch’ for a new Honest History series. We are using the series to explore a crucial question: whether what happened at home in Australia during the Great War was actually more important than what happened overseas on battlefields. More important in the effect it had on Australia, on individuals, on families, on social structures.

This suggestion challenges the dominant interpretation of Australia and the Great War, which for a century has focused on the exploits and fate of young men in khaki, many of whom died on Gallipoli, on the Western Front or in the Middle East. But was their service the most important aspect of Australia’s Great War? Should it remain the dominant narrative? Is the real story what war did to us – to Australia and Australians and to the rest of the world – not what we did in war?

We are approaching this question from the direction of Yarram in Gippsland, Victoria, with the help of a couple of posts from Phil Cashen’s excellent Shire at War blog. One post covers the recruiting meeting held at Yarram on 5 July 1915. This meeting followed a bipartisan call in the Victorian Parliament for increased recruiting efforts. The local MLA, Thomas Livingston, addressed the Yarram meeting. The parliamentary appeal had concluded with the words of Kipling:

Take up the white man’s burden;

Have done with childish days;

Comes now to search your manhood

Through all the thankless years,

The judgment of your peers. 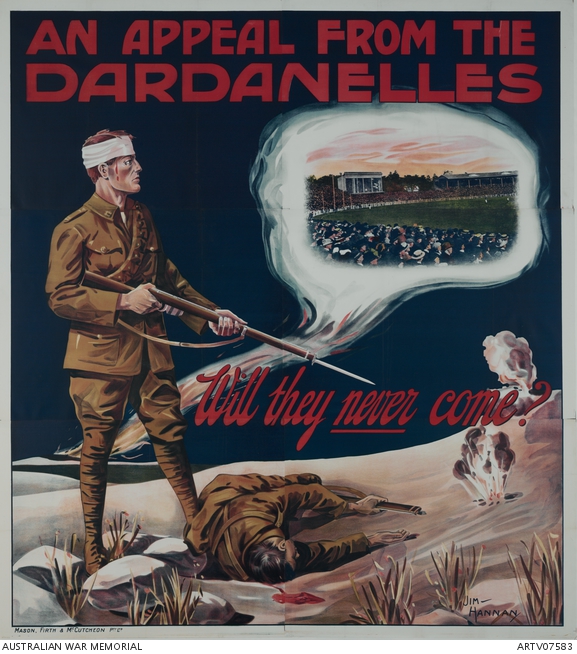 Shire at War notes that these meetings, in Yarram as elsewhere, were intended to involve the community as well as round up young men for the AIF. Large posters tugged at the emotions. German barbarity was emphasised, contrasted with the virtue of the British Empire. There was an element of frustration that recruitment meetings were even required. There were heavy hints that conscription would be necessary.

The Yarram meeting planners and speakers – predominantly the leading citizens of the district, as Shire at War‘s research shows – made remarks that pointed up the divisions in the community. There were unmarried slackers playing football and married men doing the right thing; drunken pub lizards and clean-living soldiers; those who avoided their obligations under compulsory military training and those who did their time; men whose teeth were so bad they would fail the medical and sound young men with sparkling white teeth; those who did not enlist and those who did; ‘shirkers’ and ‘patriots’; the local elites who did the spruiking and the broader base of citizens who responded – or not; those who gave in to the pressure and showmanship of the recruiters, or of their own peers, and those who did not and quietly kept their heads down at home; those who thought war would be a great adventure and those who read the casualty figures and thought of other things to do.

These divisions underlay recruiting efforts throughout the war; numbers never again reached the levels of July 1915, as the figures in Appendix 2 of Joan Beaumont’s Broken Nation (drawn from Ernest Scott’s volume of the Official History) show. The Victorian recruitment figure for July 1915, 21 698, was by far the largest figure for any month for any state throughout the war.

Footnote: the author’s great-grandfather, the Hon. HJM Campbell, MLA for Glenelg in the Victorian Parliament, made a rousing speech at a recruiting meeting in Portland on 10 July 1915. Four days later, his son, Captain SJ Campbell of the 8th Light Horse, was wounded while swimming in Anzac Cove and died the same day. On 1 July, Captain Campbell (Syd) had written to his sister, Hettie:

We have seen enough and lost enough to realise what a horrible, disgraceful thing war is. Sometimes when one sees some fine young chap with a ghastly wound one wonders whether any quarrel between any nations is worth bothering over to the extent of killing even one human being … What awful foolishness it seems, and the individual only counts as an instrument to direct and pull the trigger of a rifle or some other machine. (Quoted in John Hamilton, Goodbye Cobber, God Bless You.)

HJM Campbell would not have read the letter until after Syd’s death – and after the rousing speech.