This article describes one example of community activity which is questioning the received, official view of Anzac, as set out in, for example, the Australian Government’s Anzac Centenary website. We will provide space for community groups presenting differing views on this subject. HH

The Gallipoli Centenary Peace Campaign (GCPC) was formed in mid February 2014 as a result of a meeting between the Marrickville Peace Group, Marrickville Residents for Reconciliation, Pax Christi and the Marrickville Greens. Since that time a number of local individuals have also participated in the coalition’s meetings and events. 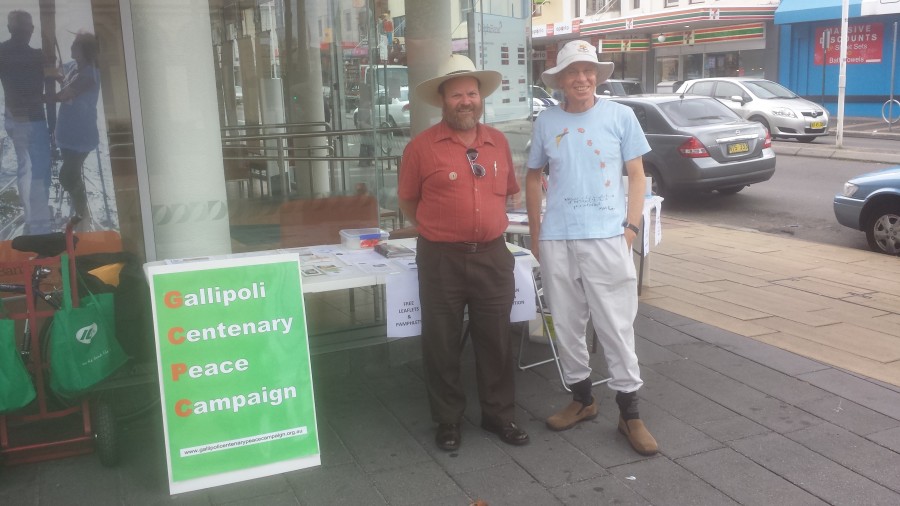 The incentive for the coalition’s formation was the impending Anzac centenary. The official website of the centenary describes the commemorative program from 2014 to 2018 as offering ‘all Australians the opportunity to honour the service and sacrifice of all those who have worn our nation’s uniform, including the more than 102,000 who have made the supreme sacrifice’. In addition, it asserts that World War I, especially the Gallipoli campaign, helped to ‘define us as people and as a nation’ and it encourages ‘all Australians to reflect upon and learn more about Australia’s military history, its costs and its impacts on our nation’.

As a coalition, GCPC contains a variety of perspectives on the Anzac centenary program, Australia’s military history and the prevention of war in the future. While all parties within GCPC recognise the legitimacy of remembering those who died or were wounded while serving their country in war, they also share a critical stance towards the Anzac legend and the shadow it casts over commemoration, our history and our ability to truly reflect upon Australia’s military engagements, their costs and their impacts.

Indeed all parties within GCPC share the view that the Anzac legend, especially in more recent times, has served to distort genuine commemoration, historical inquiry and public discourse on the causes of war and its devastating impacts and consequences. In our opinion, official government claims that World War I helped ‘define us as people and as a nation’ is evidence of this, as is the incongruity between promoting such a historical myth and the goal of learning more about our military history and its impacts during the centenary commemorations, as the late Governor Peter Underwood noted.

The formation of GCPC was in part inspired by the timely release of two publications: one was Joan Beaumont’s Broken Nation: Australians in the Great War and the other was James Brown’s Anzac’s Long Shadow: The Cost of our National Obsession.

Broken Nation emphasises the destructive impact of World War I on Australian society, hence denying the official view that the war was a creative phenomenon that defined us as people and as a nation. Beaumont’s study reveals the true extent of the obscene slaughter produced by industrialised warfare, as well as the bitter social divisions the war created at home.

Anzac’s Long Shadow condemns the national obsession with Anzac, along with the excessive amount of money being lavished on the centenary program. Brown estimates that the ‘celebrations’ are likely to cost $325 million with a further $300 million to be raised from corporate donations. For Brown, Australians are ‘embarking on a discordant, lengthy and exorbitant four-year festival of the dead’. In contrast with the growing popularity of Anzac Day, Brown laments the public’s ignorance about the military and its operations in recent wars such as Iraq and Afghanistan.

Other sources of inspiration underpinning GCPC’s formation included organisations such as Honest History, Medical Association for the Prevention of War, Melbourne’s Anzac Centenary Peace Coalition and the Independent and Peaceful Australia Network. All of these inspiring voices have articulated alternative narratives to the official version of Australia’s war experiences and history. 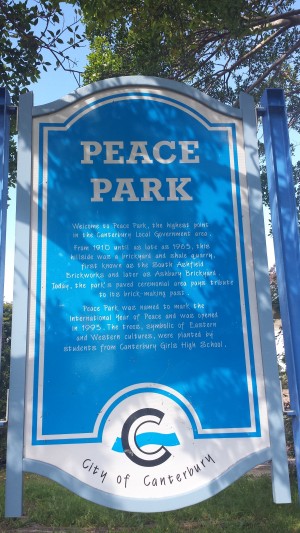 Not surprisingly, GCPC’s Mission Statement and program of activities was the product of these critical voices, combined with the existing objectives that the four groups brought to our coalition.

Over a period of two to three months, the following program was devised:

While all participants in GCPC are volunteers, considerable progress has been made both organisationally and with respect to our program of activities.

We have developed a website and Facebook page which combine news about the centenary program with updates on our activities, together with a range of references and other resources plus notices about future events.

In conjunction with the official launch of GCPC, we held a successful public forum on 5 August on the topic ‘Anzac – Why does it last?’ Also we have gained the support of Marrickville Council to explore community support for establishing a local Peace and Reconciliation Park. As well, we have obtained Marrickville Council’s agreement to co-host a public debate in April 2015 on the topic, ‘The Anzac legend, political agendas and legitimising war’.

Our current projects include the following: (a) fostering a greater appreciation of dissenting voices during World War I and the war’s divisive and debilitating impacts, mainly in the Marrickville local government area, and (b) distributing a set of lesson plans and other resources to local secondary schools designed to encourage students to think critically about Gallipoli, World War I and the devastating and enduring effects of war. (Refer to the lesson plans entitled The Enduring Effects of War developed by MAPW Victoria, Act for Peace and the History Teachers’ Association of Victoria.)

Our Mission Statement and details of all our campaign activities can be obtained via our website and Facebook page.

Jon Atkins is secretary of GCPC.