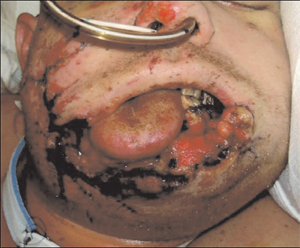 In Australia, a volume of the Official History of World War I (published 25 years after the end of the war) has some pages of photographs of facial injuries and surgical reconstruction techniques as well as extensive text on these matters (AG Butler, The Australian Army Medical Services in the War of 1914-1918: Volume III: Special Problems and Services, Australian War Memorial, Canberra, 1943, between pp. 320 and 321). See also the photographs at https://www.awm.gov.au/collection/P06131.001/ to https://www.awm.gov.au/collection/P06131.011/ (eleven images altogether; source: Australian War Memorial, public domain). Also Google Ernst Friedrich war against war.