KEY FINDINGS:This year’s Poll has recorded the lowest feeling of safety among Australians, and the sharpest decline in optimism about the nation’s economic performance in the world, in our 11-year polling history. A majority (69%) see Islamic State as a high risk to Australia’s security, and 69% support Australia’s military participation in Iraq, while only 20% think it makes Australia safer from terrorism in the future.The Poll has recorded the third consecutive rise in Australians’ concern about global warming. 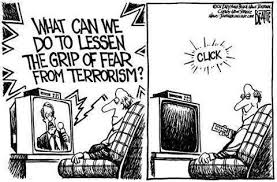 The full text of the poll report is linked. The report covers terrorism, Islamic State, the performance of the Coalition Government, the economy, foreign investment, China, the US alliance, Indonesia, the death penalty, climate change, overseas aid, Papua New Guinea, the United Nations and other issues.

Lenore Taylor in Guardian Australia anticipates some of the issues addressed in the poll, Michael Safi summarises the findings, as does Daniel Flitton, while Victoria Rollison on the Australian Independent Media Network comments after the poll. Recent posts on related subjects are here (Richard Ackland on national security surveillance) and here (Jeff Sparrow on anti-terror legislation, including a footnote of links to many relevant sources). Carmen Lawrence’s book, Fear and Politics, is perennially relevant.