Honest History: The national history curriculum and the Coalition

The national history curriculum and the coalition: Honest History Factsheet

Prime Minister Paul Keating said that when you change the government, you change the country. Do you change the curriculum as well? This article brings together some sources that may help with an answer to that question. In each case, there is a quick summary of the article, with quotes as appropriate, and a link. (In our next e-Newsletter we hope to match up the Resources section of the Honest History website with the current national curriculum in history. Our website will have a section called ‘Teaching history’.)

In January 2011, Coalition spokesman, Christopher Pyne, said this, as part of wide-ranging criticism of the national curriculum:

If elected at the next federal election, it would be my intention to initiate a review of at least the history discipline in the national curriculum to ensure that it achieves the all important goal of filling young minds with the knowledge of why Australia is like it is today. In other words, how did our society develop, from what well spring did we come and what are the foundations for our Western society that is the envy of so many around the world? 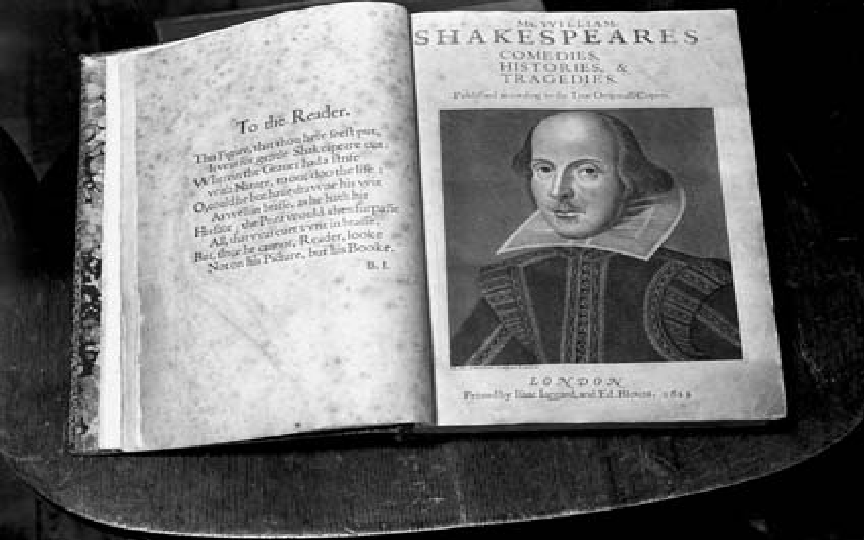 First Folio edition of Shakespeare, printed in 1623. The Public Library of New South Wales, Sydney. The folio was presented to the library in 1885 by Mr Richard Tangye and Mr George Tangye, of Birmingham, England (source: National Archives of Australia A1200, 11656429; photo 1948)

I think the national history curriculum fundamentally misses the point of teaching our young people why Australia is as it is today, which is because of our history of Western civilisation and our Judeo Christian ethic, yes. I know that’s not a fashionable thing to say on the Q&A audience but it is true and I do think the national history curriculum was certainly written by an ex communist [Professor Stuart Macintyre] and I think the first offering was very left-wing, I wouldn’t describe it as Marxist but I think, yes, it doesn’t necessarily reflect the kind of country we are.

My point is that in Reception and Year 3, Anzac Day is lumped in with NAIDOC Week, Reconciliation Day, Harmony Day, Ramadan, Buddha Day, Easter, as just one of those days that is worth noting, now it’s not …

For the first time in Year 9, in Year 9, the Anzac tradition is mentioned in the curriculum. Now my point is that Anzac Day is the first time in Australia’s history that all the states came together in one conflagration and fought as Australians together, at Gallipoli. Now, whether you liked the war or not, whether you liked the battle or not, the fact that there were thousands killed is a very bad thing, there’s no doubt about that but it’s a very important historical event in Australia’s history and it doesn’t rank alongside all of those other days in equal importance.

He also said this in April: ‘History is what it is. We should know the truth about it and we shouldn’t allow it to colour our present and our future.’

In August 2013, the Coalition released its education policy which said that

under Labor the curriculum has become politicised. For example, the current curriculum suggests that our students are best served learning about the day-to-day activities of trade unions and the history of the Australian Labor Party.

For example, the curriculum contains two references to trade unions, four references to progressive ideas and associated movements, and the only Prime Minister to be explicitly referenced is John Curtin.

There is no explicit mention of the conservative parties in the curriculum. The Coalition will achieve the right balance and ensure that our students learn educational basics and important fundamentals about our nation’s history and structure.

Then Opposition Leader, Tony Abbott, paraphrased the policy in an answer to a question at the National Press Club. 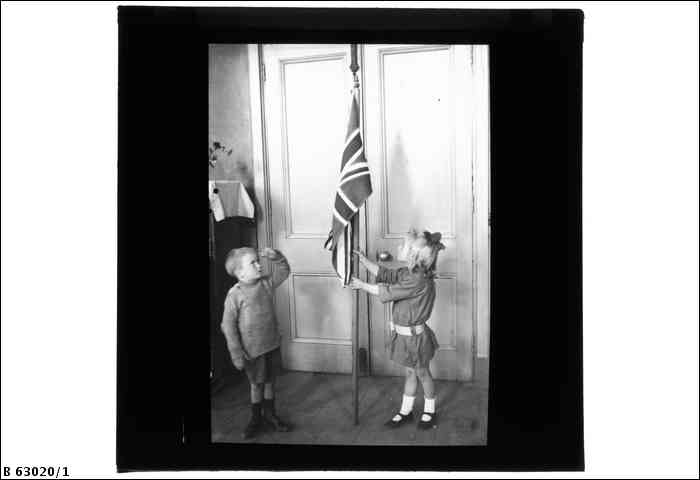 A young boy salutes the Union Jack on a flag pole held by a young girl, c. 1912 (image: National Library of Australia Trove/State Library of South Australia, B63020/1)

In January 2011, a spokesperson for the Australian Curriculum, Assessment and Reporting Authority (ACARA), which is responsible for developing the curriculum, said Mr Pyne’s accusations that curriculum writers had neglected the history of Western civilisation were ‘patently false’. In September 2012, ACARA made a similar comment in response to former Prime Minister, John Howard.

In July 2012, Dr Louise Zarmati of the University of Western Sydney, corrected a number of alleged errors in Mr Pyne’s remarks on Q&A, particularly the suggstion that the history curriculum was written by Professor Macintyre, rather than by a team, and that the curriculum downplayed Western civilisation. There were 38 comments on her article. (Dr Zarmati helped write the curriculum documents.)

In April 2013, Crikey’s Bernard Keane considered Mr Pyne’s comments and felt there was little risk of Anzac being underplayed in Australian society. To Mr Pyne’s remark about the nature of history, Mr Keane responded sarcastically: ‘Damn right. History has nothing to do with the present or the future. Nor is it ever contested. It “is what it is”.’

On the other hand, Dr Kevin Donnelly of the Education Standards Institute said the curriculum downplayed ‘the impact Anzac Day and the Gallipoli legend have had on forming an Australian identity. “Australia and our character is ignored in the history document, because it’s all about diversity and difference and multiculturalism and different perspectives,” he said. “It’s a very one sided, politically correct view of Australian history and I would argue we need to get back to a stronger sense of what has made Australia a unique nation.”‘

In response, ACARA denied that Anzac was downplayed: ‘History students have opportunities to learn about Anzac Day and Australia’s experiences in wartime at the following year levels: 3, 6, 9 and 10 and in the senior secondary subject Modern History’.

After the release of the Coalition’s policy and Mr Abbott’s remarks, Dr Louise Zarmati and Education Minister Shorten commented as did Professor Macintyre and Professor Tony Taylor. Professor Taylor, another architect of the history curriculum, denied the curriculum lacked material about ‘Western civilisation’ and that it gave more space to Labor than Liberal prime ministers or trade unions than capitalism. He added: ‘The point always when writing a curriculum document of this kind is to avoid overloading it with specifics. Good teachers will know how to handle the details.’

Meanwhile, there was an exchange between Professor Taylor and the Institute of Public Affairs (IPA). This later article is relevant.

Finally, there is the judgement of PolitiFact Australia, ‘a non-partisan, independent journalistic venture run by Peter Fray, the former editor-in-chief of the Sydney Morning Herald, and staffed by experienced reporters and researchers’. The PolitiFact article (dated 5 September 2103, written by Chris Pash) is headed, ‘Are the history wars really history? Abbott thinks not’ and it assesses Mr Abbott’s claim at the National Press Club that ‘[t]he national curriculum for history has been politicised [under Labor]’.

PolitiFact found Mr Abbott’s claim ‘FALSE’, defined by the site’s ‘Truth-o-meter’ as ‘The statement is not accurate’, which is one grade above ‘PANTS ON FIRE – The statement is not accurate and makes a ridiculous claim’. The article has a number of quotes from Professor Macintyre describing the function of the national curriculum. The article concludes:

PolitiFact could not find evidence of “politicising” of the national history curriculum. The Coalition’s examples are taken from one part of the curriculum, the years to year 10. However, the current version of the national curriculum, both the junior and senior sections, contains references to politicians of many political flavours and was established with the agreement of all governments from both sides of politics in Australia.

The curriculum is a guide for teachers and concentrates on building student capabilities. The teachers on the ground will choose the political and other people to study, depending on the topic.

The lead writer of the history curriculum [Professor Macintyre] says claims of politicisation are absurd. Additionally, senior conservative figures such as Robert Menzies and ideas such as capitalism are referenced. John Curtin is not the only prime minister mentioned as an example. There is no evidence that the “day-to-day activities of trade unions” will be studied. The “progressive movements” topic in Year 10 includes ideas such as capitalism and nationalism.

We rate this claim as False.