Cultural policy – an idea for the PM and Minister Burke: look at the structure of government

There was media last week noting the PM’s comments on cultural policy.

“The national institutions have been starved of funds”, he said. “These are national assets that are a very important part about our fabric. And so, that is something that the government will give consideration to in the lead-up to the May Budget.”

We look forward to the promised imminent statement from the PM about cultural policy.

The issue, however, is not only about additional funding but also about the structure of government and how it impacts on Budget outcomes. In September 2022, on behalf of Honest History and Heritage Guardians, I put this submission  to the National Cultural Policy inquiry.

My submission is formed by

(i) nine years managing the website honesthistory.net.au, dedicated to the proposition that Australia is more than Anzac – and always has been

The submission addresses just one of the ‘pillars’ set out [by the government in its background papers on the cultural policy inquiry]: ‘Strong institutions: providing support across the spectrum of institutions which sustain our arts and culture’. The submission proposes that this pillar will be supported by moving the Australian War Memorial from the Defence-Veterans’ Affairs portfolio to a culture or arts portfolio.

Alison Broinowski and I said this in chapter 20 of The Honest History Book (2017):

‘[W]e should “level the playing field” between the institutions that promote Anzac (and flirt with Anzackery [the extreme, jingoistic version of the Anzac legend]) and the other cultural institutions that deal with the broader spread of our history. At the federal level, the Australian War Memorial should be removed from the Veterans’ Affairs portfolio (under the Defence umbrella) and returned to a cultural portfolio, from one of which it was excised more than 30 years ago [following RSL lobbying of Prime Minister Hawke].

This change, plus making the War Memorial Council more representative of Australia, and less like the governing body of a military club (11 out of 13 current members being ex-military, or former Defence Minister, or former Prime Minister with a yearning for military things), would help the Memorial become again the possession of all Australians, not just of military buffs and recent veterans.

Note also, since that submission, the ABC has produced a very useful graph about relative funding of the War Memorial and other cultural bodies: 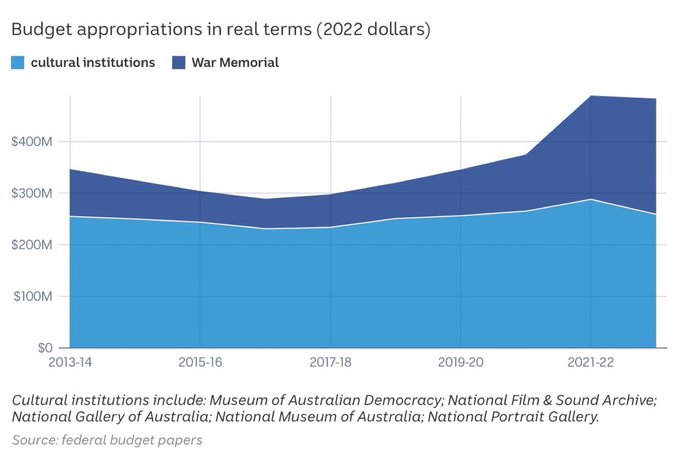 David Stephens is editor of Honest History and convener of Heritage Guardians.