Thoughtful analysis of the national (and international) mourning said to be following the death of Hughes. Concedes his youth, likeability and talent and the tragedy of his death, including for Sean Abbott, the bowler, but goes on to question aspects of the event.

The overblown response of the entire media, political and sporting establishment, however, deserves scrutiny. From the time Hughes’s injury was reported, immense resources have been devoted to elevating the story of the young cricketer from a country town, striving to realise his ambitions but “struck down in his prime” to nothing short of a national calamity …

By the time his death was announced, a large proportion of the Australian population had been thoroughly enveloped in the narrative about his life presented by the multi-million dollar cricket business, political leaders, and the mass media. Those not initially swept up in the public displays of emotion came under immense social pressure to join in …

Millions have been led to genuinely believe they “felt” the loss of Phillip Hughes. The mass mourning, however, reflected a complex interplay of emotion and unconscious social attitudes. Above all, the understandable empathy of ordinary people with the family and friends of a young man who lost his life was exploited, and then amplified, by the general obsession with “heroes” that is constantly cultivated in sport.

Goes on to explore the links between sport and nationalism.

Few are conscious of just how much sport is subliminally linked to one of the key tenets of Australian nationalist mythology: that the country’s “national identity” was forged in 1915 by the Australian “Anzac” soldiers on the battlefields of Gallipoli. Sports stars are regularly held up as the modern day embodiment of what World War I propagandist Charles Bean declared the Anzacs represented: “reckless valour in a good cause, for enterprise, resourcefulness, fidelity, comradeship, and endurance”.

Phillip Hughes is well on the way to becoming deified as the quintessential Australian hero and moulded into the Anzac legend. The front page of last Friday’s Australian featured the disturbing photo of the young cricketer transposed in front of the Australian flag, bat on shoulder, looking upward, his face illuminated by a ray of light seemingly descending from the heavens. (see below)

The article concludes by exploring aspects of cricket administration and financing.

An article recalling the death of cyclist Russell Mockridge in 1958 serves as counterpoint. See also Jim Davidson and Jonathan Horn on comparisons between sport and war, Humphrey McQueen on Hughes’s death as a workplace accident (and comparisons with the treatments of other such accidents) – McQueen extends the argument into a plea for proportionate responses to all sorts of things, including deaths in war – and an Australian War Memorial curator on an exhibition there from 2006 on Sport and War (scroll down for link to audio). An article which presents a short history of public mourning, very relevant to the Hughes and related incidents. 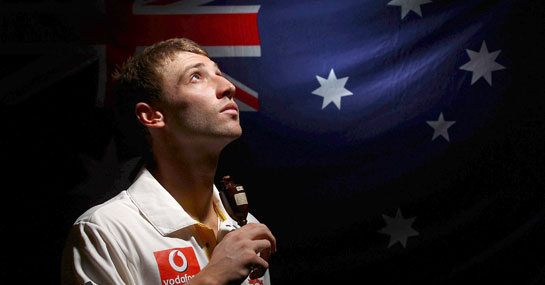