Beatrice Eva Jauncey, previously Fripp, nee Edmonds, was born in Christchurch, New Zealand, in 1895, one of eight children. Her father, Thomas Edmonds, became wealthy from the manufacture of a superior brand of baking powder – the ‘Sure to Rise’ slogan was well-known throughout Australasia and there were cookbooks, as well – and later became known for his philanthropy and support for architecture in Christchurch. (This family wealth seems to have made Beatrice a woman of some means and led to Leslie’s description of her as ‘by no means economically depressed’.)

We have found a family picture from 1903 (here at page 4) and Beatrice, aged 8, is the younger of the two girls in the front row (information confirmed with family)*. During World War I, Beatrice and her sisters Gertrude, Irene and Lillie were in Sydney, where they entertained the troops as ‘Cheer-O Girls’. The Muswellbrook [NSW] Chronicle (6 October 1917) was obviously impressed when the Girls went ‘on the road’:

THE “CHEER-OH” GIRLS. On Tuesday night, the 2nd inst., famous “Cheer-oh” Girls visited Denman and gave a most attractive and interesting concert at Day’s Hall, in aid of the War Chest Fund. The artists, seven in all, under the leadership of Mrs. Bennett White, are to be highly complimented on their efforts and for their patriotism, as they have to date raised about £2,500 towards patriotic funds. The rain-storm interfered greatly with the attendance here, but all the locals turned out, and the takings were about £20. Mr. F. J. Lynch (Woburn, Denman), on behalf of the War Chest Committee, in a few appropriate words thanked the “Cheer-oh Girls” for coming to Denman to give the entertainment, and on behalf of the audience thanked and complimented them on their splendid programme. The “Critic’s” opinion of the show is as follows: Mrs. Bennett White, a “hit”; Miss Dorrie Ward, a “star”; Mrs. Victor Morse, “bird”; Miss Jack Neil, a “catch”; Miss Gertrude Edmonds a “hickl-hoy”; Miss Beatrice Edmonds a “yacka-hoola” and  Miss Edith Dickerson a “trick.” In fact they are a very good combination of artists.

Attached is some more information about the Cheer-oh Girls; it gives a good insight into World War I home front efforts. Our researcher was unable to find a definition of ‘hickl-hoy’ or ‘yacka-hoola’ but did find this illustration. Beatrice is in the middle of the back row and Gertrude on the right of the front row. 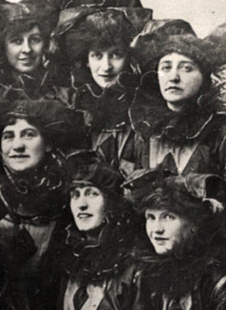 And here’s another photo, supplied by an Edmonds relative in 2022 and passed on by our researcher, Steve Flora. It is from Beatrice’s sister, Gertrude’s album, with Beatrice in the centre looking at the camera, Gertrude to the left and presumably Irene to the right. Taken at Cave Rock, somewhere in New South Wales, circa 1918-20. They are catching crabs. 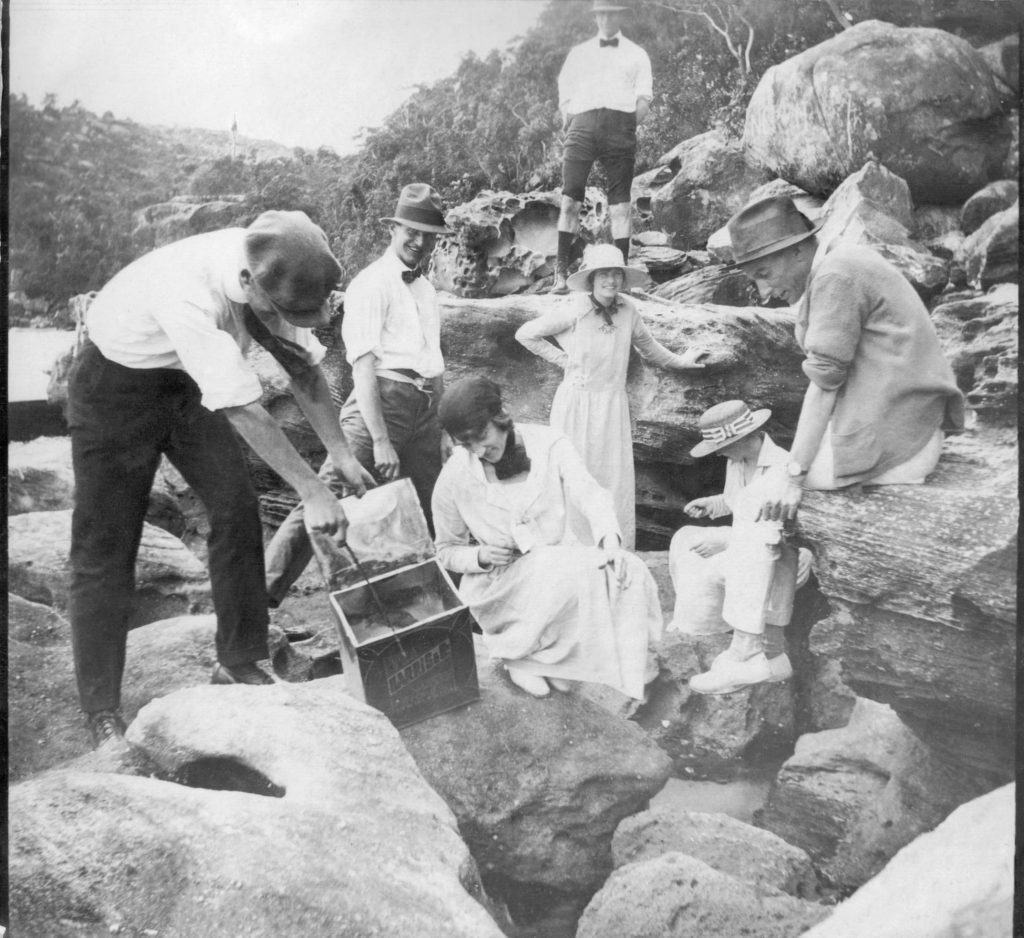 Beatrice married Samuel Trude Fripp (ex-RAF) in Sydney in late 1920 and went to live with him in England. In February 1933 she met Leslie Jauncey on a return voyage from Australia to England. It would seem there was an almost immediate attraction as, on 30 March 1933, Samuel Fripp submitted a petition in London to begin divorce proceedings. He cited Leslie as co-respondent noting ‘that from the 13th day of March 1933′ the couple had ‘co-habited together as man and wife’.

By June 1933 Leslie and Beatrice were travelling across the Atlantic to America, possibly to visit Eric Jauncey in St Louis, Missouri. The Fripps’ divorce became final on 15 January 1934 and the couple wasted no time advising King O’Malley by telegram that they were married in London on 17 January. By the end of 1934 they were again visiting Australia, the Edmonds family money presumably preventing economic circumstances hampering their lifestyle.

From 1940 to 1959 the Jaunceys lived first lived in San Diego, California, where they bought and managed an apartment complex (presumably again making use of Beatrice’s inheritance) later moving to San Jose, California. In both cities Leslie mentions in letters to King O’Malley and relatives that he and Beatrice were active with the Camp Fire Girls (similar to the Girl Guides), with Beatrice helping establish a 150 acre camp, costing some $80 000, near San Jose while serving for three years as president of the local group.

After Leslie’s death in 1959 Beatrice was by 1961 living again in England, though later she returned to her birthplace of New Zealand, where at the age of 96 she reminisced about her father Thomas for the Christchurch City Libraries publication.

Beatrice died in her 101st year in 1996 (see death notice below). Much of this information, as well as the material on Leslie, comes from ancestry.com.au, mundia.com.au, the Christchurch publication, and Jauncey family sources, all assiduously researched by our Steve Flora plus Steve’s diligent harassing of newspaper files, archives libraries and university records offices around the world. His work is a model of evidence-gathering. And here is a much sought-after photo of the adult Beatrice. 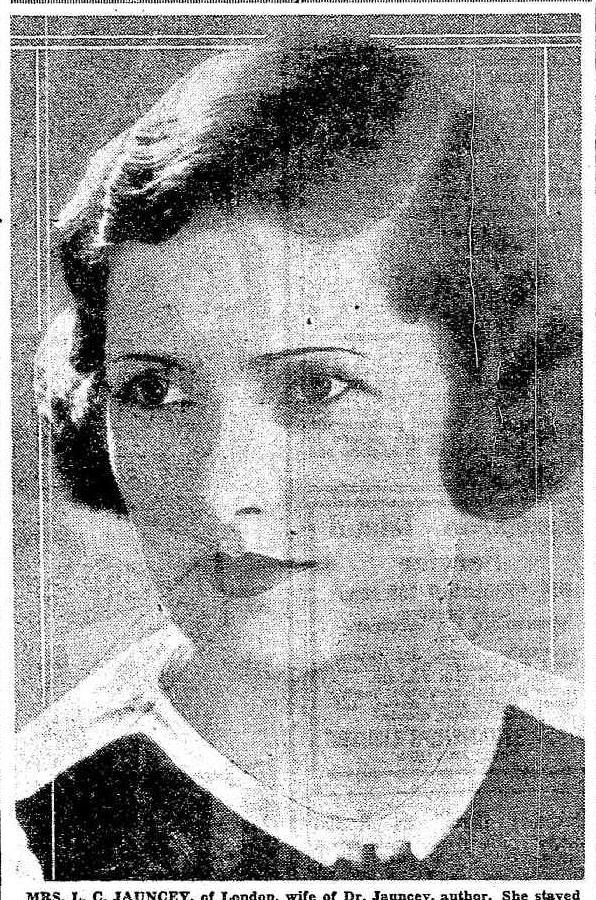 Mrs LC Jauncey, of London, wife of Dr. Jauncey, author. She stayed at the Hotel Richmond, Adelaide, while on her way home with her husband (source: NLA Trove; photo: News (Adelaide) 8 December 1934) 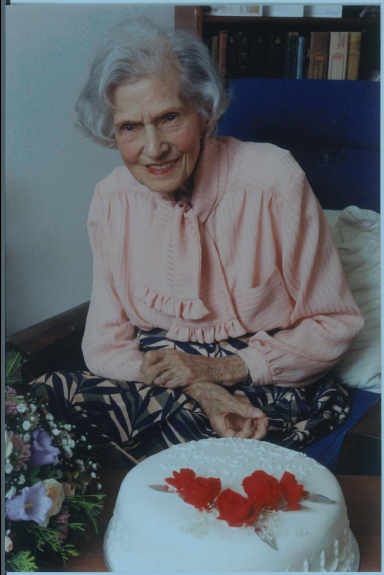 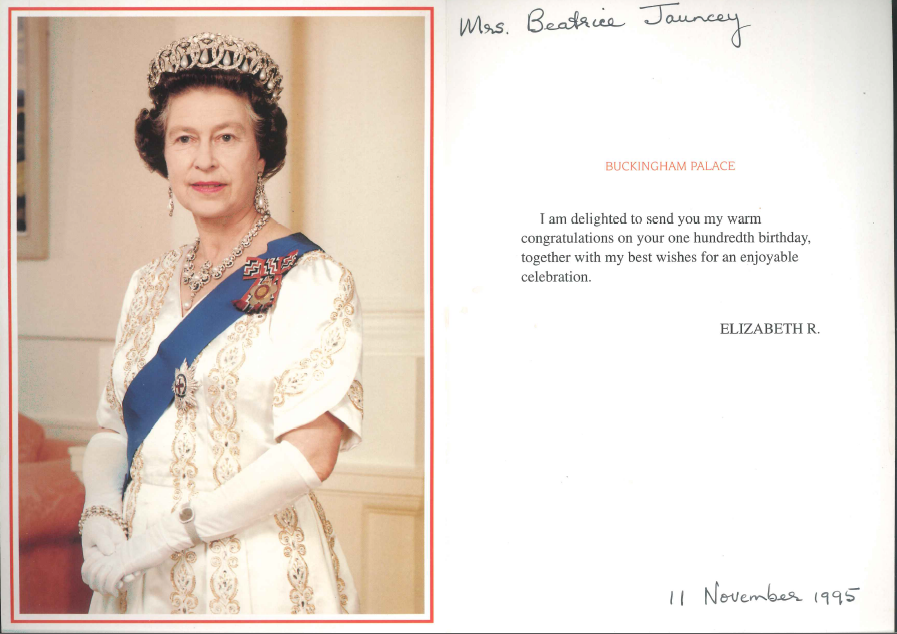 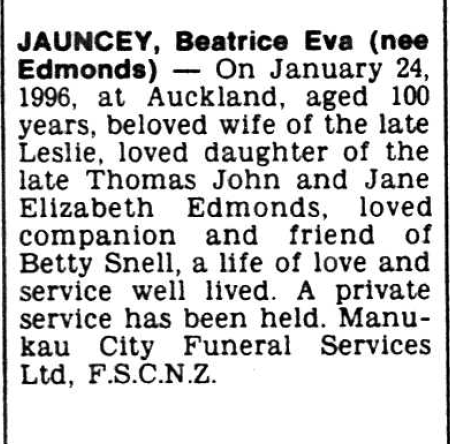 * Information from Edmonds family regarding the linked photo:

Joseph Edmonds married Dorcas? –no children in photo (adopted a boy about 1905).