Have your say with the National Capital Authority on the Memorial’s ‘early works’ application. You don’t need to live in Canberra. Arguments here.

‘The great War Memorial tree massacre: the price we will pay for the Edifice Complex’, Honest History, 26 March 2021

Heritage Guardians urges readers who find distasteful and abhorrent a project that requires the destruction of the trees in this story to say so as part of the National Capital Authority’s current consultation process. You have until 30 April. You don’t need to live in Canberra. There are some discussion points here that you might like to use.

The desire to leave a legacy in bricks and mortar seems ingrained in humans, particularly men, though it often turns out badly. The poet Shelley wrote about ‘Ozymandias’, where future generations found ‘two vast and trunkless legs of stone’ and ‘a shattered visage’, just a ‘colossal Wreck’ as testimony to someone’s great ambitions. The Indonesian dictator, Sukarno, was a great builder but, after he was defenestrated, his subjects laughed at the towering Djakarta monument known as ‘Sukarno’s Last Erection‘. The academic Deyan Sudjic has written about the Edifice Complex, how ‘architecture must be understood as an expression of power and propaganda rather than art’, whereby sometime powerful figures seek ‘to wield control and shape national identity’.

There is something of all of that in the story of the $498m extensions to the Australian War Memorial. Beneath all the emotive propaganda about needing to tell the stories of recent service – so the children of those who served can have something to see at the Memorial – there remains this vision of a future Memorial of massive new spaces, architectural grandiosity, boastful construction, and reinforcement of an Anzac legend, larger and purer than life and than the men and women who wore the nation’s uniform.

The War Memorial, we are told by its unquestioning advocates, speaks to us about ourselves. The new, bigger Memorial will shout at us: as the Memorial’s slogan once had it, ‘Every nation has its story; this is our story‘. Somewhere there, too, there will be a foundation stone bearing the names of the people, past and present, Directors and Council members, who presided over the project. For many of them, too, it will be their last erection.

We are just starting out on that journey to the new Ozymandias. But, as befits what we are told is a Memorial to sacrifice, there will be some casualties. And around 100 of them will be trees, most of them mature, many of them massive, 70 to 80 years old, that currently stand in the grounds of the Memorial.

‘Tree removal’ is one of the ‘early works’ included in the Memorial’s Works Application to the National Capital Authority (NCA). This document, submitted by the Memorial to the NCA, carries maps and tables, showing that 65 eucalyptus trees assessed in 2021 are ‘likely to be removed’, as well as an indeterminate number of trees assessed in 2019.

The rest of this post is simply pictures, pictures of the trees that will be massacred. (Pictures by Stewart Mitchell, former Director, Buildings and Services, at the Memorial.) Right at the end, though, is an image of the rebuilt front of the Memorial, as imagined by the Memorial’s architect, Scott Carver. It is quite misleading, unless it is meant to be dated c. 2050, for that is about the date when the view will look anything like that.

Heritage Guardians urges readers who find distasteful and abhorrent a project that requires the destruction of these trees to say so as part of the NCA’s current consultation process. You have until 30 April. There are some discussion points here that you might like to use.

The trees themselves have no voice. But the trees are symbolic of a disastrous project that should never have got this far and should go no further. 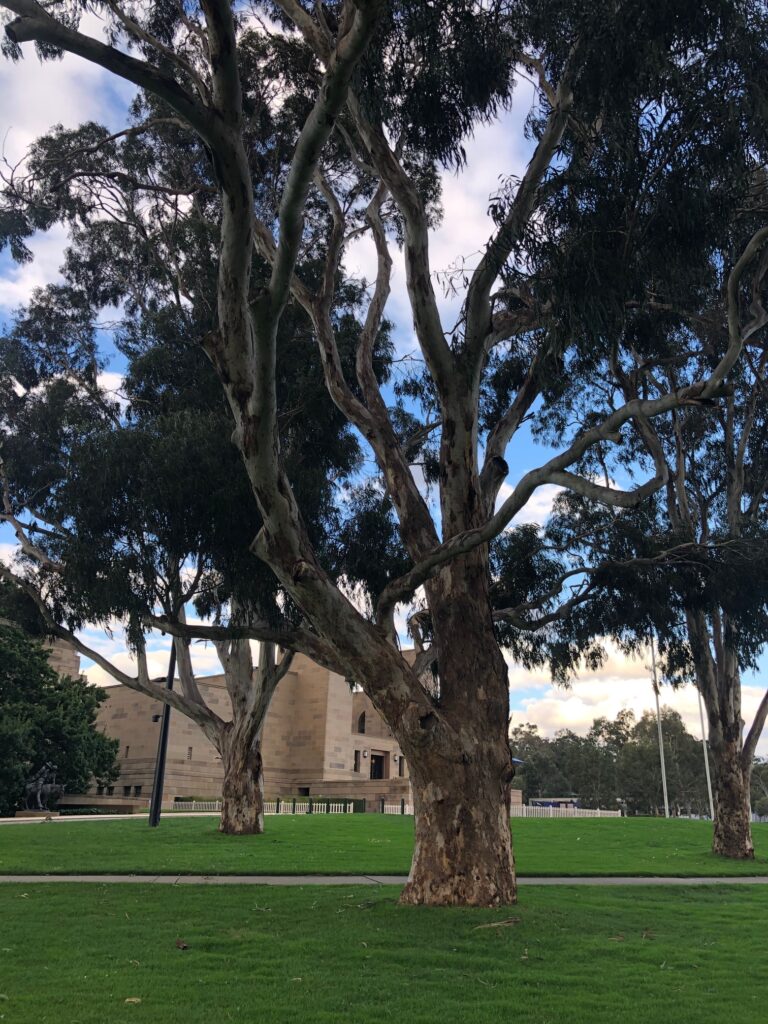 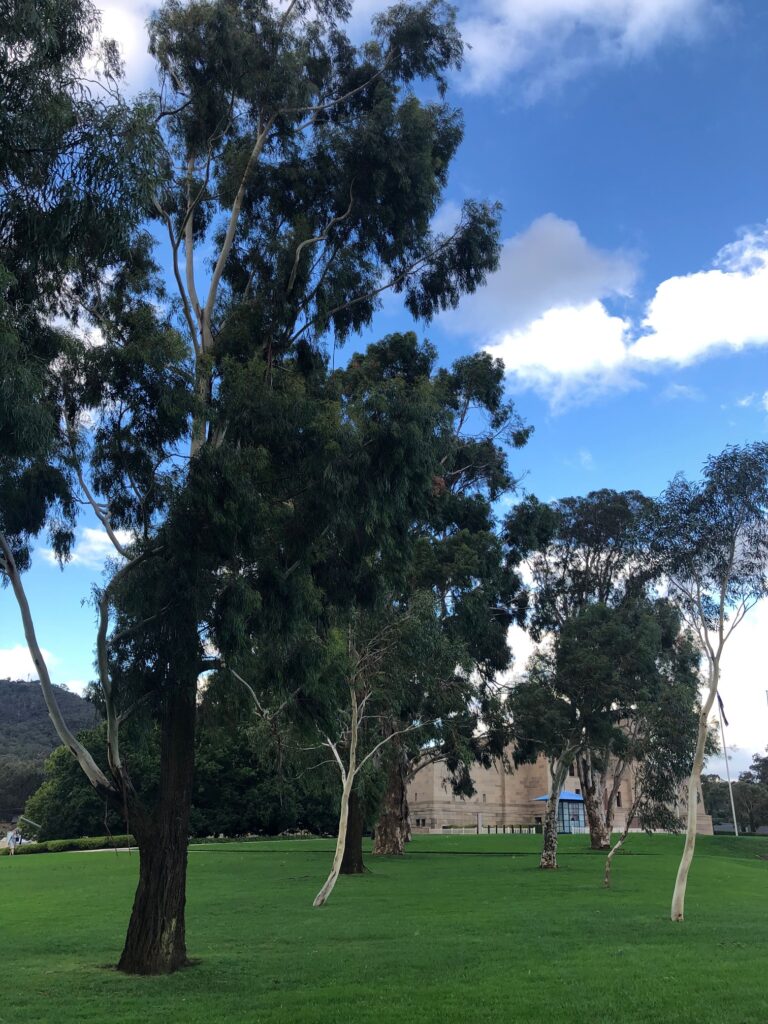 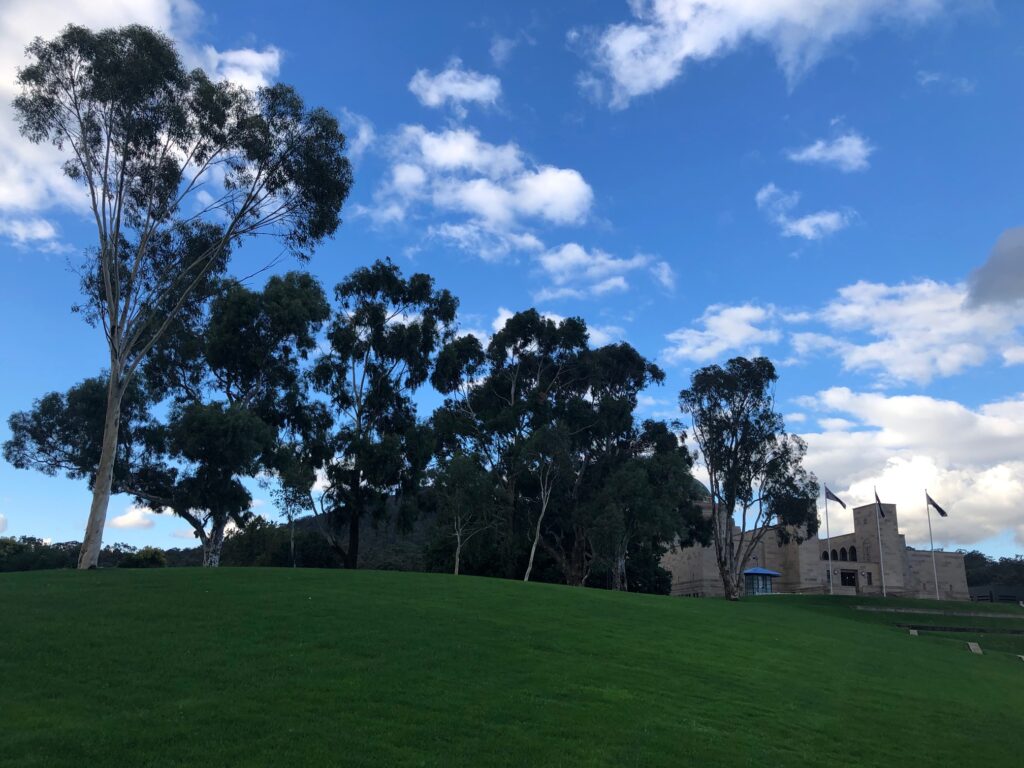 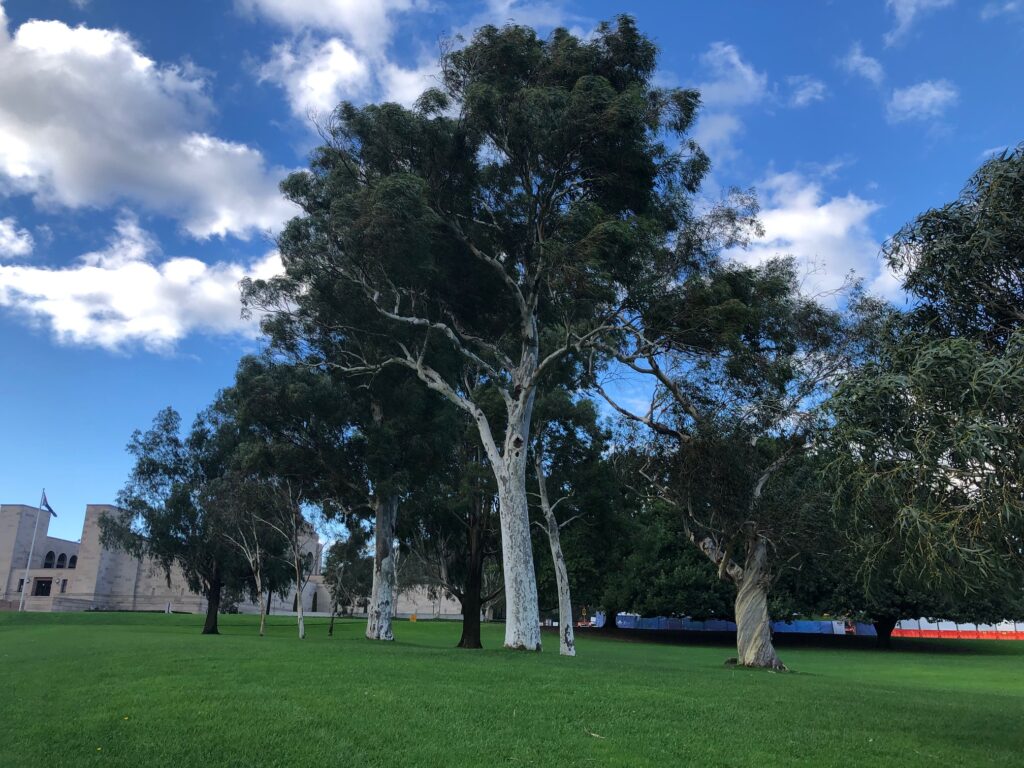 Eastern side of parade ground 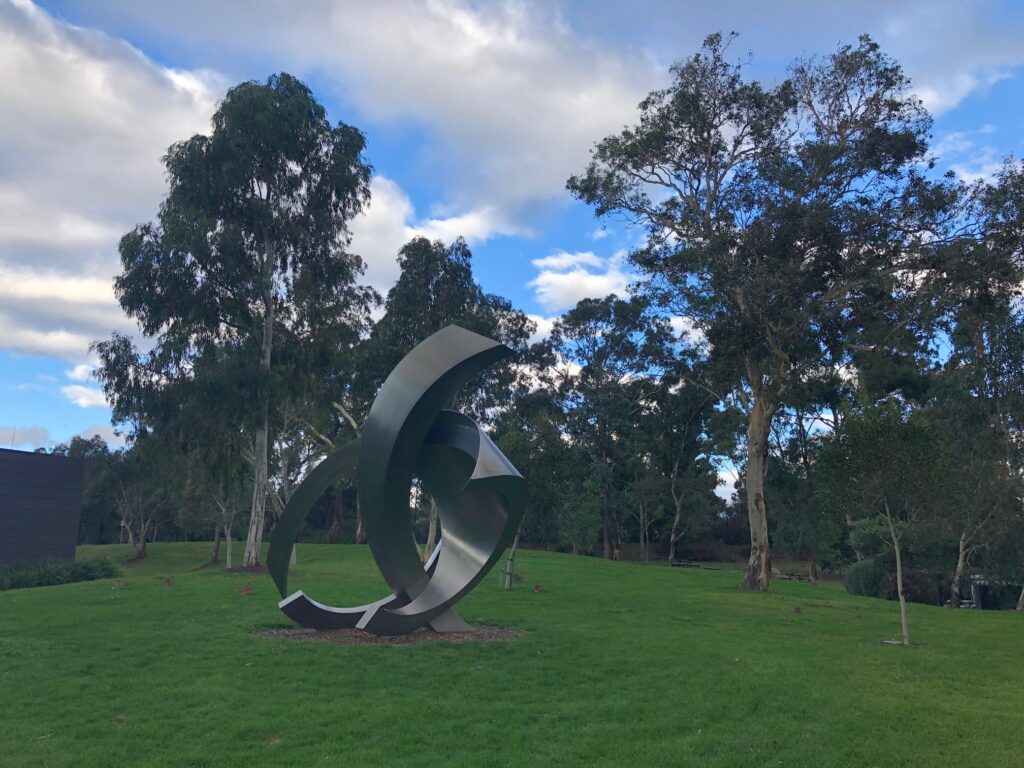 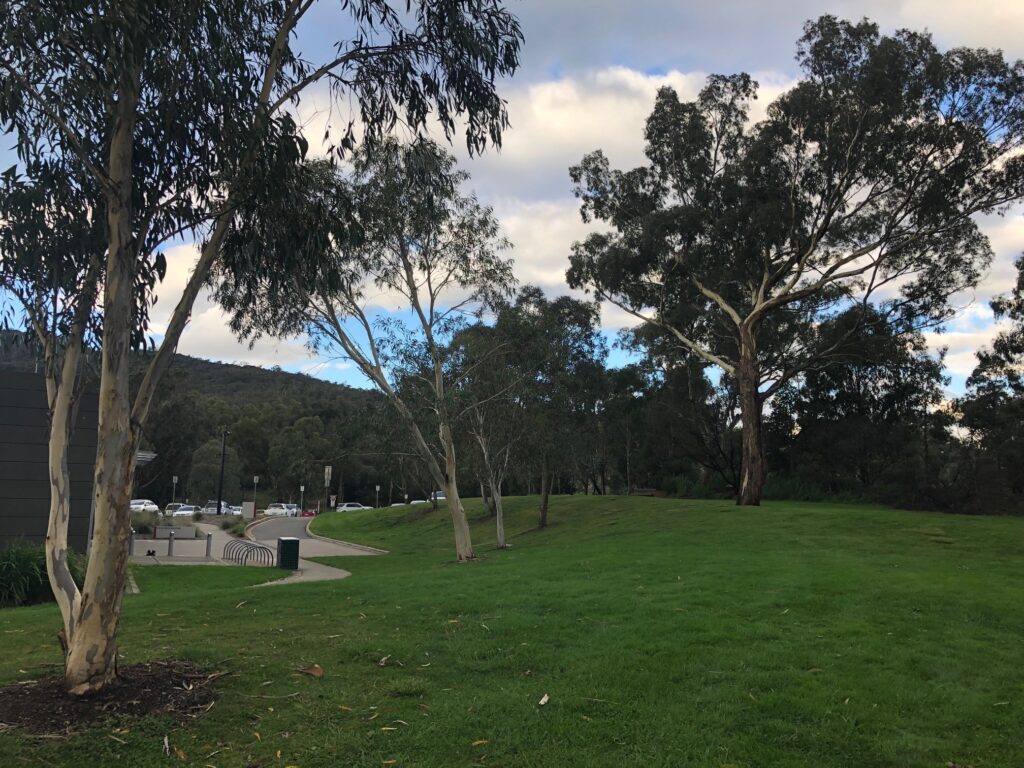 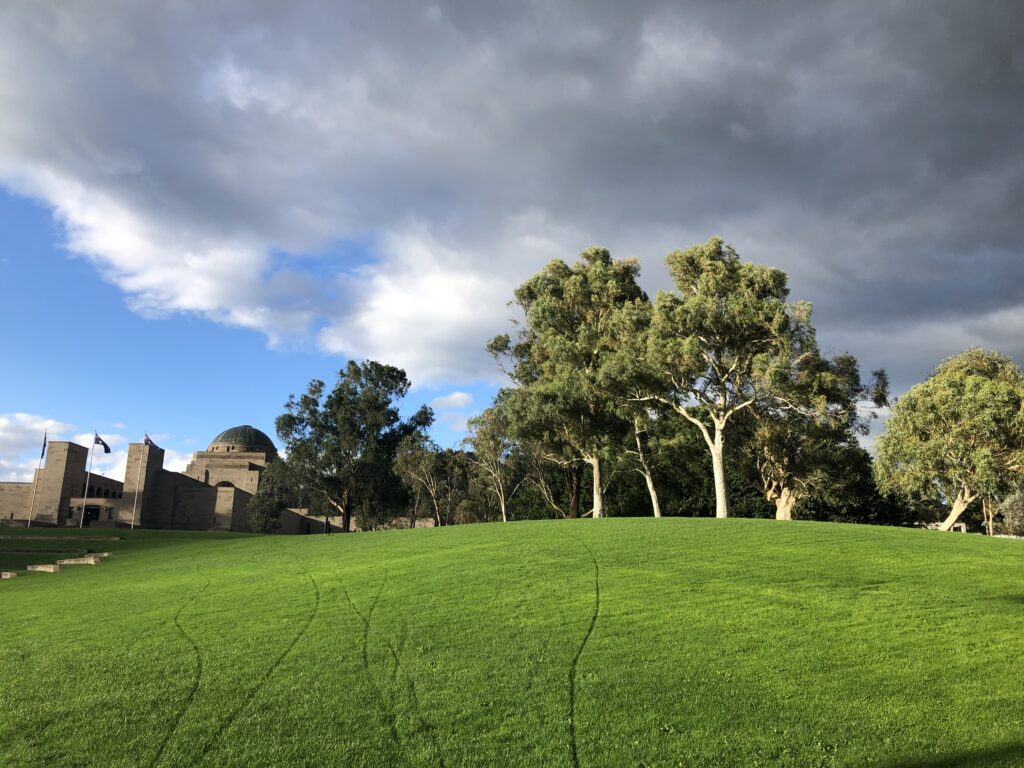 Going: all eucalyptus trees in front of the southern entrance and flanking the parade ground 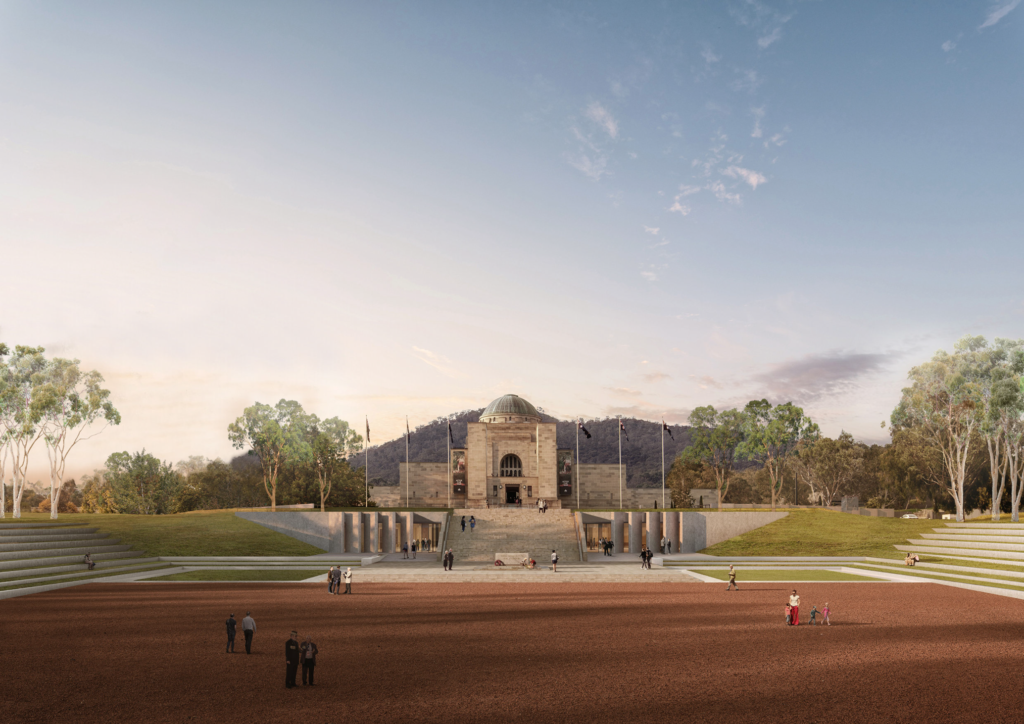 The idealised and misleading view of the new southern entrance, as imagined by architects Scott Carver for the Memorial (Attachment G5, Final Preliminary Documentation, September 2020)

* David Stephens is editor of the Honest History website and convener of the Heritage Guardians campaign against the War Memorial project.