Journalist Jauncey reports on FDR in power: Part I (4 November 2014)

Steve Flora has become close to the Jauncey family through his extensive research, drawing upon archives and libraries in Australia, New Zealand, the United Kingdom and the United States. Steve is of the Bowling Green, Kentucky, Floras so it is appropriate that he now writes about Leslie Jauncey’s journalism from the United States during the eventful 1930s.

Leslie Jauncey was an acute observer of his adopted home of the brave and land of the free. Early in his correspondence with King O’Malley, Jauncey regularly made observations regarding the current state of affairs in America. Then in 1938 he began to pen columns in much the same vein for the Sydney paper, the Labor Daily, the ‘official organ of the Australian Labor Party’, renamed the Daily News in December 1938.

Roosevelt has been re-elected here as I thought he would be, in spite of the charges made against him that he was a “red” and a spendthrift.  Conditions are so much better here that even the enemies of Roosevelt had to admit that things were not as bad as they were when Hoover gave up the ghost … I certainly am glad that Roosevelt was [re-]elected.  I think he is a great man … The size of the Roosevelt victory was such that even his supporters have been astounded! … Here in the United States the reactionaries are down but not out. One of the common statements made since the election is that after all “we Landonites did pile up 17 million votes” [Alf Landon was the Republican presidential candidate in 1936]. This, you will see, is the first step towards fascism. The next step will be that the 17 million are more important than the 27 million and should get together to see what they can do about it. First of all the big fellows over here are trying to flatter Roosevelt into supporting their ideas. If this fails, as seems likely, then I expect more desperate moves will occur. Anyway, the United States is an interesting country today and I am happy to be here at this time.[1]

Conditions in the United States seem definitely to be improving. Roosevelt is more popular today than ever before and seems a little less disposed to experiment than he was last term of office.  I think he now feels that recovery is on its way and that it would be well to leave alone. [2] 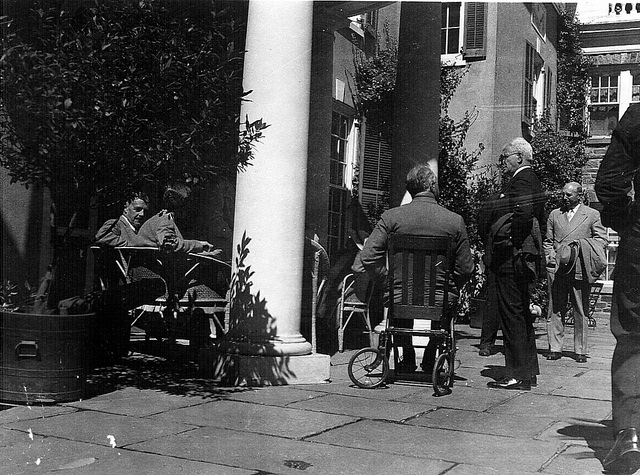 Roosevelt and friends, September 1937; one of the few photographs of FDR in his wheelchair (Flickr Commons/FDR Presidential Library and Museum)

By June, though, our correspondent was having second thoughts:

Roosevelt has lost his hold on Congress now because he was over-confident on his Court Bill [when FDR attempted to work around the obstructionism of a conservative-dominated Supreme Court by appointing a number of Progressive judges]. He let slip the opportunity to push the Bill through Congress and now seems to be faced with the first real opposition since he first came into power. He is still doing his best for labor and has not yet called the troops out to subdue the CIO [Congress of Industrial Organizations, i.e. peak body of labor unions], but nobody knows how long it will be, before the troops will be out to quell the strikers. I am sure Roosevelt does not want to suppress the workers, but there are strong forces in this country favoring such action. Yes, it looks now as though Roosevelt is beginning to lose the great popular support he has had for years.[3]

By January 1938, Jauncey is even more despondent:

Roosevelt is slipping now in popular esteem, although he is still very popular. It is not uncommon now to hear the audience give many hisses when he appears on the screen [Jauncey loved watching movies and newsreels]. The Republicans, unfortunately, do not have any programmes nor do they have any strong men to lead them.

There is quite a recession over here. About 3,000,000 people lost their jobs during November and December, making about 12,000,000 people out of work at the present time. The business men blame the government, and the government blames a few business men for the trouble. Of course, the recession is one of the phases of capitalism, and recessions and depressions will always continue at stated intervals so long as capitalism continues. Over in Russia there has been an increasing standard of living since 1927 without any recessions or depressions.[4]

After moving from Washington DC to New York City in August 1938, Jauncey writes again to O’Malley:

I have no desire to do anything but write and so I am just tickled to death about my work for the Labor Daily [the Sydney Labor newspaper]. You see my color will not permit me to write for any but an advanced paper, and I am happy that with Lang out I can write for the only Labor newspaper in Australia – that is the only Labor daily! It now has a circulation of 70,000 a day, and I feel that it is fine to reach so many people. It should soon reach 100,000, for the circulation is rising!

He adds in a handwritten note on the side of the typewritten letter: ‘P.S.  I shall be working for the Labor Daily at the above address until Oct 1st, 1939.’ He adds further in November 1938, ‘I am still writing for the “Labor Daily” in Sydney. I am a columnist now. I also send them feature articles, which they at times publish.’[5]