‘“The aeroplane is the nearest thing to animate life that man has created”: Ross Smith’s 1919 account of an epic flight’, Honest History, 11 July 2019

The next few years will see a series of significant centenaries for Australian aviation: Qantas was formed in November 1920, and the Royal Australian Air Force (RAAF) and the Civil Aviation Branch of the Department of Defence were created within days of each other the following March.

First, though, will be the centenary of the first flight from England to Australia, a journey now undertaken by hundreds of people every day. On 12 November 1919, four Australians took off in a twin-engined Vickers Vimy from Hounslow aerodrome in the west of London: a pilot, Ross Smith, a co-pilot and navigator, his brother Keith Smith, and two mechanics, James Bennett and Walter Shiers. Their destination was Darwin, via Lyon, Rome, Cairo, Baghdad, Karachi, Rangoon, Singapore, Surabaya, and many places in between; and they needed to reach it within 30 days in order to win a prize of £10 000 offered by the Australian government.

They made it with three days to spare, beating, or rather outlasting, their rivals, after spending a total of 135 hours 55 minutes in the air. It was a Herculean effort, at nearly 18 000 kilometres, then the longest distance flown by anyone, anywhere. When they arrived in Darwin on 10 December, they were mobbed by rapturous crowds, in scenes which were repeated when they flew – after a couple of months in Charleville for major repairs – to Sydney, Melbourne, and finally Adelaide.

Beyond South Australia, Michael Molkentin is bringing out a new biography of Ross Smith. Unfortunately, a proposed reenactment of the race, this time with electric aircraft, fell through because the governments en route were unable, or unwilling, to guarantee the safety of competitors.

Leading into all of this activity, Wakefield Press has published Flight to Fame: Victory in the 1919 Great Air Race, England to Australia, a new edition of Smith’s own account of the flight, originally published in 1922 as 14,000 Miles through the Air. The introduction by Peter Monteath, professor of history at Flinders University, efficiently sketches out the context of the Vimy flight for general readers, giving backgrounds of its crew and their competitors, and explaining the genesis of the race itself.

While the immediate political context of the flight is explained well, more might have been said about the tremendous enthusiasm in 1919 for aviation’s potential to span the world. That year, the Atlantic was not only overflown by another Vimy (as Monteath notes), but by the United States Navy (in seaplanes) and the Royal Air Force (in an airship, there and back), while another Australian, Harry Hawker, made the attempt but was dramatically rescued in mid-ocean.

The changes from the original edition of the book are appropriately minimal, largely consisting of explanatory footnotes by Monteath and a new set of illustrations. The latter are mostly taken from the State Library of South Australia’s collection of Keith Smith’s photographs taken en route, along with some by Frank Hurley, the war and Antarctic photographer, who flew on the Vimy’s last Australian legs. 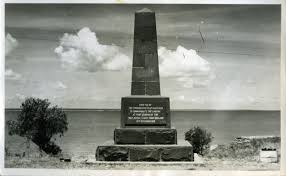 The pictures are well-chosen and clearly reproduced, giving a good sense of the aeroplane, its crew, and the conditions encountered along the way. My favourite (p. 48) is one of Bennett and Shiers ‘assessing’ one of the engines, cheekily posing in absurdly heroic style in their overalls, spanner in hand, a reminder that the mechanics were nearly as essential to the ultimate success of the flight as the pilots, given that facilities and supplies along the way would be strictly limited. Welcome retentions from the original edition (if awkwardly placed for constant reference) are a map and a timetable of the journey.

Smith’s narrative of the flight’s near-disasters and triumphant successes is, in parts, a remarkably vivid read. Chapter 2, for example, recounts the first and in some ways the most difficult stage of the flight, southbound over France. Here the Vimy encountered high winds and driving snow, with flying in an open cockpit in an untried machine. Unable to see the ground, Smith worried about ‘what would happen if we encountered a heavy side wind and got blown out into the wild Atlantic’ (p. 60).

The situation was becoming desperate. My limbs were so dead with cold that the machine was almost getting beyond my control. We must check our position and find out where we were at any cost (p. 60).

His description of what is now utterly familiar to the modern air traveller reminds us that for most of his readers this was still another, enchanting world.

The mighty cloud ocean over which we were scudding resembled a polar landscape covered with snow. The rounded cloud contours might have been the domes of snow-merged summits. It was hard to conceive that that amorphous expanse was not actual, solid … Everything was so tremendous, so vast, that one’s sense of proportion swayed uncontrolled (p. 58).

Even more surprising is his confession of communion with his machine.

The aeroplane is the nearest thing to animate life that man has created. In the air a machine ceases indeed to be a mere piece of mechanism; it becomes animate and is capable of not only primary guidance and control, but actually of expressing a pilot’s temperament (pp. 55-56).

These kinds of thoughts only occasionally resurface in the rest of the book, and it’s probably too much to think of Ross Smith as an Antipodean Saint-Exupéry. Unfortunately, he never got a chance to further explore his ideas: before 14,000 Miles through the Air even hit the shelves, Smith was killed while preparing for an even more audacious flight, to be the first to fly around the world.

The Vimy’s flight was a step towards conquering Blainey’s ‘tyranny of distance’. Though 28 days was hardly much faster than a voyage by steamship, and far less comfortable, the rapid development of aviation promised dramatic reductions in future. The race was not simply an optimistic expression of faith in technology, but also an expression of a newly brittle nationalism; not simply a desire to connect Australia to the outside world, but also a desire to control that contact. Japan had occupied German-owned islands in Micronesia during the war, stimulating racist fears in White Australia.

The prize won by Smith’s crew was offered, rather ungenerously, only to Australians. Even so, there was concern that somebody else – namely the French duo of Étienne Poulet and Jean Benoist – would claim the honours; prime minister Billy Hughes, fresh from making himself heard at the Paris Peace Conference, said that ‘the main thing was that an Australian should get here first’ (p. 16). 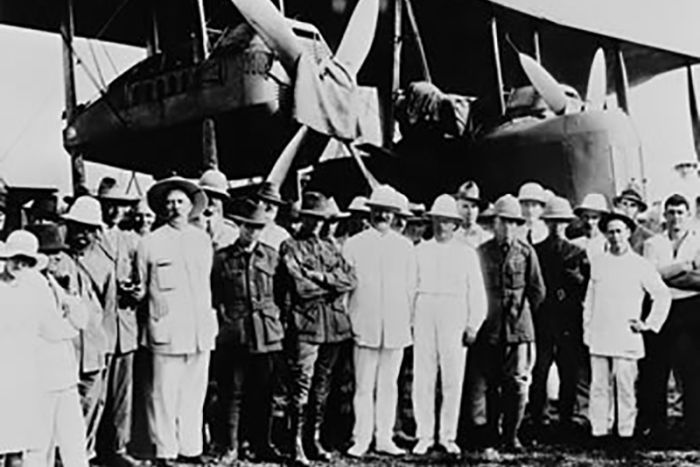 It was increasingly clear that aviation was vital for national defence. After all, a year previously the government had been almost powerless to do anything about (fortunately false) reports of enemy aircraft flying over the Australian countryside. The Vimy itself was born in war. It had not been designed to fly to Australia but to Berlin, to bomb it in reprisal for the German air raids on London in 1917.

Smith and his fellow aviators all learned their trade in the war, and indeed were still in uniform; Smith himself gained extensive combat experience in the Middle East, shooting down eleven enemy aircraft. Many of the string of aerodromes they landed at along the route had been built for the war against the Ottomans. Some were now being used to support British power in the vast areas of Asia and the Middle East under its control; after Italy the Australians were able to fly almost exclusively through British airspace, from Egypt through India, all the way to Singapore.

Over the Netherlands East Indies, the flyers had the enthusiastic assistance of the colonial Dutch administration, itself eager to promote aviation links to ‘home’. (In 1935, a KLM airliner came second in another race to Australia, beaten out only by a specially designed speedster.) Only in Persia (Iran) and Siam (Thailand), which already had its own military aviation corps, did they need the political cooperation of non-Europeans. Nearly everywhere, the Australian aviators could rely on the mobilisation of non-white labour to create landing grounds or pull the Vimy out of mud; at Singora in Siam, four ‘coolies’ powering a lathe went on strike for more pay, so ‘we called the foreman from the rice mill. There was a different kind of strike, and so the work proceeded’ (pp. 125-26).

A collision of empires created the Vimy; a collusion of empires made its flight possible. As Smith concluded, the Vimy and its crew, in turn, did ‘much to bind closer the outposts of the Empire through the trails of the skies’ (p. 158).

* Brett Holman is a Melbourne-based historian, whose research interests primarily revolve around the place of aviation in British society and culture in the first half of the 20th century. He runs the website Airminded and is a partner investigator on the ARC Linkage Project LP160101232, ‘Heritage of the air: how aviation transformed Australia’. His book, The Next War in the Air: Britain’s Fear of the Bomber, 1908-1941, was published by Ashgate in 2014 (hardback) and Routledge in 2017 (paperback).