‘“Trying to be something they’re not”: grandfathers, Diggers, and Peter FitzSimons’, Honest History, 10 November 2017

As a 61-year-old avid reader of Australian military history, all too often these days I find inaccuracies, mistruths and even lies about Australia’s military involvement or achievement. 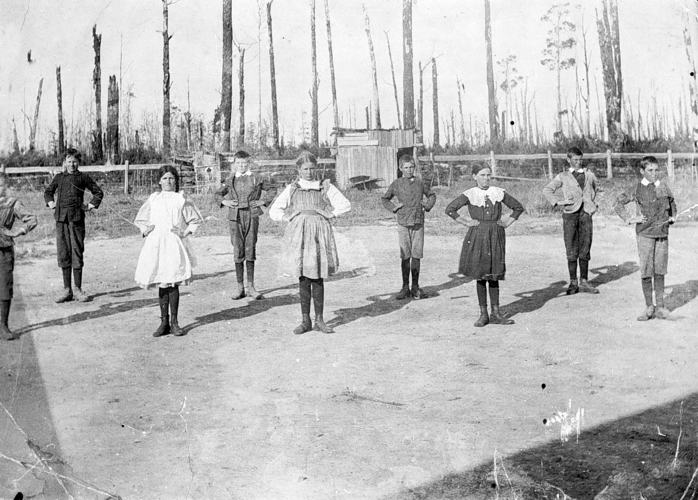 However, I can well understand how difficult it must be to remain unbiased, let alone accurate, about events that happened over 100 years ago. And, having worked as an advertising copywriter-creative director for over 35 years, in Australia and throughout the world, I know well how research can be used like a lamp-post: it should be used to illuminate, but all too often it’s used to lean against.

However, when it comes to writing history, one must refrain from embellishments, let alone mistruths. Otherwise, what’s the point?

Where am I going with this? Well, my grandfather, Archibald Glover, fought with the 58th Battalion 1st AIF (Pompey Elliott‘s 15th Brigade). Like so many others at Fromelles, he was seriously wounded, and lay in No Man’s Land for over 24 hours.

Any Australian military historian will tell you that battle at Fromelles was an absolute disaster. And, never before or since, have there been so many Australian casualties in one 24 hour period.

My grandfather was lucky to have survived those battles and he was ‘de-mobbed’, returning to Australia in 1919. As a small boy, I would sit on his lap as he recounted his ‘less frightening’ war stories, the only ones that my grandmother would let him tell a youngster. Later, until his death in 1975, and me being a teenager or a young man by then, I was enthralled to hear his ‘more frightening’ war reminiscences.

It was at that early age – and, of course, encouraged by my grandfather’s ability to capture my imagination – I became interested in Australian military history: World War I, World War II, Korea, the Malayan Emergency, Vietnam.

I’m retired now and live on 15 acres of bush in central Victoria, not far from Leongatha where my grandfather lived, before he went to Melbourne in early 1916 to join up with a few of his mates, the ‘Leongatha Boys’. (There is a photo of them at the Leongatha RSL and you can see it below also.)

I well remember my grandfather saying to me that he and his mates joined up once they’d heard back in Australia about the bad news at Gallipoli. Like many of his age at that time, they all had just wanted to ‘do their bit’.

My grandfather also said to me that he, his mates and the Australian reinforcements who joined up after Gallipoli, always viewed those Gallipoli boys as ‘the originals’, and called them that – ‘the originals’.

Peter’s latest book – the one and only book of his I will ever read – Victory at Villers-Bretonneux: Why a French Town Will Never Forget the Anzacs, is a perfect example. To be clear, this book was given to me by a friend who, knowing I read Australian military history, thought I would like it. As a gesture to my friend, I read it, and did so with no prejudice at all. Prior to reading it, I thought Peter FitzSimons was just a sporting commentator. So, I was interested to see if he was good at anything else.

Well, after reading Peter’s latest book, I now realise he stretches the truth at best, and tells out and out porkies at worst. In fact, his writing is what I would call a patriotic homily. 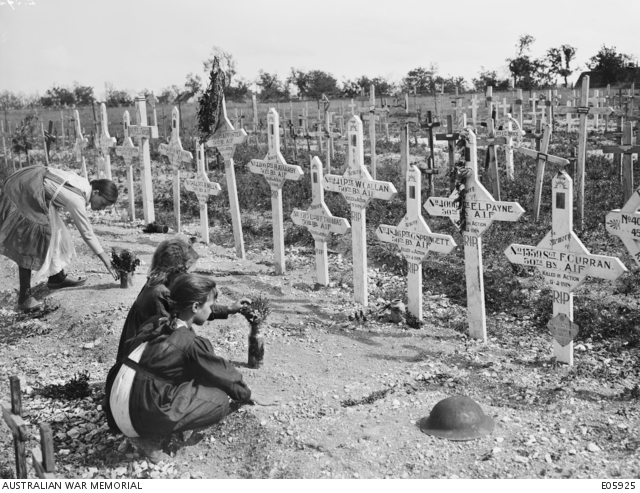 But, in a strange way, I’m glad I read the book. It’s made me acutely aware of what Peter FitzSimons and his ilk are all about. Between you and me, I think Peter FitzSimons is dangerous to the Australian ethos.

Like any ‘interested Australian’, and given my grandfather’s involvement in the battle, I have visited Villers-Bretonneux. I know only too well that, throughout that French town, the school, the general store, and just about everywhere else, the Australians of the 1st AIF are well loved, and well remembered.

But almost nowhere in that town will you find the word, Anzac. (It certainly wasn’t there when I visited in 1985.)

And nor should you.

Why? Because the Anzacs, ‘the originals’, never fought there!

I’m sure there would have been ‘originals’ in that Villers-Bretonneux battle, but never as members of the Australian and New Zealand Army Corps.

And there certainly weren’t any independent New Zealand units fighting at Villers-Bretonneux either.

Peter FitzSimons even acknowledges this fact. Nowhere in his Villers-Bretonneux book does he mention the Anzac Corps, New Zealanders or the ‘originals’. But he obviously felt he could get away with it on his jingoistic front cover! (Surely that sub-title wasn’t just an idea from his editor or publisher!)

I think writers like Peter FitzSimons are just trying to hijack, for Australia and/or for their own sense of ‘historical’ literary importance, the word ‘Anzac’.

Australians as a whole – all of us – and certainly not writers like Peter FitzSimons, own the word Anzac.

It is a word owned by Australia and New Zealand. And rightly so.

If my grandfather were alive today, he would be horrified to read the title of Peter FitzSimons’ book. So would his mates. And so too would every New Zealander who ever fought at Gallipoli with the Australian and New Zealand Army Corps.

Poetic license? I think not.

What I do think is: Peter FitzSimons is all about wanting to own Australian history (Mawson, Tobruk, Nancy Wake, Batavia, Gallipoli, Eureka, Ned Kelly, Fromelles-Pozieres, Kingsford-Smith, Les Darcy, etc) and I think it’s high time he needs to be shown for what he is. 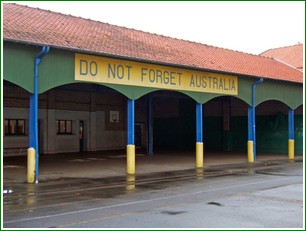 As a story teller. Not a historian![1]

(I can’t help but wonder if his book called A Simpler Time, about his family history, is full of mistruths as well. But unlike him, I wouldn’t presume to know)

I won’t bore you with my thoughts about his ‘making stuff up in between the lines’ literary approach, or his ‘ocker’ syntax. But to me, his over-paid literary endeavours are destructive, misleading and jingoistic.

I have tried and tried to get in touch with Peter FitzSimons. I have written to his editor. I have even tried writing to him through the Sydney Morning Herald. But no response.

I don’t do any social media. Nor do I see the point at my age in doing so. So, Twittering, Facebooking or Instagramming are not options. They may be OK for a retired rugby player, but not for a retired adman.

So my only port of call is through this worthy Honest History website.

I’m not sure if the reader is as disgusted as I am with Peter’s attempt at rewriting history. But I would ask the reader to think upon this: once these mistruths are allowed to go unchallenged, they will become the truth – or so future generations will see them. And, to me, that would be tragic!

At my age, and with my extensive, yet humble Australian military knowledge, I owe it to my grandfather, to his mates, and to ‘the originals’ (both Australian and New Zealanders) to call the likes of Peter FitzSimons, et al, for what they are.

Trying to be something they’re not.

* As the article says, Jeff Glover is a retired advertising man and military history enthusiast. He lives in rural Victoria.

[1] Peter FitzSimons prefers to call himself a ‘storian. Honest History’s David Stephens once offered him some advice on how to become a historian, as well. Shortly after this piece appeared, Mr FitzSimons blocked Dr Stephens on Twitter. The Honest History site contains a number of reviews of and comments on Mr FitzSimons’ work. Use our Search engine, with the search term ‘FitzSimons’. (HH) 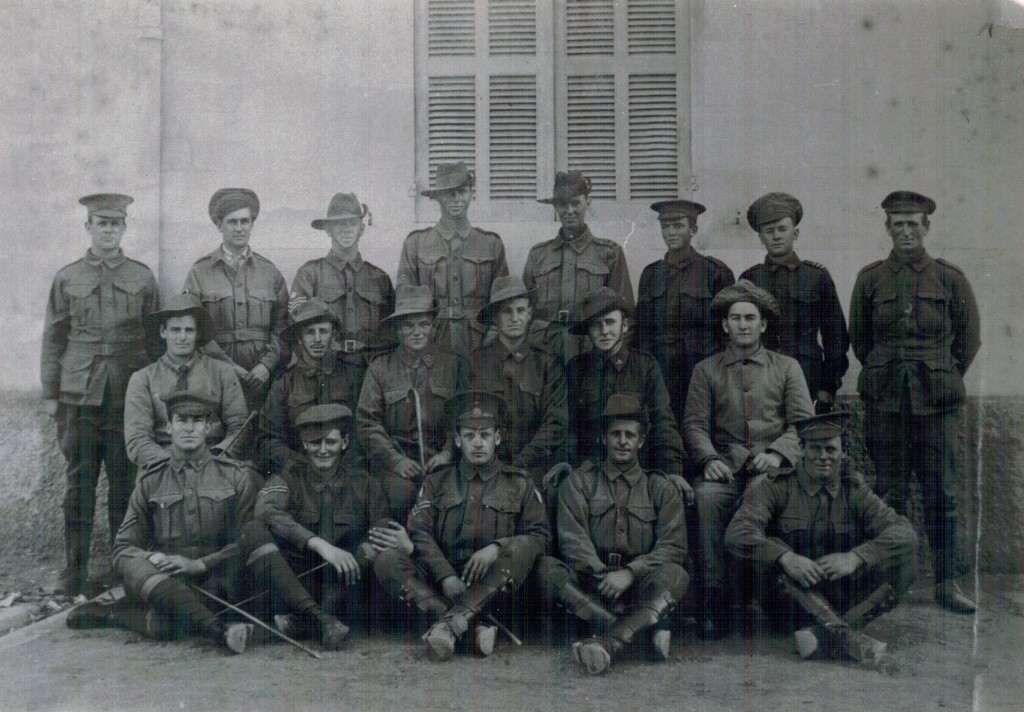 The ‘Leongatha Boys’ who all travelled down to Melbourne to enlist. My grandfather (19 yrs) is seated bottom left. Next to my grandfather, with a jaunty angle to his hat, is his best mate, Alan Russell of the 57th Battalion AIF, who died at Fromelles. My father is named after him, and Alan is also my middle name. The photo was taken in Egypt, when they all met up again, after finally being assigned to different battalions within the 15th Brigade, and days before they were shipped out to France. Six weeks later they all were in action at Fromelles. Of the 19 boys in the photograph, only 11 returned after the war. (JG)