Channel 9’s mini-series Gallipoli is trumpeted as telling us ‘THE TRUTH!’ As it is apparently based on Les Carlyon’s idiosyncratic 2001 book Gallipoli the claim is at least debatable. Written by Christopher Lee (whose credits include the mini-series Paper Giants and Howzat!) and directed by relative novice Glendyn Ivin (who directed the telemovie Beaconsfield and episodes of the series Puberty Blues) this Gallipoli is, as Punch used to say, a curate’s egg: good in parts.

Gallipoli certainly deserves plaudits for portraying war honestly. In the drama’s opening minutes, the hero, Tolly, a 17-year-old (of which more presently) bayonets an Ottoman soldier who is attempting to surrender. Blood, cries and sudden violent death abound: the episode does not shirk depicting the horror of combat and for that the production team deserves credit. Likewise for depicting the ‘straggling’ that Charles Bean witnessed – men overcome by the shock of battle simply wandering off to congest the beach. And so far we have been shown no Hollywood heroics. 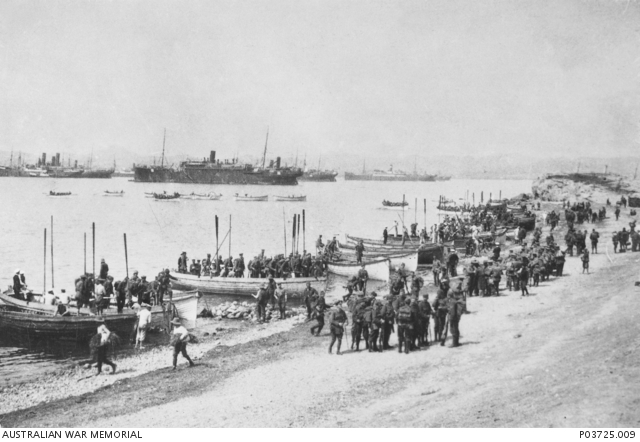 Though the lacklustre to-ing and fro-ing on the hillsides soon becomes rather tedious, the episode imagines quite well the experience of the campaign’s first day, with men wondering what to do, officers unsure of exactly where they are and sudden clashes – usually at rifle range in actuality – with groups of Ottoman soldiers. This is all to the good, even if the experience of just one group of men of the 4th Battalion strains to stand for that of the first day as a whole. (This is odd, because the 4th Battalion gets only one passing reference in Carlyon’s book, and it was in the third wave to land, not the first, but presumably the producers needed a battalion that fought at Lone Pine: hence the somewhat fudged opening scene of a landing in darkness. As the production is supported by Film Victoria it is curious that the producers did not choose to depict the Victorian 2nd Brigade.)

Sadly, other aspects of episode 1 are less satisfying or justifiable. The glaring flaw at the heart of the production is that Tolly is supposed to be just 17. (Is this a magic number? The son of Russell Crowe’s character in The Water Diviner died at Lone Pine, also at 17.) In fact, the average age on enlistment in the Australian Imperial Force in 1914 was almost exactly 25. A few well-developed under-age volunteers were accepted by medical officers, but Tolly looks like a teenager – his uniform doesn’t even fit. Why, in a force that in 1914 took only grown men who were the tallest, strongest and fittest, a poorly-developed boy was accepted is unexplained, inexplicable and in fact unjustifiable. Why could Tolly and Bevan not have been, say, 19 and 22?

The answer is probably that the moody-but-handsome Kodi Smit-McPhee (himself about 17 at the time of filming) needed to be cast in the lead role. Perhaps though there is a somewhat sinister attempt to draw in a younger demographic, a disturbing feature also of Anzac commemoration. It just seems hackneyed that the production is also built upon the all-too-familiar Hollywood trope of a complex relationship between brothers (Tolly’s elder brother Bevan serves alongside him) with hints of competition for the affection of an unnamed young woman. 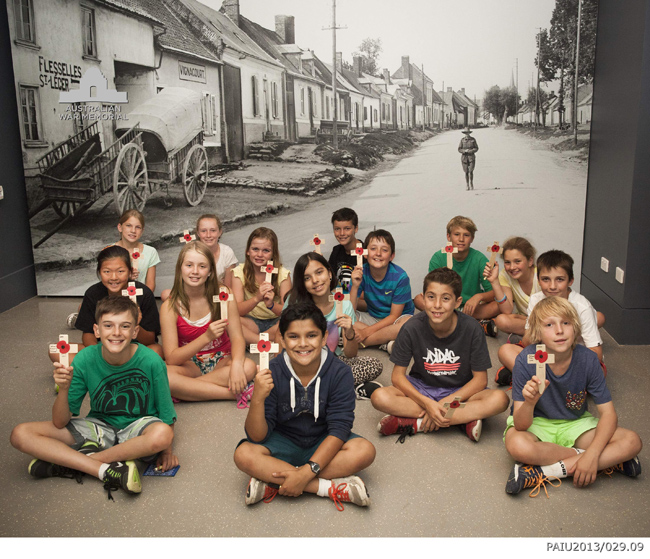 ‘A younger demographic’. Commemorative Cross Project. School children from Hartwell Primary School, Victoria, visiting the Australian War Memorial write messages on crosses that will then be placed in cemeteries and on memorials of Australian servicemen and women worldwide. (AWM PAIU2013/029.09) Other relevant material.

The drama itself is curiously bifurcated. One storyline follows the fictional Tolly and Bevan, their family and their mates – all made-up characters, as are ‘Sergeant Perceval’ and ‘Captain Taylor’. The sergeant and the captain are merely ciphers to represent the failure of the landing, held on the ridges above Anzac Cove by Ottoman reinforcements more swiftly assembled and more aggressively led than the invaders had expected.

The other storyline sees the historical generals act out Gallipoli’s traditional stations of the cross – Over-Confidence before the Landing; the Australian Brigadier-Generals’ Growing Doubts; the Argument about Withdrawing and the Dig, Dig, Dig Order. Historically, this aspect of the drama is weakest, partly because all the generals look alike – red-banded hat, moustache, red tabs, medals – and none of them are named. I had trouble keeping track of which general was which. Perhaps the writers dropped Ewen Sinclair-Maclagan to ensure that they had only one Scot (Bridges, suitably bullish but more corpulent than the prototype).

Sinclair-Maclagan may also have been dropped because he bore most responsibility for derailing the landing, though his being nominally an Australian fits ill with the Carlyon thesis. In Carlyon’s book Sinclair-Maclagan gets only four mentions and none of the blame. But it was Sinclair-Maclagan who persuaded his fellow Australian brigade commanders to not push on and therefore condemned the Anzac force to be hemmed into an untenable perimeter on the first day, from which the invaders never broke free. As an explanation for the invasion’s failure this Gallipoli is a dud.

Carlyon tips his nationalist hand and Lee and Ivin have dutifully followed, over-awed, perhaps by the supposed stature of Carlyon as historical story-teller. For the villains of Gallipoli the mini-series, like Gallipoli the book, are those dastardly, arrogant British generals, and especially the dilettante poetry-quoting Ian Hamilton, abetted by his sycophantic chief-of-staff Braithwaite and ineffectual subordinates. To those familiar with the originals the historical treatment is unsatisfying. Godley (commanding the New Zealand and Australian Division) is uncharacteristically genial but Birdwood’s appealing personality is absent. Hamilton, arguably the brightest general of his generation, let down only by his over-developed loyalty towards Kitchener, comes across as a silly old buffer. He was just 62 (er, six years younger than the writer, Lee), hardly superannuated. He should have been played as Lear, not the Fool. 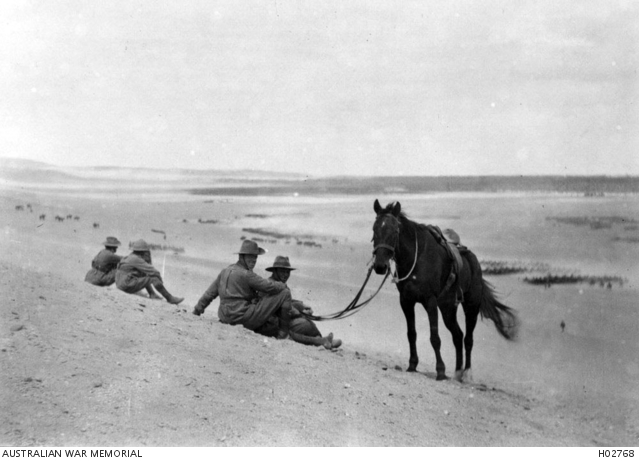 Besotted as Carlyon was by the Atatürk legend (Carlyon bears the blame for propagating the Australian acceptance of the Kemalist interpretation of Gallipoli) the historical Mustafa Kemal naturally makes an appearance. He mouths (in Turkish) the famous line, ‘I do not order you to fight; I order you to die!’ (As I have observed, if a British general had said this he would be accused of being a butcher or a bungler, or both, but Australians now adore Atatürk as much as – or, with the rise in Turkey of an Islamist reinterpretation of Gallipoli, perhaps more than – the Turks do.) A curiosity of this production is that none of the historical characters are introduced except in dialogue, so Kemal is, to those not in the know, just Some Turkish Officer Dude. Charles Bean also makes an appearance on the beach; presumably his moment will come in later episodes.

For much of the first episode the jumping from the real figures at headquarters to the fictional characters on the peninsula (or at home in flash-backs) occurs side-by-side, the two streams hardly impinging upon each other. In the final scenes the crux of the drama becomes clear, however. Hamilton and Braithwaite take a whiskey night-cap after a sumptuous dinner in scarlet mess-kit aboard HMS Queen Elizabeth. (This is in a ward-room that looks more like the private dining room of a good hotel: in fact wooden fittings were removed from warships for fear of them burning in battle.) Hamilton is reassured by his toady staff that all will be well and he retires in silk pyjamas. (Did they wear mess-dress that night? I’d like to see the evidence. I doubt it.) Meanwhile (and this is the point) poor traumatised Tolly lies out on the hillside ashore, covering his head against the rain. Those bastard English generals, we are supposed to think: they have ordered our boys (literally boys) to die and, unlike Atatürk, not in a good way.

This might be described as honest history but it is honestly mistaken: adapting Carlyon inclines the writer and director toward an interpretation that advances an Australian nationalist and anti-British (but also pro-Turkish) agenda. Could this have been retrieved by more discerning historical advice? The publicity surrounding the series claims that Christopher Lee had ready recourse to the Australian War Memorial (which advertised during commercial breaks during transmission). What this means is also debatable. Since the Memorial’s entire collection is already freely available (despite the usurious reproduction fees it charges) this can surely mean that the production team had access (gratis or for a fee?) to the expertise of the Memorial’s staff. This ensures that the uniforms are pretty much right (except for the weird brown knee-boots worn by Australian officers, rather than the leggings familiar from photographs and, indeed, the Memorial’s own collection).

The script, partly based on Carlyon’s unwieldy book, struggles to convey the complexity of the reality. It is mostly unexceptional, though as usual these days script writers and editors have a cloth ear for military and period dialogue. Christopher Lee thinks that Australians in 1915 used the modern American phrase ‘we’re way forward’ rather than the contemporary British ‘we’re far ahead’; no one picked that up. Nor did anyone point out that in British armies subordinates address their superiors as ‘sir’, not ‘general’ – another Americanism. The line ‘utilise whatever communications we have’ is just awful. Curiously, actors were twice allowed to say ‘Euralus’ (supposedly the name of the British cruiser) rather than Euryalus (that’s ‘U-re-a-lus’); did the experts miss that or did the actors and director muck it up unsupervised on the set?

Given the mawkish, jingoistic slogan the Memorial has adopted for the Great War centenary – ‘Their Story, Our Pride’ – and particularly Carlyon’s standing within the institution (he is back on the Memorial’s Council after a break) Gallipoli’s tone could hardly be otherwise. For the time being, the Memorial as an institution exists to extol rather than enquire into Australia’s experience of war. It endorses not just the details Lee and Ivin got right, but also the debatable interpretations that suffuse their production. So much for episode 1. Six episodes remain. It’s going to be a long campaign.

* Professor Peter Stanley of UNSW Canberra is the author of 26 books, including several books dealing with the Gallipoli campaign, notably Lost Boys of Anzac, which deals with men killed on 25 April 1915. He has been associated with a number of television productions on war themes. His next book (and associated website) will deal, for the first time, with Indians on Gallipoli. He is the President of Honest History.