From the Honest History archives: Do teachers have patriotic obligations?

As Honest History closes in on our 2000th post, we have found value in – and an interest from readers in – re-running some of our earlier posts. Recently, we recycled ‘Tangled up in red, white and blue‘, which made the case for the many-strandedness of Australian history in the face of Anzackery. Around Anzac Day, we ran a collection of Anzac-related pieces.

Today, we are presenting again a speech that Honest History President, Peter Stanley, made to a conference of history teachers two years ago, in which he asked whether teachers have patriotic obligations. Professor Stanley talked about the effects of the two world wars on Australia, the nature of commemoration, debates about the nature and significance of the Anzac legend, and the changing nature of Australia’s relations with other countries following each war.

Among the points made in the talk:

[In looking at the stages of the teaching of Australian history in schools, it was possible to see] the future, where, if we’re not very careful, we will see war history in schools used as a vehicle for explicit, compulsory commemoration, in which we are no longer able to look critically at Anzac, because to do so will be regarded as “inappropriate” or “unpatriotic”. I fear that unless you [teachers] are vigilant this will happen …

Does it [officially-produced military history material for children] devote attention to opposition to war, to the reality of war, to the effects of war (as opposed to the conduct of war, to heroes and to victories?) I think not. The nature of that material – overwhelmingly dealing with men in uniform, often dead heroes, and soaked with the idea of respectful commemoration and received interpretations – is to incline you not to look critically at the place of war in Australian history. 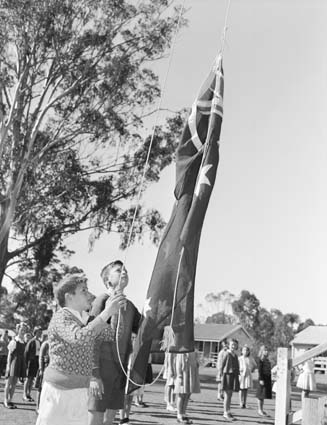 Professor Stanley answered the question he posed in the title of his speech:

I do not think that educators have patriotic obligations. On the contrary, I would argue that history teachers’ loyalties (in the classroom) should be to the practice of history with integrity and to their pupils’ developing of critical understanding, rather than to communicating or instilling a particular point of view.