We continue our presentation of these fascinating insights into expatriate missionary life in the Ottoman Empire of 1915. Previous editions: 28 April, 5 May 1915.

Our colleague, Vicken Babkenian, who has sourced this material, says

these issues were published during a time of strict censorship in Turkey. The American missionaries were warned by Turkish authorities not to report on local conditions and correspondence in English was forbidden throughout the empire. Correspondence between Istanbul and the outside world was allowed.

In this issue: reports on the fighting on the Western and Russian fronts; detailed report of the sinking of the Lusitania; translations of official and semi-official Turkish reports of the fighting at the Dardanelles, particularly around Ari Burnu (later Anzac Cove) up to 10 May. 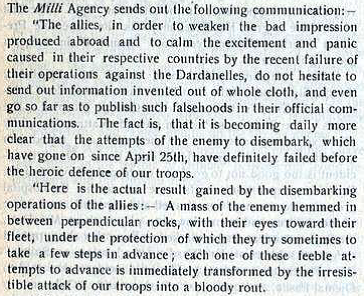