This year, 2015, as surely everyone knows now, is one hundred years since the Gallipoli landing/invasion, 25 April 1915, popularised as ‘Anzac’. But when was the first Anzac Day? Views differ. The illustration at the top of the Honest History Facebook page is of a parade in Brisbane on 25 April 1916 (complete with banner entreating ‘Enlist Now’ – there has always been a recruitment angle to Anzac Day).

This famous photograph is held by the National Archives of Australia and is captioned ‘Anzac Day, Brisbane, 1916’. John Moses and George F. Davis are among many who have written of a Brisbane-birthed Anzac Day, citing the work of Canon David Garland in promoting the concept nationally. Update 14 December 2015: a note by Mark Cryle on the Queensland State Archives website about Queensland origins.

But, like many birthing myths and markers, Anzac Day has a complex story and one of them comes from Adelaide. Today, 13 October 2015, is the centenary of the ‘Adelaide Anzac Day’. Honest History previously reported the lead-up to this day, notably an argument about where the money raised was going and a clarification about the links between the organisers of ‘Anzac Day’ and those who wrangled the traditional Eight Hour Day celebration which, in 1915, gave way to a commemoration of Anzac, less than five months after the landing/invasion and while troops of many nations were still clinging to the rocky slopes of the Dardanelles Peninsula.

ANU academic, Gareth Knapman, has written a number of pieces on what happened in Adelaide and one is in Legacies of War (2012) edited by Nigel Starck. Knapman notes the contemporary importance of Eight Hour Day or Labour Day. He also points to the irony that the only servicemen to carry weapons in the Adelaide parade were naval reservists (who eventually sat out most of the war) but that there were Gallipoli wounded travelling in cars, plus 2000 recruits. The wounded were recognised but, says Knapman, ‘the great unstated truth is the commemoration of the dead’. The day ended at the Adelaide Oval with races, novelty events and a mock  crash of a tram car. Knapman’s article includes illustrations.

The Adelaide Anzac Day was reported in the Advertiser and the Register, which also mentioned parades in other South Australian towns. The lengthy article in the Advertiser article had the headlines ‘A stirring demonstration’, ‘Streets bright with colour’, ‘Citizens give generously’ and ‘Pageantry and fun’. There were many decorated floats, including the Kaiser caricatured, John Bull and Britannia. There were lots of ‘pretty young ladies’, particularly seeking donations from men. Given the origins of the parade in Eight Hour Day, it is not surprising that there were plenty of trade union floats, some of them sticking to traditional Labour themes.

Among other resources, Yvonne Perkins’ summary of the history (both Adelaide and Brisbane) is excellent and includes some links to further material. Perkins notes that the organisers of the event saw it as a one-off, assuming that the war would be over soon. While that particular prediction was way out, Gareth Knapman notes that Eight Hour Day was back to normal in 1916. He adds that there were Victorian ‘Anzac Days’ in December 1915 and January 1916 but the ‘real’ one sprang from Queensland, as Moses and others have recorded.

The object and mood [of the Adelaide venture, Knapman concludes] resembled a mardi gras mixed with Harvey Norman’s Australia Day sale. On the morning of Anzac Day, the Advertiser awkwardly pontificated: “All must pay the price of Empire. If all may not lay their lives upon the altar of their country, at least all may dip deeply into their pockets and contribute a portion of their resources to meet the needs of the living victims of the red gods.” Despite high rhetoric, obviously most people were not about to pay the ultimate price. In reality, Anzac Day was a public holiday, a day of leisure and shopping.

Yet, the Adelaide prototype had an effect. In September 1915, says Knapman, ‘the term “Anzac” was embryonic in the Australian imagination’. Part frolic as the Adelaide day was, calling it ‘Anzac Day’ contributed to that label attaching permanently to 25 April. Also, by combining the traditional Eight Hour and the new commemorative themes it set a trend of seeing Anzac Day as a ‘unifying day’. 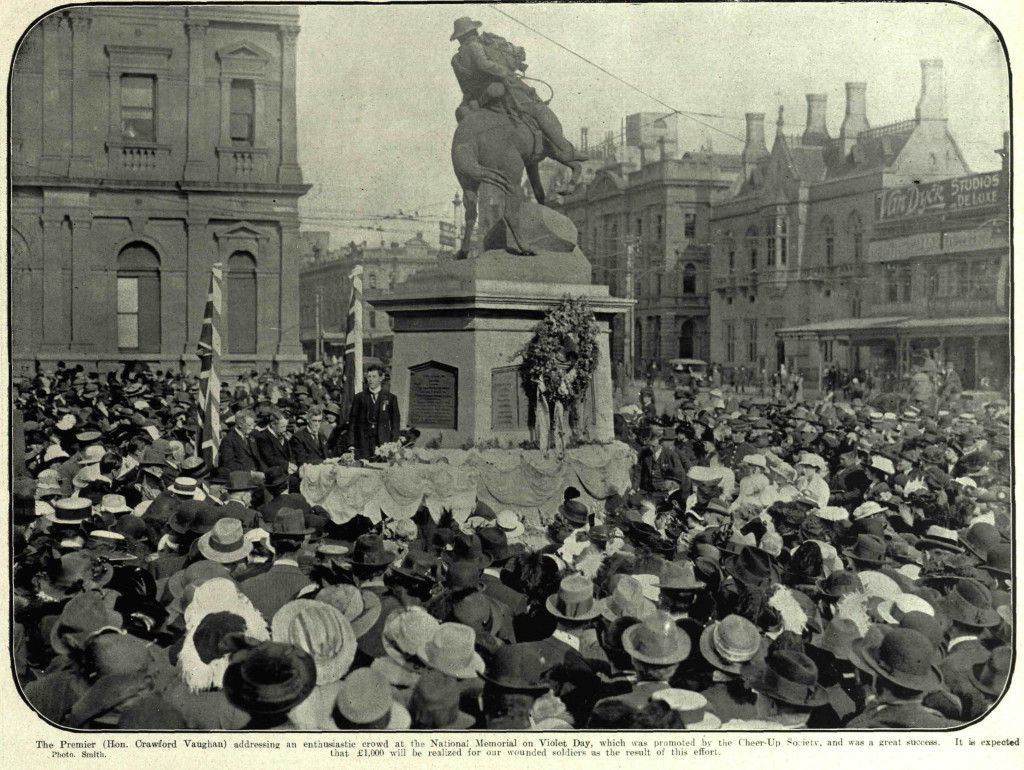 See also: David Faber on the Dardanelles Cenotaph in Adelaide, believed to be the first war memorial to the campaign, and unveiled in September 1915.