‘The second First Lady, the pretend colonel, and the dogs of Ottawa: some alternative decision-making scenarios for heads of state’, Honest History, 30 November 2017

One thing often leads to another in the blogging business. A little while ago Honest History collected some resources on what Washington knows as ‘MMKT‘, the informal arrangement where the 45th President of the United States is said to be kept out of trouble by three generals (Mathis, McMaster and Kelly) and Secretary of State Tillerson, who was formerly in the oil business.

We linked MMKT to the story of how then Defense Secretary, James Schlesinger, put the word around that any late night attempts by the rapidly unravelling President Richard Nixon to get his hands on the ‘nuclear football’ (the codes to launch a nuclear strike) should be put through him, Schlesinger, or the then Secretary of State, Henry Kissinger. We will never know if this story is true but it certainly seems to have been a good idea.

Here are some other stories where the evidence is rather easier to come by. They are not primarily about Australian history; they are certainly about how we can learn from history.

Worn out by domestic politics, having to be a war president against his inclinations, and now trying to achieve a robust peace, President Woodrow Wilson of the United States had a stroke in early October 1919. What happened next is still not entirely clear but most historians lean towards the interpretation that the reins of US government were held for at least a few months by the president’s wife, Edith Bolling Galt Wilson. (Edith was the second Wilson First Lady – the first, Ellen Axson Wilson, had died of illness in 1913, not long after Woodrow took office.)

How did this come about? Wilson collapsed during a strenuous speaking tour to support the ratification of the Treaty of Versailles. Back in Washington a week later he had a stroke, which left him with impaired mental faculties, paralysed on one side and partially blind. He was bedridden for several weeks, then had to use a wheelchair and later a cane. An unrelated infection almost killed him. His wife, his doctor, Cary Grayson, and his aide, Joseph Tumulty, then kept the world at bay, even after February 1920, when the President’s condition became publicly known (although much was not revealed until after his death in 1924).

‘Nearly a year and a half of Woodrow Wilson’s term in the White House remained [after the stroke]’, says his biographer, John Milton Cooper, ‘but he would never again occupy his office and wield its powers as he had done before’. This was, writes Cooper, ‘the worst crisis of presidential disability in American history’. By February 1920, Wilson was taking part in meetings (with his posture arranged to conceal the extent of his disability) but his behaviour for the remainder of his presidency – he left office in March 1921 – was erratic and occasionally delusional.

For the first few weeks after the stroke, Edith Wilson read all the papers that came to the office and decided what matters should be brought to her husband’s attention, although it is probably overegging it to say she had taken on the role of ‘acting President’, ‘Presidentress’ (as some commentators alleged at the time), or ‘the first female President’. She herself (in her memoirs, written in 1939) described her role as ‘stewardship’ and denied that she took decisions. Much was delegated to Cabinet members.

What to do formally? This was well before the 25th Amendment to the United States Constitution and attempts to use the then existing provisions foundered. After some manoeuvring from Secretary of State Robert Lansing, attention turned to the Vice President.

Wilson … was not dead and not willing to resign because of inability. As a result, Vice President Thomas Marshall refused to assume the presidency unless the Congress passed a resolution that the office was, in fact, vacant, and only after Mrs. Wilson and Dr Grayson certified in writing, using the language spelled out by the Constitution, of the president’s “inability to discharge the powers and duties of the said office.” Such resolutions never came.

It seems that Wilson had freely discussed affairs of state with Edith even before his incapacity, so perhaps she was used to being at the pointy end. Wilson also had something of a track record of letting other people accumulate power. His key adviser until early 1919 was Edward M. House, known as ‘Colonel House’, though he held no military rank. House knew his way around elected politicians like Wilson but had a clear view of his own role. ‘I have been thought without ambition’, he said. ‘That … is not quite true. My ambition has been so great that it has never seemed to me worthwhile to strive to satisfy it.’ One biographical note says ‘it seems fair to conclude that he served as much as a confidant and representative of the President as a true counselor’.

House helped nudge the peace-loving Wilson towards joining the war. He travelled to Europe a number of times after 1915 under instructions from the President, at first trying to bring the warring nations to the negotiating table, then promoting Wilson’s ‘Fourteen Points’ for ending the war, and for what became the Treaty of Versailles and the League of Nations. House seems to have exceeded his brief, however, and he was let go early in 1919. House had lived in the White House and he and Wilson had became particularly close between the death of the first Mrs Wilson and the arrival of the second. House and Edith Wilson did not get on, however, and it is possible this antipathy played a part in House’s fall from favour with Wilson.

The ‘Edith Wilson regency’, if that is what it was, was one piece of evidence that encouraged US lawmakers – eventually – to bring in the 25th Amendment, on ‘presidential disability’, and that is one piece of constitutional law that lurks in and around Pennsylvania Avenue in 2017. The other, of course, is impeachment. (The 25th Amendment was used in 2002 and 2007 when President George W. Bush was anaethetised for colonoscopies and Vice President Cheney took over for a couple of hours.) 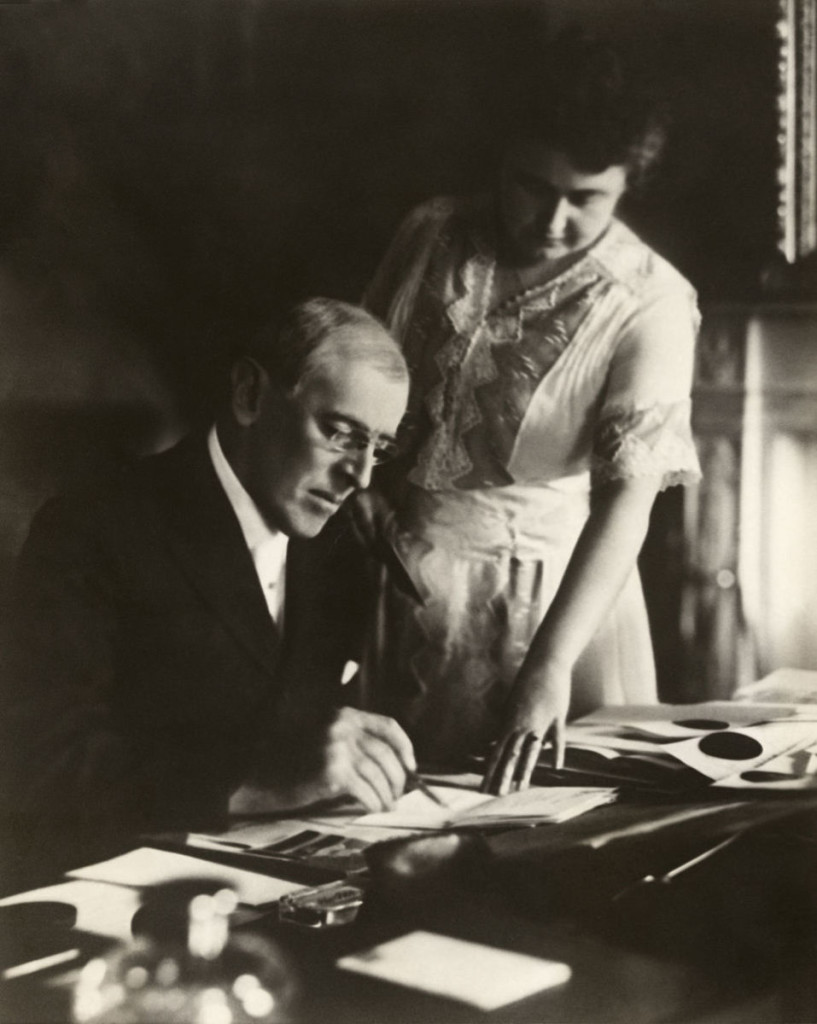 Edith Wilson helps President Wilson, 1920, after his stroke – and conceals his paralysed left side (Biography.com)

The dogs of Ottawa

Further north in America, but not long after the Wilson(s) presidency, Canadian Prime Minister William Lyon Mackenzie King (in office 1921-26, 1926-30, 1935-48) also found the going tough, although he was never as ill as Wilson. On the other hand, King was a little odd. A bachelor, he was close to his mother, lacked charisma, made use of prostitutes (or perhaps, like Gladstone, tried to reform them), and set great store by Ouija boards, crystal balls, omens, and spiritualism – he claimed to have made contact with Leonardo da Vinci, his parents after their deaths, and Theodore Roosevelt.

King confided his innermost thoughts to his diaries – which became a great source for historians (and, perhaps, psychologists) after his death. As for communing with the departed, one biography says, ‘The content of the messages was less important than the evidence that the spirits were present and watching over him. This reassurance gave him the strength to deal with the stresses and strains and with the isolation of politics.’ He did not, it seems, ask the spirits for advice.

King’s vice-regal relations and diplomatic forays were also a touch unconventional. In 1926, he had a battle with Governor-General Lord Byng over the dissolution of Parliament; this was known as the King-Byng Affair. He may have been in love with Lord Tweedsmuir (John Buchan) his Governor-General from 1935 to 1940. He met Hitler in 1937 and wrote in his diary about the Fuhrer’s ‘knowing smile’ and ‘smooth’ skin.

King loved dogs and had three of them, one after the other, each of them called Pat, who kept him company for 25 years. It was said that the prime ministerial dog lover sometimes put government papers in front of a Pat and made his decision on the basis of whether the Pat wagged his tail or not. King liked to keep in touch with the deceased Pats also, and is said to have consulted them on matters of state. Once, he felt his beloved mother’s spirit was being channeled through a Pat.

In 1939, King described Pat I (who lived to age 17) as ‘a god-sent little angel in the guise of a dog … a dear little saviour, that is what he is in his faithfulness … asking only to be near one and to share the companionship of perfect trust’. (He talks about Pat I here: ‘he [Pat I] seemed to have an instinct for politics’.) We have found no record of King saying something similar about a human. Pat I ‘was a more familiar figure in Ottawa than many politicians’, wrote a journalist in Pat I’s obituary, ‘and, I fancy, knew a great deal more’.

Despite King’s lack of charisma, he was good at compromise and conciliation, was decisive and had ‘faultless judgement’. ‘It is what we prevent, rather than what we do that counts most in Government’, King said in 1936, and an official biography sees that statement as summing up his success as prime minister through Depression and war. He was a valued ally of Churchill and Roosevelt during World War II. Perhaps his oddities – and the Pats – helped.

And then there was Caligula. It is probably too far back to be sure about this one but it is said that this Roman Emperor (AD 37-41) was so unimpressed by the calibre of bipedal advisors available to him that he decided to make his horse, Incitatus, a consul, sort of a co-prime minister.

Maybe it was so, maybe it wasn’t. Stranger things have happened, and still may. It’s a shame that Mackenzie King didn’t ask one of his beloved Pats to get the word from the horse’s mouth.

* Honest History volunteer researcher, Gerry Schulz, did the research for this article. 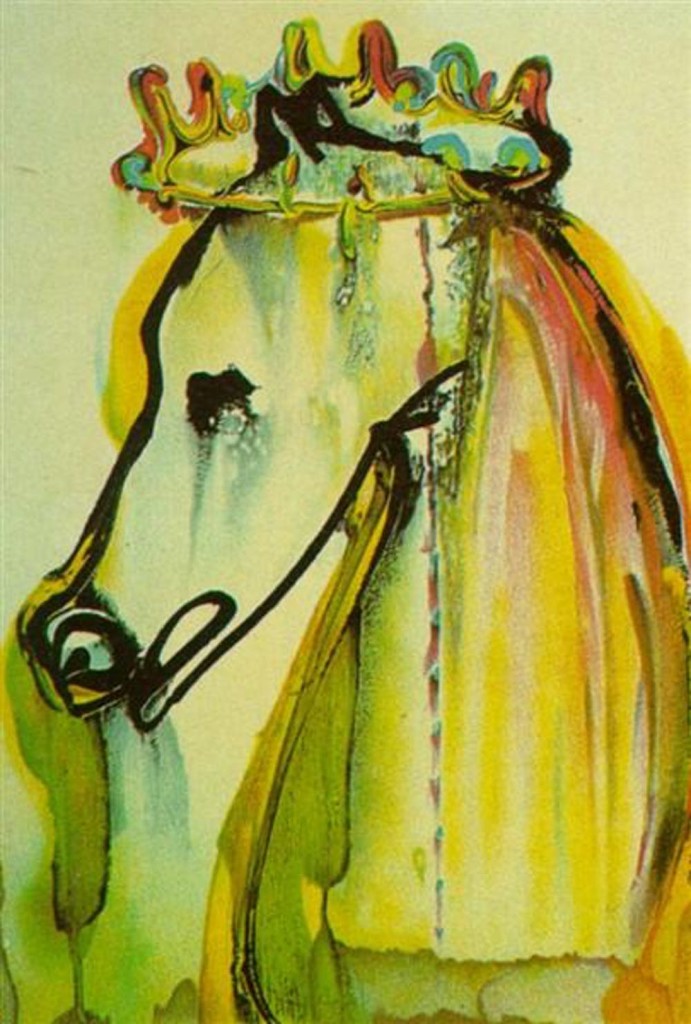