Whichever of the two Matts, Keogh (sworn in this week as Minister for Veterans’ Affairs), or Thistlethwaite (Assistant Minister) takes ministerial responsibility for the Australian War Memorial, he will be greeted by a building site reminiscent of France during the Great War or of Vietnam after bombing by aircraft manufactured by Boeing, whose senior person in our region these days, Dr Brendan Nelson, is also Chair of the Council of the War Memorial.

Given Dr Nelson’s previous political career – and his lobbying for French arms manufacturer Thales while he was Director of the Memorial – he is a prime example of what Honest History and others have previously called ‘the military-industrial-commemorative complex’. It is completely inappropriate that a senior official of Boeing, the world’s No. 3 arms manufacturer, should chair the Council of a memorial to the dead of wars that were fought using the products of that and other arms manufacturers. (In accordance with the Memorial’s Act, Dr Nelson was appointed to the Council by the Governor-General on the advice of the then Minister. He was then elected Chair by a vote of the other members of the Council.)

Getting back to the ministerial Matts, though, we suspect one or both of them will soon be invited to the Memorial by its Director, another Matt (Anderson) to look at progress on the $A498 million – and counting – big build. If Council Chair Nelson is involved, he may well invite the visiting Matt(s) to dust the Tomb of the Unknown Australian Soldier, which was something Dr Nelson did for important visitors when he was Director of the Memorial. Meanwhile, here were both minister-Matts, with Matt Anderson in the background, at last evening’s Last Post Ceremony at the Memorial.

The Memorial has been dressed in deep purple to mark the Queen’s Platinum Jubilee. All around in daylight, however, the digging goes on. Photos taken 28 May 2022 and supplied, except where stated otherwise. 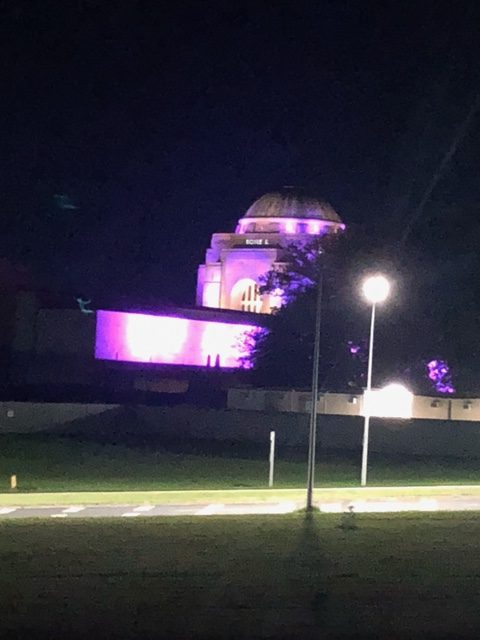 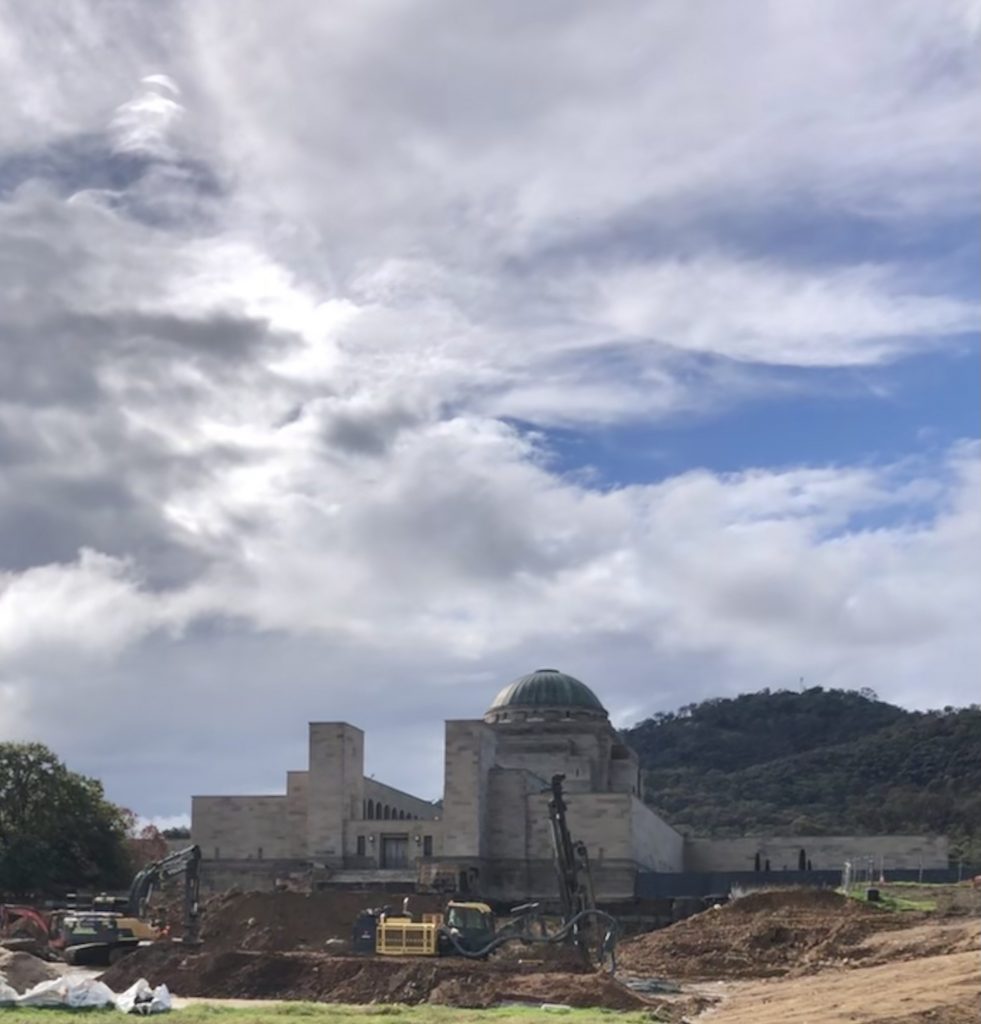 Memorial from the South 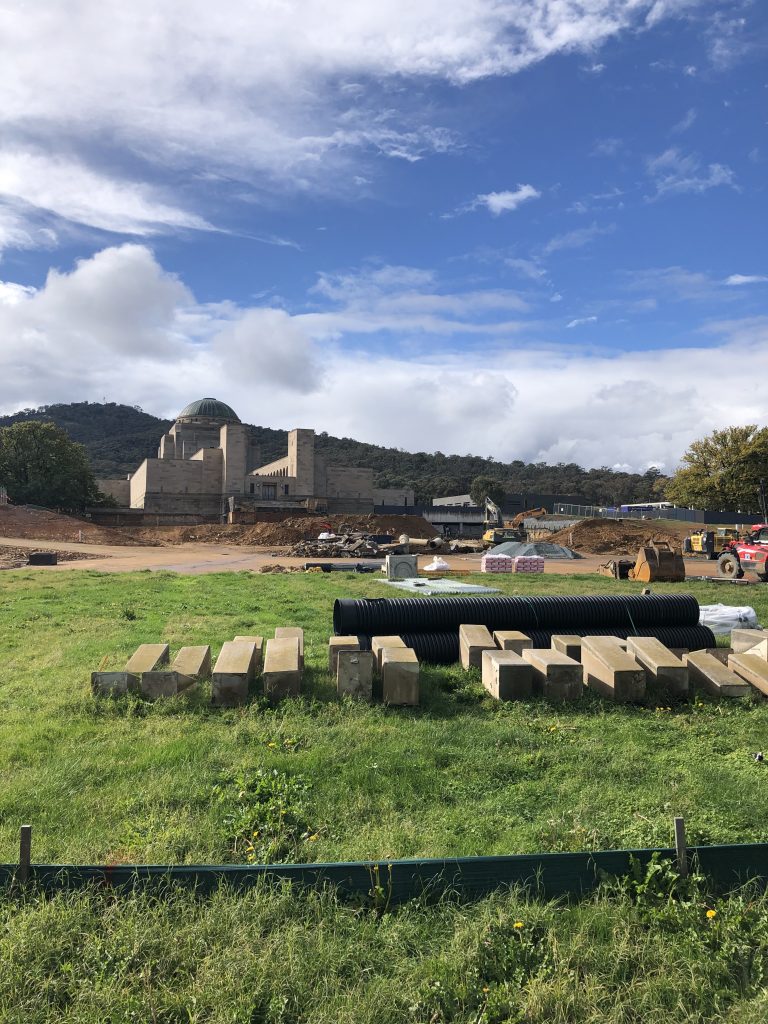 ‘They make a desert and call it peace’ (Tacitus, Roman author) 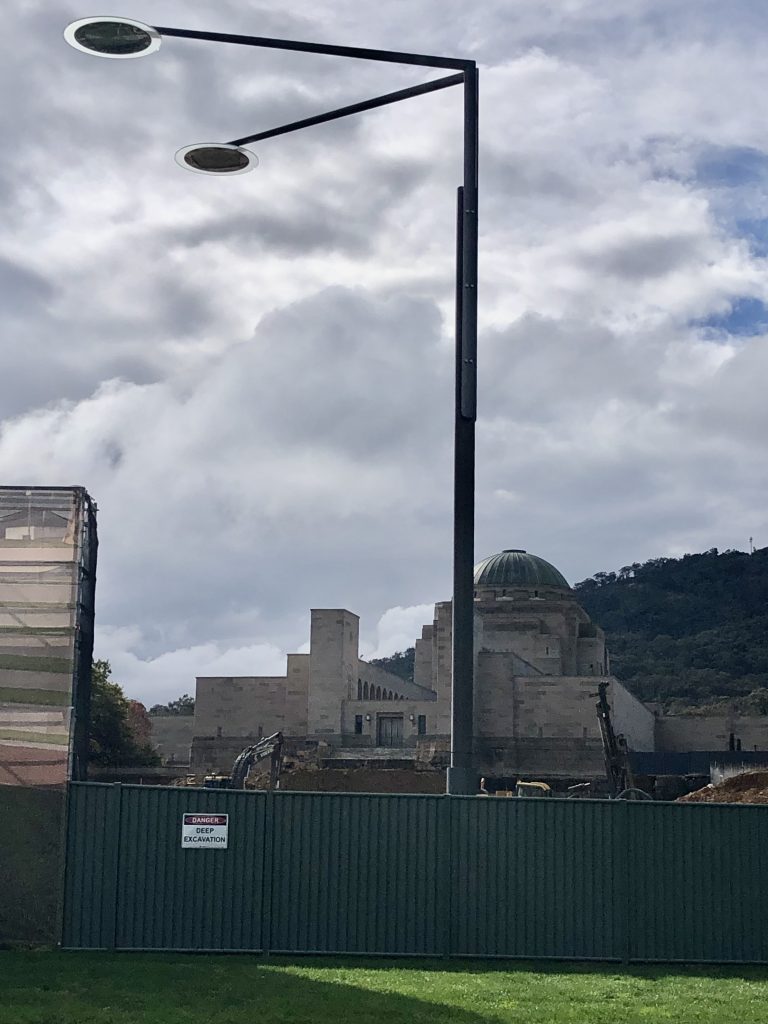 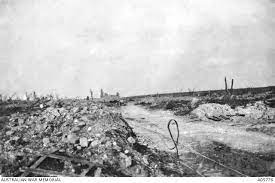 Pozieres, France, December 1916 (AWM): It seems an odd homage to that war to create a similar landscape in Canberra 2022, trashing a supposedly ‘sacred’ site. 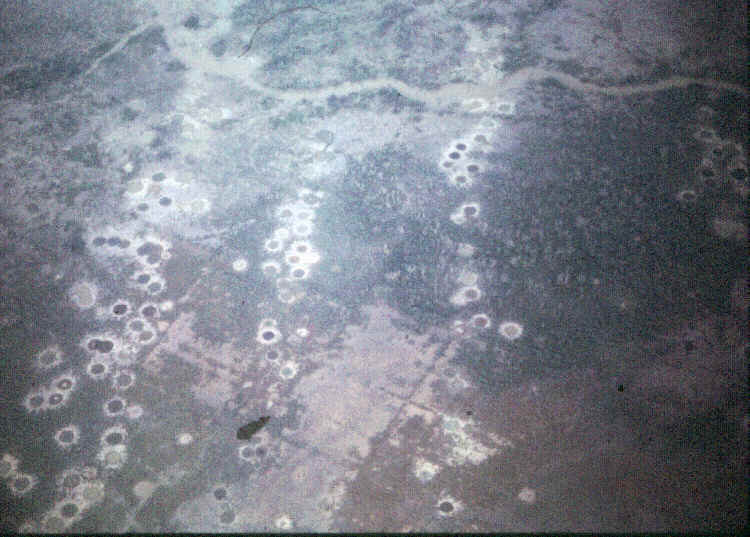 Carpet bombing by Boeing B-52 Stratocruisers during the Vietnam War 50 years ago (Digger History). More on the history of US bombing of civilians since 1945, with intensive use of Boeing products. In 2022, Boeing rolls on and on ($US32 billion from world arms sales in 2020).

Finally, a note about the title of this post. Everyone knows where the phrase ‘Rule Britannia’ comes from. The song is a fine chest-beating ditty that has been popular since 1742 when it was composed. It will surely get much airing during the Platinum Jubilee.

‘Dig! Dig! Dig!’ is also of Imperial origins, dating from 25 April 1915. It may be relevant to the Memorial build more than a century later: it has been suggested by some observers that the Memorial’s haste last year to get excavations under way was to create an air of inevitability about the project. Just in case anyone in government (particularly a new government) had second thoughts, as alternative spending options – or even savings options – came under consideration in these uncertain times.

That ‘Dig! Dig! Dig’ or ‘Dig and be damned!’ approach could well have been intended to elicit a particular reaction from government: ‘They’ve dug these bloody big holes, chopped down all those trees, flattened Anzac Hall. They can hardly stop now!’ Let’s see what happens.

No doubt the new Minister-Matts will hear from people on all sides about recent events at the Memorial and what should happen there next. And about other matters pertaining to veterans and their families, matters which are more important than the fate of the Memorial.

*David Stephens is editor of the Honest History website and has been convener of the Heritage Guardians community campaign which campaigned unsuccessfully against the big build at the Memorial.