Stephens, David: It’s not just about the submarines and the furore with the French: AUKUS, AUSMIN, and lessons from history

‘It’s not just about the submarines and the furore with the French: AUKUS, AUSMIN, and lessons from history’, Honest History, 1 October 2021 updated

Sometimes slang cuts through and helps us understand. Earlier this week, we had a piece about brown-nosing in the context of Australia-US relations. (We discovered that even the word ‘brown-nosing’ originated in the US. Probably.)

See also this from last week, articles by Michelle Fahy and Binoy Kampmark.

And Hugh White in The Monthly on the US Alliance and Afghanistan. The seven paras towards the end, commencing ‘This brings us back to Australia’, are a damning assessment of Australian ‘strategy’ over the last 20 years.

Plus Carol Johnson in Inside Story on our retreat to the Anglosphere.

And Bevan Ramsden in Pearls & Irritations.

Grenville Cross in Pearls & Irritations, reprinted from the China Daily.

Richard Cullen in Pearls & Irritations: ‘Gunboat diplomacy: joined at the hip to the war-addicted US’.

1 December: Douglas Newton in Pearls & Irritations compares Minister Dutton’s fulminations about China and preparedness to go with the US, to statements by Australian Ministers pre-World War I. Following AFR editorial and James Curran (AFR), also critical of Dutton.

Dutton Press Club speech. Earlier Dutton on how it would be ‘inconceivable’ that Australia would not help the US defend Taiwan. Newton finds the same word used by Australians before the Great War about our participation in Empire defence. Newton has said similar things a number of times; use our Search engine.

But here is an idea: if Dutton and his like want to play war games to enhance their pre-election prospects, perhaps go get down and dirty with a few rounds of paintball. Too strenuous? Well, it is usually the armchair generals like Dutton and his supporters who carry on the most obstreperously but who won’t actually be required to charge over the parapet when the whistle sounds.

28 December 2021: Allan Patience in Pearls & Irritations in similar vein to Newton, comparing Hughes on Japan to Morrison on China.

14 February 2022: Former diplomat Richard Broinowski in Pearls & Irritations. ‘With an estimated production time of 30 years before the boats are commissioned and operational, the regional political and strategic landscape may have changed beyond recognition.’

Today, we suggest that commentators – and the people to whom they address their comments – are dills (‘fools’, ‘idiots’ – see various dictionaries; this bit of slang seems to be Australian in origin) if they think the big story recently has been all about whether we stick with the French submarines or go with the US and the UK, and whether or not we do it with nuclear power in submarines which will be available and serviceable at some date in the future (assuming other developments, particularly in drone technology, do not make them redundant first).

Some recent pieces of evidence, if we absorb then properly, might make that epithet, ‘dills’, less appropriate. It is right there in the public domain that it ain’t just the subs, what they run on, and who they are going to offend, that matters. It’s much more than that.

The first piece of evidence is commentary in Pearls & Irritations from long-retired Australian Ambassador to the Republic of Korea, Mack Williams. Williams says,

AUKUS will substantially reinforce the Holy Grail of the Australian Defence Force’s interoperability with the US defence machine but, contrary to what Defence Minister Peter Dutton asserts, equally it will severely reduce our independence which, in itself must change our strategic thinking for the future …

In his comments to the media in Washington, Dutton expanded on the AUKUS list of possible items for cooperation by reference to basing and storage of weapons and materiel … The US has also long pushed for the homeporting of a nuclear powered aircraft carrier at Stirling in Western Australia – which might well be back on the books again with our nuclear powered submarines to be based there. There have also been suggestions of a possible Australian base for UK nuclear submarines operating in the Indo Pacific.

Then there is another piece in Pearls & Irritations from historian, Douglas Newton, an expert on the circumstances leading to, and the fighting of, the Great War. Newton draws nine AUKUS-relevant lessons from the Anglo-German naval arms race leading up to 1914.

Is it a case of ‘here we go again’, then? The Last man and the Last shilling, via All the Way with LBJ, to Over the Top with AUKUS?

Thirdly, and most importantly, there is the official statement from the AUSMIN talks between Australian and US representatives earlier this month in Washington. We sent Ministers Dutton and Payne, the Americans, Secretaries Austin and Blinken. The AUSMIN statement is on the Australian DFAT site and in identical terms on the US State Department site.

The statement is 23 pages long and covers everything from Timor-Leste to Women in Leadership and   from climate change to supply chains. (Afghanistan sneaks in at the end under ‘Other Security Issues’.) The knobbly bit though is at pages 16-17 under the headings ‘Enhanced Force Posture Cooperation and Alliance Integration’ and ‘Strategic Capabilities Cooperation’:

Acknowledging it had been 10 years since the establishment of the United States Force Posture Initiatives (USFPI) in Australia and that the strategic challenges of our time center in the Indo-Pacific region, the Secretaries and Ministers committed to significantly advance Australia-United States force posture cooperation.

Reestablished at AUSMIN 2020, the bilateral Force Posture Working Group convened in May 2021 to develop recommendations to promote a secure and stable Indo-Pacific region and deter our adversaries.The Secretaries and Ministers endorsed the following areas of force posture cooperation:

The Secretaries and Ministers recognized that the operational effectiveness of the Alliance is underpinned by the strength of our cooperation on science, technology, strategic capabilities, and defense industrial base integration.

The Secretaries and Ministers signed a classified Statement of Intent on Strategic Capabilities Cooperation and Implementation, which will further strengthen capability outcomes, deepen our Alliance, and strengthen our cooperation to meet emerging challenges, and support regional stability.

The Secretaries and Ministers discussed Australia’s intent to establish a Guided Weapons and Explosive Ordnance Enterprise.They committed to cooperate on delivering this complex, long-term endeavor, which will complement the United States industrial base and assure defense supply chains in the Indo-Pacific.

The principals also discussed the importance of strong and resilient supply chains and will pursue long term, sustainable Maintenance Repair and Overhaul capabilities in Australia.

The Secretaries and Ministers highlighted the positive progress made in hypersonic weapons and electromagnetic warfare cooperation, including recently finalized bilateral strategies on industrial base collaboration and co-development.

The principals discussed opportunities to further expand practical engagement and integration under the National Technology and Industrial Base (NTIB) to enhance industrial collaboration and build supply chain resiliency.They also committed to strengthen efforts to streamline export controls, and to facilitate technology transfer and protection.

Add in those submarines – on the never-never but locking us in to the US war-waging machine – and Australia looks even less like an independent country and more like the Little Boy from Manly, looking up to other white folks across the seas, and beloved of cartoonists more than a century ago. 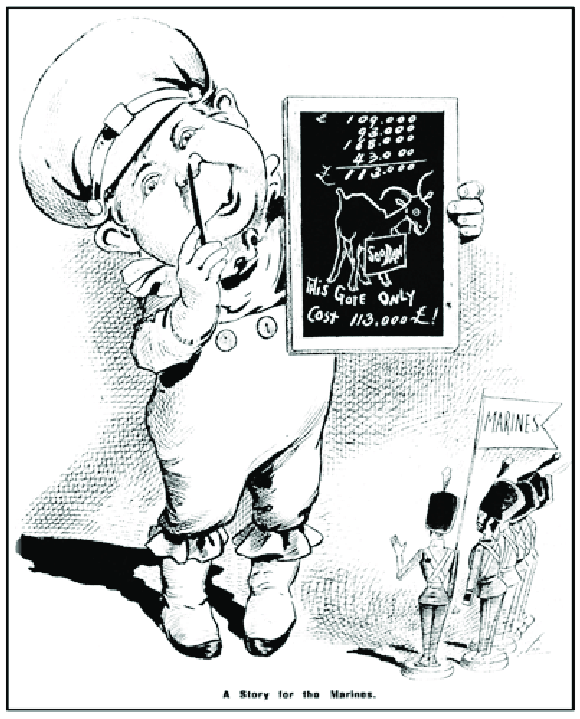 Pearls & Irritations mentioned above is an excellent source for non-mainstream media commentary, with recent articles by Bruce Haigh, Paul Keating, John Menadue, Mike Scrafton, and Alan Patience. There’s also Crikey (Bernard Keane and Guy Rundle; Bernard again; might be a paywall but, hell, a subscription to Crikey is a great investment) and Eureka Street (Vincent Long Van Nguyen). Plus Alison Broinowski of Australians for War Powers Reform. Also Michael Pascoe in the New Daily on the type of US we are locking ourselves into: this is not FDR, JFK, LBJ or even either Bush; it is potentially something much more scary, as Trump recycles.

There is, of course, the matter of what the people think about all this. An Essential Research poll this week shows responses leaning heavily in favour of the AUKUS deal, with 81 per cent of 1094 respondents saying AUKUS will make us more secure (45 per cent) or will not affect our security (36 per cent). Are the 81 per cent (or perhaps just the 45 per cent) ‘dills’, or have they just been taken in by the commentators and the ministers? Whether those figures hold up in the long term depends partly, of course, on whether Australians are sent ‘into harm’s way’, that is, sent on dangerous overseas deployments from which some of them do not return.

What indeed happens afterwards to the men and women we send to fight overseas? Figures this week from the Australian Institute of Health and Welfare show higher numbers of ex-ADF suicides than we have been used to hearing. A useful SBS story. The Minister for Veterans’ Affairs offered more support and faster claims processing.

Which should remind us that everything connects to everything else in this field. The extensions to the Australian War Memorial have been promoted on the assumptions not only that recently deployed and mostly returned service men and women should be recognised more fully (by providing acres of additional space) at the Memorial, but also that this space will be needed to recognise and/or commemorate members of future expeditionary forces.

Some of that space and some of the displays will carry the logoes of, sponsorship by, and equipment manufactured by the world’s richest arms manufacturers. Given the revolving door benefiting senior personnel moving from government and the ADF to the defence industry (where they sell expensive military kit to the people they used to work with, and to overseas buyers who use it to flatten poor countries and kill their children), and given how the defence industry gets kudos from donating its small change to war memorials, we are justified in talking about the ‘military-industrial-commemorative complex’.

Given, too, that these tripartite links are often ignored by the mainstream media, while it focusses on the easy stories (Macron being upset, Macron not calling Morrison, Turnbull dissing Morrison) we could with justification say the ‘military-industrial-commemorative-media complex’. Soft choices by media outlets do matter. Everything connects.

* David Stephens is editor of the Honest History website. For more on the military-industrial complex and its variants, on defence spending, on arms donors, on arms sales, on Yemen, use the Search engine on this website. See particularly this recent piece on the real winners in Afghanistan.

One comment on “Stephens, David: It’s not just about the submarines and the furore with the French: AUKUS, AUSMIN, and lessons from history”