We posted a brief round-up of the recent Estimates hearings of the Senate Committee on Foreign Affairs, Defence and Trade. As the Committee noted, this was the final appearance of Australian War Memorial Director, Brendan Nelson, before he retires at the end of the year. Also present was Department of Veterans’ Affairs Secretary, Elizabeth Cosson, who remained behind to answer purely DVA matters after Dr Nelson left the room.

Here are some more things we noticed, having read the Proof Hansard.

Ms Cosson said, ‘There is gender balance on the council’ (page 99 of the Proof Hansard). Actually, there are just five women on the Council of thirteen. Council biodata is here, minus the recently appointed Tony Abbott and the recently arrived head of the RAAF and ex officio member, Mel Hupfeld. The only way you can conjure gender balance out of these numbers is not to count the three ex officio members (heads of the three services), which seems unwise.

Dr Nelson suggested the government might for probity reasons want to increase the size of the Council, given the number of committees the Council will have to set up during the nine-year proposed expansion program (pages 99-100 of the Proof Hansard). The Minister, Senator Reynolds, made no commitment. The Australian War Memorial Act currently allows a Council of thirteen members (three ex officio plus no less than eight and no more than ten others) so legislative amendment would be required to get a larger group.

There is a Works Application with the National Capital Authority (for carparks). (Canberra Times story today.) A heritage impact assessment will shortly go to the Department of the Environment, with an expected completion date of February 2020. Public Works Committee involvement in the first quarter of 2020 will be followed by another visit to the National Capital Authority. All that going smoothly, ‘the major works will begin in the last quarter of next year. All of that major construction will be completed in late 2026, the final gallery fit-outs completed in 2027 and political leadership cutting ribbons in 2028’ (page 100 of the Proof Hansard).

As for the justification of the proposed expansion, Dr Nelson repeated arguments he has made previously about the need to recognise service in recent wars (pages 101-103). He repeated also the eminently silly point that of the 83 signatories to the March 2019 letter opposing the project, ‘there are only three in my seven years who I have actually seen at the War Memorial’ (page 101). A more forensically astute Estimates Committee would have pounced on this piece of hyperbole, but it was not to be (as it has mostly not been in Dr Nelson’s seven years in front of Estimates Committees). For example, I have visited the Memorial more than thirty times since Dr Nelson took the job (twice meeting him) and, from a quick skim through the list of 83, I can see many others whose professional work, let alone private interests, would have taken them there also.

Have a look for yourself at the list of 83. Heritage Guardians, opposed to the Memorial project, thought briefly of putting our 83 signatories in appropriate tee-shirts (as below), but decided to keep the argument on a higher plane. There were also 1236 signatories on our petition against the project, nine times more than the number of responses the Memorial gathered in two months of consultation – and our petition was open for a quarter of the time the Memorial exercise ran for. 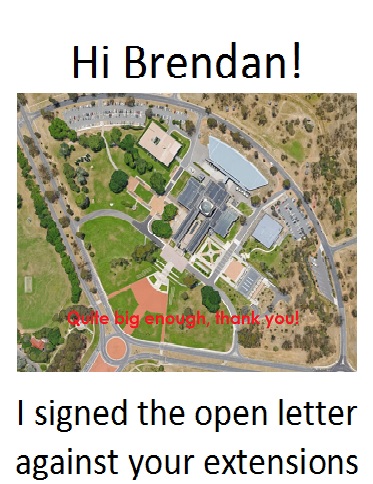 The money and Mr Stokes

Greens Senator Jordon Steele-John asked the Director about the personal guarantee from Mr Stokes to the then Prime Minister that the Memorial would not come to the government for more than $500m. ‘Can we take it from this’, the Senator asked, ‘should the project overrun, Mr Stokes intends to cover the overrun cost? What is the nature of this highly unusual personal guarantee to the PM?’ (page 104 of the Proof Hansard). (For the guarantee, see here and Tom McIlroy’s story in the Financial Review.)

The Director said Mr Stokes’ guarantee did not mean this but arose from Mr Stokes’ long experience in ‘development, major building and construction in both the public and private sectors’. Mr Stokes also had confidence in the quantity surveyors and the people who had done the costings. ‘He wasn’t in any way suggesting there was something questionable about the basis of the costings, nor indeed was he suggesting that he would personally underwrite anything that went over the projected budget for the project’ (pages 104-105). Given that the figure of $500m was being put about in the public square as early as April 2018 – see Richard Llewellyn’s analysis, especially para 88 – long before Prime Minister Morrison announced funding ($498m) in November, Mr Stokes’ confidence was of long standing.

The Director corrected the Senator on who the guarantee was made to (‘in fact, to correct you – the Treasurer’). The Interdepartmental Committee Minutes made available under FOI say this: ‘The current budget forecast is $498.2 million cost over a nine year period. BN [Dr Nelson] noted that the Chairman had given his personal guarantee to the Prime Minister that the Memorial would only seek $500 million’ (emphasis added; meeting of 21 August 2018, page 11 of the pdf). Prime Minister? Treasurer? Treasurer who became Prime Minister on 24 August? Take your pick.

There is another money point worth commenting on. Director Nelson said this: ‘not a cent of the money being spent on the memorial is at the expense of veterans and the Department of Veterans’ Affairs budget or the Department of Defence budget’ (page 101 of the Proof Hansard). It is a good rhetorical line, but it glosses over the fact that over 90 per cent of the Veterans’ Affairs budget is taken up with fixed payments – pensions and the like – under legislation; it is locked in. Discretionary money – where there is a choice as to how the money is spent – is a much smaller amount each year. The government has made a choice to spend some of this money for the next nine years on extending the Memorial; it could have chosen instead to spend it directly on veterans, to add to the considerable – but inadequate – sums already spent on veterans’ mental health, transition to civilian employment, and related programs.

A matter of months

Here’s another discrepancy to add to the one about the Treasurer. Director Nelson said this to honourable Senators this time: ‘We completed the detailed business case; the government considered that in October last year‘ (emphasis added; page 99 of the Proof Hansard).

In February 2019, however, the Director said this to the Estimates Committee: ‘Yes. That [the detailed business case] was fully delivered to the government on time on 21 December last year‘ (emphasis added; page 154 of the Official Hansard).

Then there was this paragraph in the Memorial’s Annual Report 2018-19.

The Memorial Redevelopment Team presented the Detailed Business Case to government on 21 December 2018. This document drew together the various briefings and submissions to government which formed the basis for the announcement of funding. (Emphasis added; page 21) [There was a typo in this quote, amended 2 September 2021. It is now correct. Apologies. HH]

The ‘various briefings and submissions’ included, according to the IDC Minutes, a briefing to the Finance Minister, and perhaps the Treasurer, and a submission to Cabinet. Perhaps the Director confused these with the Detailed Business Case.

Bottom line? The rubberiness of the date on which the Detailed Business Case – with cost assurance at 80 per cent in accordance with the Department of Finance rules – went to government underlines the fact that the really important thing was the funding for the project, and that was firming at around $500m from April 2018 on – perhaps from the point at which Mr Stokes spoke to the Prime Minister – or perhaps the Treasurer – of the day to give his personal guarantee.

The confusion was clear in the exchange at the IDC meeting of 20 November 2018, between the Memorial’s representative (as Acting Chair of the IDC) and the representative from the Department of the Prime Minister and Cabinet:

TJ [PM&C] enquired as to the nature of remaining Cabinet approvals required to secure funding. LP [Memorial] informed the members there were no further approvals required and that the government had announced funding (with bi-partisan support) on 1 November 2018 for the 498.7 million dollars. (page 17 of the pdf)

That was still a month before the Detailed Business Case was fully delivered to government. We will all see whether the project continues to be ‘on time and … on budget’ (Director Nelson, page 99 of the Estimates Proof Hansard).

* David Stephens is editor of the Honest History website and a member of Heritage Guardians, co-ordinating a community campaign against the Memorial extensions.