Stephens, David: ‘Age shall not weary them’: questioning a Kokoda claim

‘ “Age shall not weary them”: questioning a Kokoda claim’, Honest History, 3 November 2017

This week’s 75th anniversary of Kokoda has seen repeated claims about the average age of Australian soldiers in the Kokoda campaign. For example, author and film-maker, Patrick Lindsay, talking to Fran Kelly on ABC RN breakfast yesterday – ‘perhaps, maybe average age less than 20’ (mark 2.20) – and Damien Murphy in Fairfax (Canberra Times hard copy, p. 6) this morning (‘whose average age was 18-and-a-half’). The Australian War Memorial’s note on the battle of Isurava says: ‘The same day [26 August 1942] the first two companies of the 2/14th Battalion arrived to relieve the 39th’s exhausted young soldiers, the average age of whom was 18‘ (emphasis added). 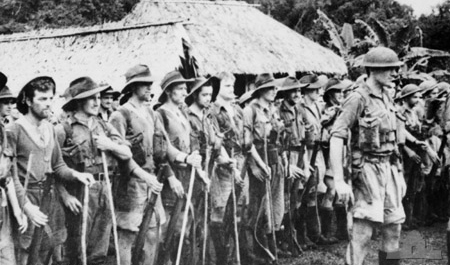 A famous photo of men of the 39th Battalion, September 1942 (Wikipedia)

What evidence is there about the ages of the Kokoda men? We found on the website of the 39th Battalion Association the names of 54 members of the battalion who died in the Kokoda campaign and four more who died of wounds. We were able to find dates (July-September 1942) and ages of death of 57 of these men on the Commonwealth War Graves Commission website.

These figures are evidence against the claim of an average age of less than 20 years for the Kokoda men. The evidence is not conclusive but it is suggestive. There seems to be no reason why the age breakdown of the dead 39th Battalion cohort should differ hugely from an overall 39th Battalion cohort or a broader ‘all units at Kokoda’ cohort.* Others may wish to research this age question further, perhaps looking at the ages of all the Australians who served in the Kokoda and Beachheads campaigns, not just the dead men of the 39th. (We may do more at Honest History.) It may even be possible to find a representative Kokoda cohort with an average age of 18 or 19 but we doubt this.

To provide context, we found this detailed piece of macro research, a 1996 article by Mark Johnston on the civilians who joined the Australian army between 1939 and 1945. ‘Australians who joined the army in World War II were generally young’, Johnston wrote, ‘though not perhaps as young as one might have expected’. Johnston provided this table, based on a ten per cent sample of the army in 1942-43. While the number of 39th Battalion dead is relatively very small compared with this overall picture, we have included the 39th Battalion dead age breakdown in square brackets on each line:

Johnston says this of Kokoda:

Many 19-year-olds fought in New Guinea, Borneo and Bougainville in 1945, and still younger soldiers had been prominent in the fighting on the Kokoda Trail, some three years earlier, for numerous 18- and 19-year-olds were in the CMF battalions which participated in that campaign (emphasis added). [The 39th and four other battalions.]

That is not, of course, a statement about average ages but it is interesting, nevertheless. There were proportionately slightly fewer teenagers among the dead of the 39th Battalion than in the army as a whole at that time. On the other hand, there were in the cohort of 39th Battalion dead proportionately many more men in their twenties, particularly their early twenties, than in the larger army. That fact – and the memory of ‘numerous’ teenagers in the CMF battalions – might have developed, over time as memory dimmed, into an exaggerated average estimate.

Of course, the ages of dead soldiers, whether they were teenagers or older men, should not matter – they are all equally dead and we can argue endlessly about whether they died in vain – except that presenting them as younger than they actually were adds to the pathos. Such presentation is not uncommon in commemoration. Binyon’s poem ‘For the Fallen’, which includes the famous Ode, also has the lines, ‘They went with songs to the battle, they were young./
Straight of limb, true of eye, steady and aglow.’

Above is the Australian War Memorial’s advertisement for Remembrance Day, which depicts World War I soldiers over a caption from Sergeant Jack Sim of the 39th Battalion, remembering Kokoda: ‘They were so young. They were so young. I loved them all.’ They were young, but not that young. Myths with added pathos persist.

To think well, we must … develop an ear for tone, for what rings false, for what is sentimental or has yielded to pathos and so on. (Raimond Gaita, Meanjin, September 2017).

* The Australian War Memorial has an outline history of the service of the various units involved at Kokoda.