Shield, John: Between Sky and Sea: Herz Bergner’s Australian Yiddish novel about the Holocaust and the search for the Promised Land

‘Between Sky and Sea: Herz Bergner’s Australian Yiddish novel about the Holocaust and the search for the Promised Land’, Honest History, 30 March 2018

This is the second of John Shield’s articles exploring the Text Classics list. The first looked at Don Charlwood’s All the Green Year. The titles have been chosen for what they can tell us about the Australia in which they were written. Thank you to Text for the review copies. HH

Between Sky and Sea  is an astonishing inclusion in the Text Classics list because, well, it doesn’t take place in Australia. And only one of the characters is Australian, and he is a Greek café owner whose bit part only marginalises him more. Yet this book (published 1946) was Australian Book of the Year in 1948.

This is a novel I had certainly never heard of, and I suspect if you asked even the most ‘well-read’ of Australians it is a footnote at best, and a Yiddish footnote at that. But what a novel. A group of Polish Jews adrift on a Greek ship, drifting towards Australia sometime around 1941-43. There are no specific times, no specific places. These Jews believe, at first, that they are heading to the Promised Land. And then they drift.

Of course, Herz Bergner[2] is hardly Robinson Crusoe in creating the ’Jews persecuted and set adrift’ paradigm. The Leon Uris book (and later movie) Exodus is the best known of the genre and the image of the SS St Louis on the front cover of Bergner’s book reminds us that the plight of his characters was hardly unique. In Australia, we have a special piece of this history, the ‘Dunera boys’, the Australian War Memorial has a Holocaust exhibition, and there is the Jewish Holocaust Centre in Melbourne. (Historian Ken Inglis’s posthumous co-authored book on the Dunera boys is to be published soon.)

Bergner got here before World War II began, and this book is perhaps his expression of the pain that he felt on watching, from the other end of the world, the genocide taking place in Europe. We were, and are, so far away. There is a delightful moment in the book where a character describes how she will set up a confectionery shop. As Bronya says, ‘never again would she live on the land among peasants and ruin her remaining years’. As I read that, I imagined the Jewish cake shops in Elsternwick and Golds’ World of Judaica in Bondi Junction where you could buy a Bar Mitzvah gift for your school friend.

While I was reading the novel, there was a lovingly crafted report on the ABC’s 7.30, interviewing a group of survivors of the Holocaust. Their stories had been collected by Fiona Harari for her book, We are Here. Each interview spoke briefly of the Holocaust before the narrative turned to the new life and family built in post-war Australia. This is the happy Jewish narrative – those who reached the Promised Land or, at least as Suzanne Rutland calls it, ‘the edge of the Diaspora’.

Bergner’s Jews are very different, though. Mr Faybash is annoying and ubiquitous, painting mirages of the Promised Land while the ship goes round and round in circles. There is the beautifully drawn character of the doctor who, with slow steps and dressed most formally, mourns his predicament. The families move around each other, tolerating, supporting and waiting. But as the Greek sailor says to the Jews, ‘Passengers? What kind of passengers are you? A band of tramps, that’s what you are! Dirty Jews!’ Despite this, or because of it, the reader starts to become part of what is essentially a village at sea.

There is, of course, a great tradition of the Yiddish village story, whether it is Isaac Bashevis Singer or Fiddler on the Roof. As with all these stories, there is resilience and humour in Bergner’s book, but it is very, very black humour. A couple, Nathan and Ida, are central to the story and, through a series of flashbacks, we discover they are in fact sister and brother-in-law, the last survivors of a Polish village laid waste by the Nazis.

An epidemic of typhus ravages the group; the story becomes a slow rasping tragedy. The bodies are shoved overboard, the Jews who are left drift into despair, no longer bothering with appearance – or hope. The ship drifts. Then they see another ship, and then some sea birds. Consider this astonishing passage: ‘When Reb Lazar saw the seabirds he reflected that they were, as in Noah’s Ark, the first messengers of the land. Joy flowed through him, pervading every part of his body.’

But this is no Old Testament flood; the seabird is no dove with an olive branch. Rather, as the passengers get dressed in their best clothes in anticipation of deliverance, the reader knows that it is a false hope. The realisation begins to sink in for those on board, too. In one of the most powerful passages in the novel, Bergner simply tells the terrifying truth:

Meanwhile the ship trudged on for another day and another night and still no land was sighted. A tiny thought invaded everyone’s mind. It sharply turned like a little, poisonous needle, first slowly and uncertainly, then more strongly and insistently.

What if it had been a dove? Would landfall have been possible? The good thing for Noah was that when he finally docked, there was no one there to meet him or turn him away. A Melbourne welcome? Unlikely at best. Yet, Australia hardly had a monopoly on turning a blind eye to the Jews in the second half of the 1930s.

In Edge of the Diaspora, Suzanne Rutland points to a number of factors at play in Australia. First, any refugees or immigrants were unwelcome. Australia was only very slowly emerging from the Great Depression and to welcome any extra mouths seemed inadvisable. Secondly, the Jews weren’t white – we are talking Eastern Europeans – they had a different language, different culture, and different skin colour. They were foreign, alien to the Anglo-Celtic paradigm that had produced the White Australia policy.

But perhaps the most important point is that Europe seemed a long way away; we clung to the hope that it was not really our problem to fix. As I was reading Between Sky and Sea I was reminded of the lovely few pages in My Brother Jack where David Meredith is sent by his newspaper to report on the passenger ships docking in Melbourne. He describes his unease when the first German ships start to arrive bearing the swastika flag. It is vintage George Johnston:

[B]ut  once they all started coming in under the swastika a kind of sinister stain seemed to brush off on them, and one never went aboard them without being oppressed by a feeling of uneasiness, of eyes watching, of mouths opening to ask questions, of jackboots rapping on the steel plate at the far dim ends of alleyways.

The ending of Between Sky and Sea is as tragic as it is inevitable. The ship is torpedoed and all aboard are lost. At this stage the reader is shattered – and the writing is simply astonishing. As the water gushes into the ship Bergner completes the tragedy:

This is a hard novel. The idea that an Australian novel could also be a Holocaust novel seems counterintuitive. This novel was the first Yiddish novel published in English in Australia (translated by Judah Waten) and, amazingly, won the Australian Society of Literature’s Gold Medal for Book of the Year in 1948. Amazingly, not because it is not a beautiful, powerful piece of writing, but that such a novel could not only exist in the public sphere but be feted.

In the introduction to this edition, Arnold Zable makes a pointed reference to the similarities between this story and the SIEV X tragedy of 2001. It is a not dissimilar set of facts. But I think Zable draws a long bow: it is difficult to judge a much more innocent and isolated 1930s Australia with the same standards as our nation might be judged for the ‘turn back the boats’ era at the turn of this century.

On the other hand, neither boatload arrived here. Like the voyagers on the SIEV X, the characters of Between Sky and Sea never made it to Australia, never got to the land of milk and honey. But sometimes those who don’t get here define us.

[1] John Shield is a secondary teacher, now based in Gladstone, Queensland. He has written for Honest History about Text Classic’s All the Green Year, by Don Charlwood, and on the treatment of Indigenous children in institutions, how to teach and commemorate Anzac, review of a biography of Chester Wilmot, Top End Anzackery, review of the edited diaries of William Baker Ashton, review of Leigh Straw’s book on the aftermath of the Great War in Western Australia.

[2] More about Herz Bergner is here and here. 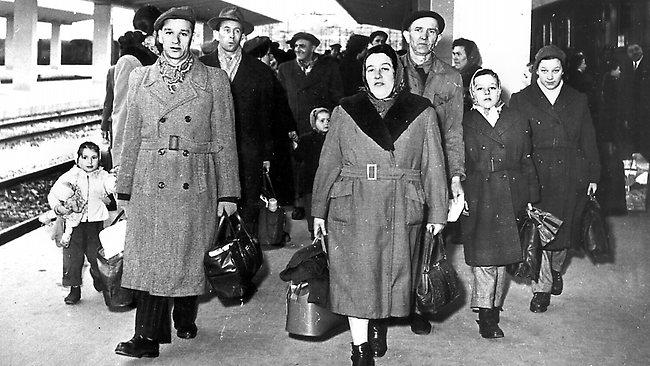 Print This
Click here for all items related to: Australia's war history, Expressing ourselves, People like us