When an event has been going for 27 years it will be looking for new twists. Canberra’s venerable Floriade spring festival has done night-time events, musical themes, tubular bells, water features, sustainability, kids’ corners, men’s sheds and other innovations, and the organisers have talked many times about trying a new location. 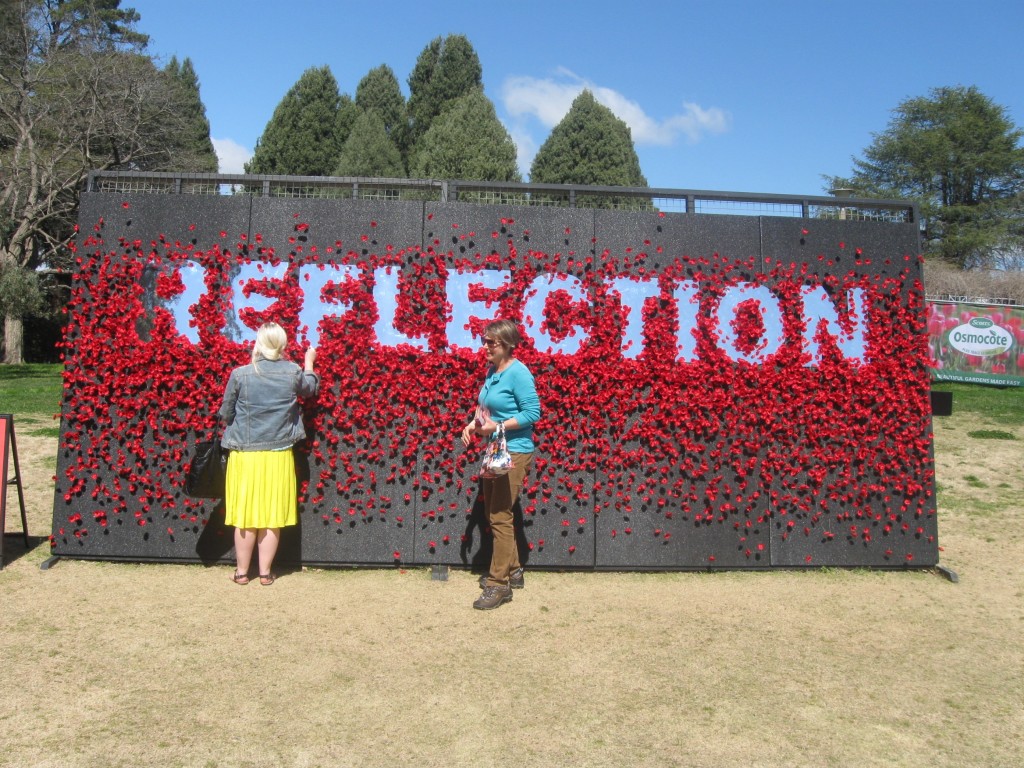 In these circumstances, the centenary of Anzac must have seemed like a thematic godsend to the Floriade team. The tag ‘Reflection’ and the logo of a stylised Flanders poppy would have come easily to mind. Yet, when this reviewer actually got to Floriade, on a lovely spring Friday midday, the commemorative theme lay lightly on the flower beds. There was no explication in the ‘pocket program’, there was no cheerio from the Australian War Memorial or the Department of Veterans’ Affairs (though the RSL was shown as a charity partner) and it wasn’t until we saw the ‘Reflection’ wall of poppies that we even twigged that there was a commemorative theme.

Further enlightenment came from the Floriade media kit. ‘This year’s garden beds’, the blurb said, ‘serve as floral tributes to the 100th anniversary of the Anzac landings at Gallipoli, representing iconic symbols of war and peace such as the poppy, the Southern Cross, two-up and the famous slouch hat’.

Researching further back, we found the joint announcement in April by ACT chief minister, Andrew Barr, and War Memorial director, Brendan Nelson, of the flower bed designs for the 2015 Floriade: Rising Sun; peace; two-up; Last Post; poppy; Red Cross; slouch hat; Eternal Flame; love letter; aeroplane field; colour patches. Pretty much the commemorative ‘usual suspects’ in horticultural form, though lacking a roll of honour or a tombstone; certainly no grieving mother reading a telegram, limbless veteran begging in Martin Place or soldier-settler living in a humpy, all of them just as much part of Australia’s war experience as the cliché list unveiled by Barr and Nelson. 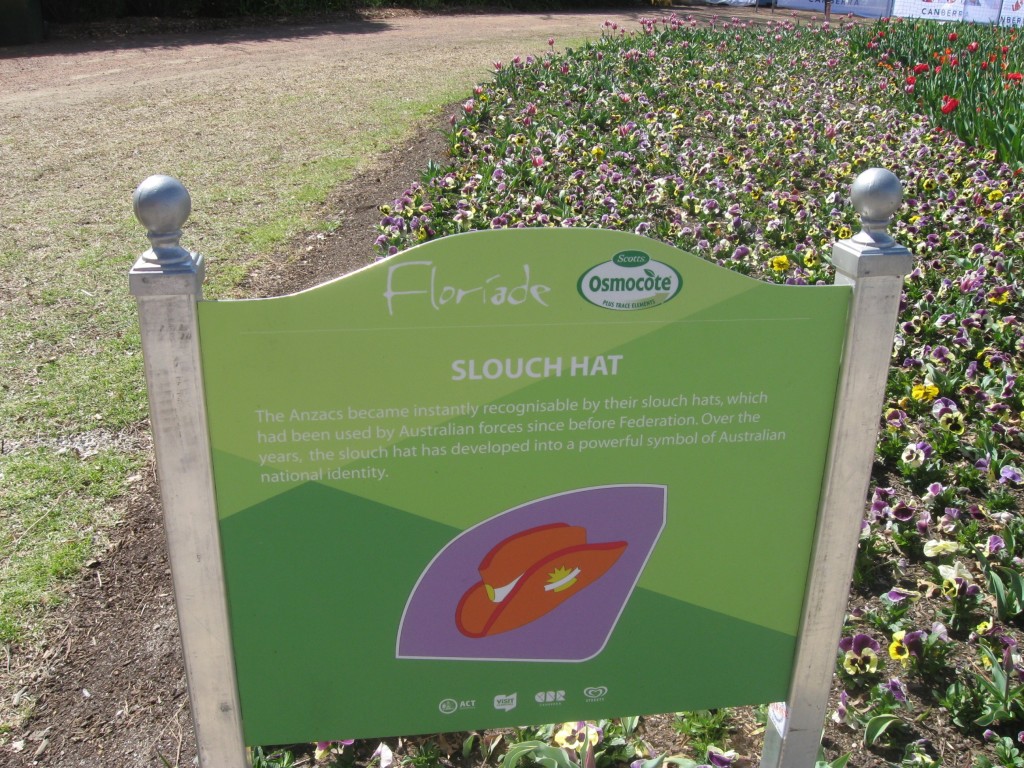 Director Nelson spruiked his usual hyperbole in April: ‘Every nation has its story and this is our story. Floriade this year … is telling and reflecting the story of Australia, the service and sacrifice of Australian men and women over 100 years, who have given us a greater confidence in ourselves and our place in the world.’ (When? How? ‘Us’ then or ‘us’ now? Is this claim borne out by the history of the decades after the Great War?) The Chief Minister spoke in only slightly less ‘flowery’ vein.

On the ground in September there are small signs in front of the flower beds, briefly describing what is portrayed – slouch hat and Rising Sun, colour patches and Red Cross, and so on. A typical one, for ‘Aeroplane fields’, says:

This bed represents the multi-coloured fields of Flanders and northern France areas at the Western Front, where so many battles were fought. The dark flowers form a silhouette of an aeroplane flying over these fields.

Few people seem to be pausing to read the signs, however, and one would need to be in the Ferris wheel, high above the beds, to get a better appreciation of how the designs have been realised. 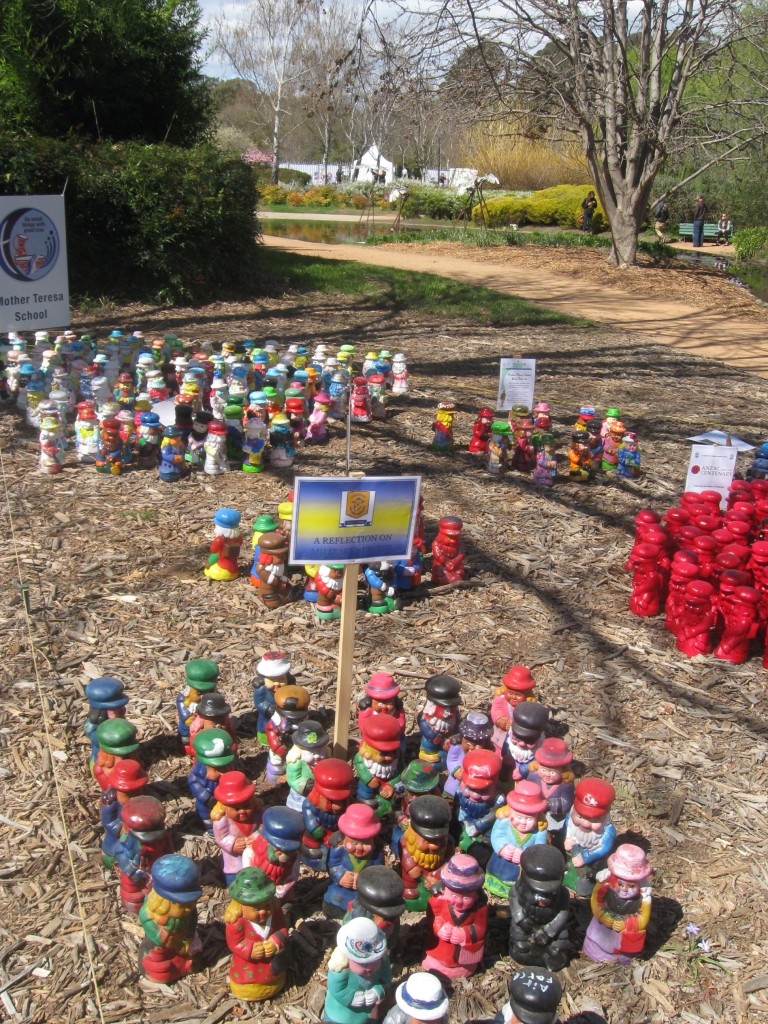 Down at ground level there are gnomes painted by school children, with a competition continuing through the festival and special prizes for expressing the ‘Reflection’ theme. The gnomes we saw seemed to have been a bit resistant to this exercise. They were too small to express a theme forcefully without being massed in large numbers. Comparisons sprang to mind: massed gnomes, cannon fodder. We wondered if the implications had been spelled out to the young gnome wranglers.

Returning up the hill past the cubby houses – very popular with younger visitors and to be auctioned or raffled for charity – this reviewer donated to the cheerful RSL gent at the ‘Reflection’ poppy wall to buy poppies for four dead and two damaged relatives before spending a while in the Inspiration Hub listening to journalist and Churchill Fellow, Nicholas Stuart, describe his long and courageous return from brain injury. This was, indeed, an inspiring story but it seemed a little incongruous that the stage Stuart spoke from was decorated with life-size pictures of Anzac Edgar Adams and Mark Donaldson VC. Still, his talk reminded us that courage is not purely (or even mainly) a military thing.

It was good to see also that, to complement the Anzac nostalgia, the festival has forward-looking themes, ‘embracing a future full of brilliant possibilities‘. This rhetoric was almost Turnbullian in tone but it is being backed up over four weeks around the themes of ‘Stories’, ‘Pride’, ‘Connections’ and ‘Harmony’. We are promised food, art, culture, music, family history, Indigenous themes, multiculturalism and sustainability.

Despite the flower beds and the gnomes, Floriade offers a much broader menu than Anzackery, the over-hyped sentimental ‘remembrance’ of a war for the Empire a century ago. The blurb about ‘Pride week’ mentions high achievers and star athletes as well as ‘heroic countrymen’. A skilled Anzacker, Peter FitzSimons, is a ‘Pride’ speaker but he is addressing the encouragingly broad topic ‘An Australian life’; his talk is tagged as ‘Entertainment’. 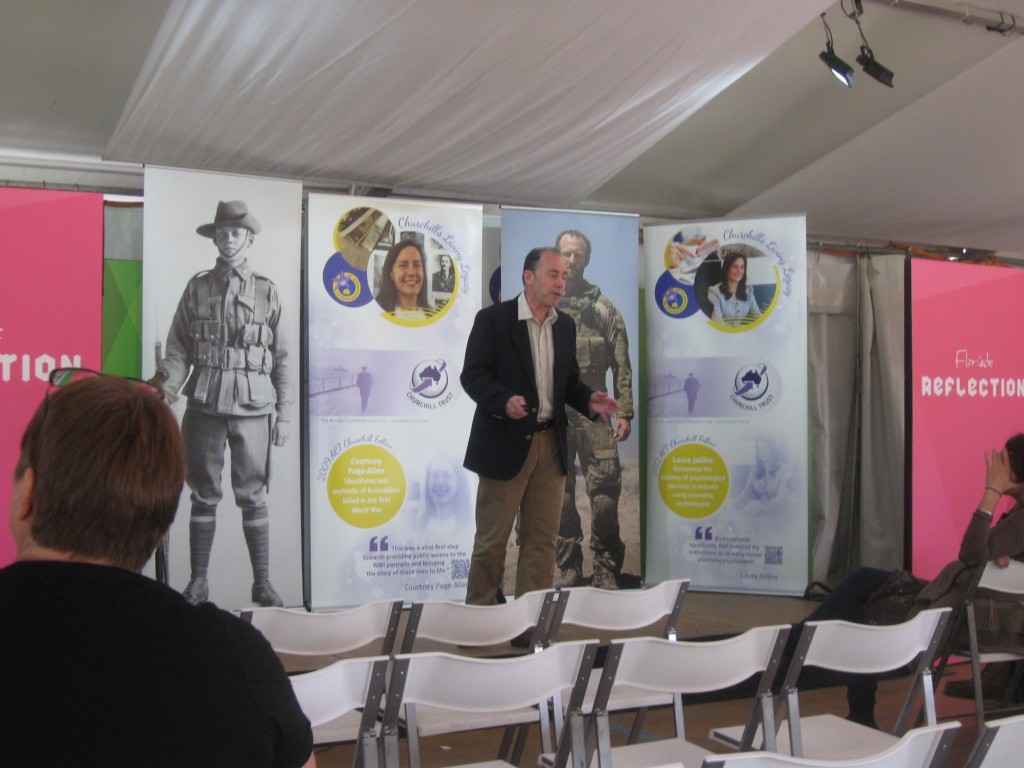 All in all, the commemorative theme is not intrusive at this year’s Floriade; it is still basically a flower show (with ice creams, fast food and guest speakers), not noticeably transformed by the Anzac overlay. By accident almost, it has achieved a sensible balance between the khaki woof and the multi-coloured warp of our national tapestry.

One wonders how many events this centenary year have taken on a commemorative tinge almost as a kneejerk reaction, an easy nod to what was seen to be the expectation of the community – ‘there’s the Anzac centenary so we’d better recognise that’. This is not quite the force-feeding of ‘collective history’ that REM’s Michael Stipe complained about. It is more like the line of least resistance: Anzac, the unavoidable theme, producing a sort of Lest We Forget Lite.