The title of this note is chosen deliberately: while, like any review, this one will do some assessing it is also concerned with accessing – with how the reader gets hold of these volumes as well as what it is in them. And ease of access clearly influences breadth of influence.

This review note looks at the April 2015 issue of Text (fully accessible online), the April 2015 issue of History Australia (mostly subscription only) and an issue of Australian Historical Studies (mix of free, pay per view and institutional subscription) published online in February 2015. Each publication contains lots of meat but this survey is necessarily brief. Readers will make their own arrangements for access and those who have ties to an academic institution or who have deep pockets will fare better.

Text is described as ‘a journal of writing and writing courses’ and is put out by the Australasian Association of Writing Programs, which does not yet have a website but whose work was described last year in The Conversation. This ‘special issue’ is subtitled ‘Fictional histories and historical fictions: writing history in the twenty-first century’, it is edited by Camilla Nelson and Christine de Matos and it includes a dozen articles (mostly – all? – by Australians) traversing, from different directions, the ground of novelists and historians.

Among the Text contributors, we noticed Tom Griffiths, who sees history and fiction as a tag team whose members, though, have distinct roles, Clare Wright, who reflects on her experience writing the television series The War that Changed Us, and Ann Curthoys, who brings her long experience at comparing history and fiction to bear on an examination of EP Thompson’s The Making of the English Working Class. But the heading that gripped us was Christine de Matos’s ‘Fictorians: historians who lie about the past and like it’. Having spent some time on Peter FitzSimons, who calls himself a ‘storian’, we naturally looked closely at a piece about ‘fictorians’, but de Matos’s concern is actually with historians who turn to fiction, rather than with writers who gloss and spin evidence. ‘Historians who turn to writing fiction do so’, says de Matos, ‘for multiple reasons, and gain various personal and professional outcomes from the experience, from rejuvenating their imagination and writing skills, to giving voice to the silences of the archive’.

The History Australia volume is a mixture of special feature and ‘normal’ articles. Honest History is an affiliate member of the Australian Historical Association so we had access to the whole volume which was just as well, because there are only two free access items, one of which is Marilyn Lake’s presidential address from the 2014 AHA Conference, titled ‘1914: death of a nation’. Lake’s address expands themes she has essayed before, including for Honest History, but this is a well-rounded sketch of a pre-1914 Australian social laboratory recognised around the world, particularly in the United States. Lake refers to HB Higgins’ famous 1902 essay, ‘Australian ideals’, which we have highlighted on the Honest History site. 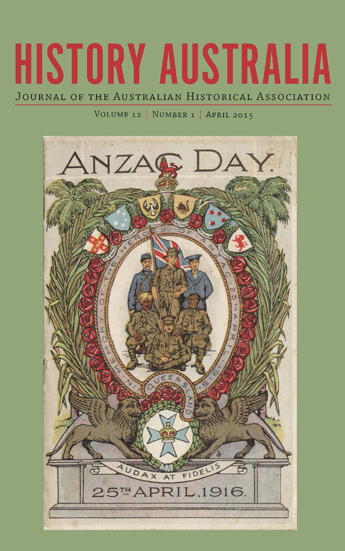 In this issue of History Australia, on the padlocked list but as benefits of the affordable AHA subscription, are a special feature, ‘Remembering Gallipoli in a global context’, with contributions from Mehmet Mehdi Ilhan on Turkey, Joan Beaumont on Australia, Peter Stanley on India, Kynan Gentry on New Zealand, Matthew Graves on France and Senegal and Jenny Macleod on Britain and Ireland. There is also a symposium on humanitarianism and internationalism, three miscellaneous articles, a couple of pieces on ‘historical practice’ (including David Kent’s recollections of the fuss caused by his honest account of how CEW Bean spun the content of The Anzac Book), plus a good spread of reviews of exhibitions and books.

Finally, there is the special issue of Australian Historical Studies on ‘Remembering Australia’s First World War’. This contains possibly the most content of the three volumes – more than 150 pages, including reviews of more than 20 books – but some bits of it are the most difficult to get at and the most expensive. There is free access to an introduction from Joan Beaumont, a pioneering article on Anzac marketing from Jo Hawkins, Margaret Hutchison on Great War painting, Joan Beaumont again on memorial building on the Western Front, Rhys Crawley on military mobilisation, Mark Sheftall on mythologising soldiers here and in Canada, and James Cotton on WM Hughes.

When it comes to the exhibition and book reviews, however, this reviewer, as a graduate but currently non-affiliate of a university, has the choice of paying $104 to Taylor & Francis Online to get access to the whole volume – effectively access to 36 pages, since 118 pages are free anyway, or $40 for an ‘article’, a two page book review! – or lining up at the single computer terminal the ANU’s Chifley Library provides for graduates from long ago to access ANU’s Taylor & Francis subscription.

This all comes down to the risk of bright lights – found even in book reviews – being hidden under bushels. Of course, how to pay for publication is a vexed issue but accessibility of journals is a key to the promotion of contesting interpretations of history. Honest History spokespeople have been heard to say that if every strand of Australian history was spruiked as well as the Australian War Memorial spruiks its single, narrow khaki-tinged strand then Australians would be really well informed about their many-stranded national story.

The same could be said of the Department of Veterans’ Affairs: if every other strand of Australian history was as well promoted as DVA promotes its strand then balance would be well served. As it is, DVA’s skewed and sanitised version of war history for children expands to fill the space available – even if much of it ends up in school rubbish bins. On the other hand, some teachers rely on DVA because they know of no alternatives. 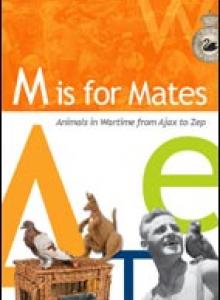 Spruiking well is, of course, partly about money. A future government – one which believed in contestable history – might well look at putting a few buckets of money into subsidising academic journals in history to make them more widely accessible at a reasonable price. Private foundations also might consider such a move.

There are certainly government subsidies and philanthropy around already – we’d be interested to know details – but there clearly aren’t enough. A well-travelled and well-published colleague believes he has had more readers of his Trip Advisor posts than of all his academic publications combined. Despite the efforts of popular history magazines and websites like History Today, Inside History and various family history publications, often cheap in hard copy, or free online, which publish shorter, well-illustrated pieces, and of the efforts of some historians to, indeed, spruik their writing and their evidence-based opinions, there is still a strong whiff in history publishing of a limited circle of academics talking to each other. That is a pity.