In the 1950s Australian-born Paul Brickhill wrote bestselling books that fed the post-war public’s fascination with military memoirs. Titles such as The Dam Busters, The Great Escape and Reach for the Sky all attracted a huge readership and were in turn transformed into popular movies. There was evidence of that popularity in Sydney on 4 May 1956 where a large crowd turned out at the Hoyts Double Bay cinema for the New South Wales premiere of The Dam Buster film, with war heroes United States Lieutenant General Jimmy Doolittle and Wing Commander Micky Martin of the Dam Buster squadron in attendance as guests of honour. 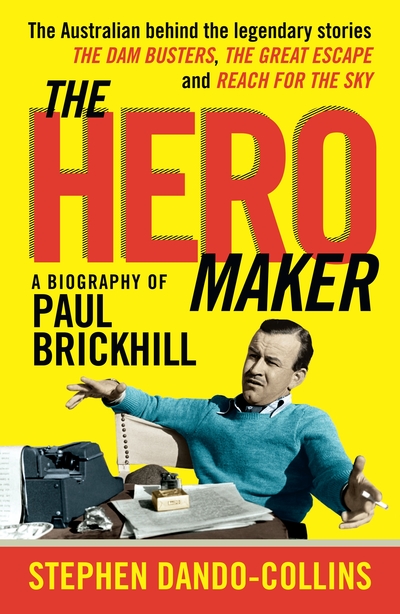 So how did it all start for Paul Brickhill? Paul Chester Brickhill was born in 1916 and started work in journalism as a copy boy for the Sydney Sun. Both his father, a founding member of the Australian Journalists’ Association, and his paternal grandfather had been journalists. Brickhill enlisted in the Royal Australian Air Force in January 1941 and attended flying training schools in Australia and Canada before being commissioned as a pilot officer. He was posted to Britain and served as a fighter pilot with the Royal Air Force. In 1943, while piloting a Spitfire in Tunisia he was shot down, taken prisoner, and sent to Stalag Luft III camp in Germany. During his two years of imprisonment he provided support for fellow prisoners planning and carrying out a mass breakout that was to end tragically and was to provide the basis of his initial bestselling book, The Great Escape, first published in 1950.

During the 1950s, after The Great Escape, Brickhill wrote two other highly successful books, The Dam Busters (1951) and Reach for the Sky (1954). The Dam Busters was the story of the 1943 raid on German dams in the Ruhr Valley by RAF Squadron 617 and also described squadron operations throughout the war. Reach for the Sky was about Douglas Bader, who overcame disability – he had lost both legs in a pre-war flying accident – to provide inspirational leadership.

In the year of the 100th anniversary of Brickhill’s birth and the 25th anniversary of his death, the author Stephen Dando-Collins has written a detailed life of Paul Brickhill, The Hero Maker. It is clear that the author has exhaustively investigated the different phases of Brickhill’s life from early journalism, war service, life as a prisoner of war, post-war writing and fame, to prolonged illness and death.[1] The book provides a chronicle of Brickhill’s phenomenal success as a writer: the British press calculated that in 1953 Brickhill’s estimated income of £115 000 made him the highest-earning author in the country.

After the war and demobilisation Brickhill had been in no hurry to return from Britain to live in Australia but Britain’s prohibitive tax regime required a level of creativity in managing his financial affairs. Living in Britain, he met other Australian writers such as Russell Braddon, Jon Cleary and Alan Moorehead. As well, he was able to link up with his childhood friend, the actor Peter Finch, who was enjoying increasing success in the film and London theatre world.

Brickhill was an acquaintance of Russell Braddon, rather than a close friend, but the path of Braddon’s life offers an interesting parallel with that of Brickhill. It is unfortunate that The Hero Maker does not tease out this comparison. Both Brickhill and Braddon had been prisoners of war at a young age, Braddon for four years as a prisoner of the Japanese in Changi and other locations. Like Brickhill, Braddon’s health had been severely affected by his POW experiences and he was advised to move to Britain where he became a successful writer of numerous fiction and non-fiction titles. He is best remembered for The Naked Island, his story of life as a POW, and he wrote other war-related works.

The financial success of both Brickhill and Braddon was based on the enthusiasm of young baby-boomers – and older readers – for books that offered a chronicle of wartime experience, stories of victims, POWs or combatants. People growing up in that era had an apparently inexhaustible thirst for such works. In the world of post-war publishing, hardback books were increasingly only affordable by libraries, schools and the middle-aged, but, fortunately, in post-war years the emergence of a number of paperback imprints created the opportunity for publishers to garner a wider audience and greater financial return for authors. 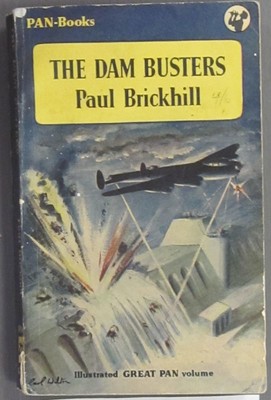 One prominent paperback publisher was Pan Books, developed by a consortium of UK publishers and beginning production in 1944. With attractive, colourful covers the war books of Paul Brickhill and Russell Braddon were an ideal part of Pan’s published list. Both Brickhill’s The Dam Busters and Braddon’s The Naked Island were to earn for their authors the Golden Pan Award, a gold-plated statuette recognising sales of over one million copies of a title.

The length of The Hero Maker attests to the thoroughness of the author’s investigation. Some aspects of the story are particularly interesting, such as the portrait of Douglas Bader and of Brickhill’s relationship with the airman during the research for and writing of Reach for the Sky.

Some readers may find that the treatment of other aspects of Brickhill’s life, such as his mental health issues and numerous marital difficulties, are repetitive and unnecessarily detailed. However, such a reservation does not detract from the overall importance of this biography; in the words of Craig Wilcox in the Australian Dictionary of Biography, Brickhill’s legacy was ‘a clutch of exciting books that helped make comforting sense of the slaughter of World War II, of the eclipse of the British empire, and sometimes of the human condition’. The extraordinary success of those books, and the success of the feature films generated from Brickhill’s work, fully justifies such a thorough coverage of this author’s life.

[1] Information on Brickhill’s service in the Air Force and time as a prisoner of war is available from the National Archives of Australia, see his service record; and here; and his prison camp record.

One comment on “Paul Brickhill: chronicler of bombers, busters and a great escape (review of Dando-Collins biography)”