Online gem No. 5: Medico-Legal Society of Victoria: experience of war

Online gem No. 5: Medico-Legal Society of Victoria: the experience of war (26 November 2015)

Here are some more items from the extensive holdings of the Medico-Legal Society of Victoria (MLSV). Online gem No. 4 also included papers from the MLSV.

From its inception in 1931 the MLSV has organised regular meetings with speakers promoting medico-legal knowledge and fostering professional and collegiate exchange of ideas and information. However, the operations of the Society were suspended from 1942 to 1945, the Society’s Committee resolving on 27 February 1942 that the Society should go into recession for the duration of World War II.

The Society reconvened on 23 November 1945. Both before and after this break a number of papers were presented to meetings of the Society that offered reflections on the impact of war and its aftermath.

On 27 May 1939 Alan Brooksbank presented a paper, ‘Medico-legal aspects of gas warfare’ with the Society’s president, the Chief Justice of the High Court, Sir John Latham, in the chair. Alan Brooksbank had served in World War I undertaking anti-gas work and in later years he developed research and specialisation on the subject. His published works included Gas Alert and Traps for Young Soldiers and Civilians in Chemical (Gas) Warfare, Angus & Robertson, Sydney, 1937.

After the Society resumed operations in 1945, two speakers presented papers that reflected differing experiences of the recent war: Dr A E Coates (later Sir Albert Coates) and John Angus Nimmo (later Sir John Nimmo). Dr Coates, a highly regarded Melbourne surgeon, enlisted in 1941 and was a prisoner of the Japanese for 3½ years. As a serving officer and prisoner he worked in a number of sites, including camps on the Burma-Thailand Railway, and he cared for hundreds of prisoners under deplorable conditions. On 23 March 1946 Coates presented a paper, ‘A prisoner of the Japanese’.

John Nimmo’s experience of war was quite different. A Melbourne barrister, Nimmo was rejected for military service and served as a field officer for the Red Cross in New Guinea, the Middle East and Europe. When peace came he worked in occupied Europe, witnessing the desolation and destruction in the aftermath of war and the horrific scenes of liberated concentration camps. On 25 May 1946 Nimmo drew on his wartime experiences in presenting a paper, ‘Aspects of International Red Cross’.

In the early years after the war, war crimes trials proceeded. On 26 March 1949 T F K Mornane, Assistant Crown Solicitor for Victoria, presented a paper ‘Japanese war trials’ at a meeting of the Society. 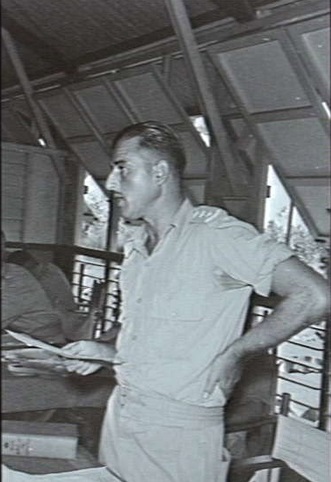