O’Connor, Margaret: “The Mountains of Mourne”: such a sweet, charming song

‘“The Mountains of Mourne”: such a sweet, charming song’, Honest History, 9 September 2019

‘The Mountains of Mourne’ is such a sweet, charming song. Just consider the lyrics, in the form of a letter from a naïve Irish country lad written to his fiancée back in present day Northern Ireland. He has come to London seeking his fortune and describes his unsuccessful attempts to dig for gold on the streets after a sarcastic response from a road worker to his query as to what the workers were doing.

The Irishman bumps into a friend who has joined the London police force, and they chat and reminisce about old times, oblivious to the waiting traffic, while his friend ‘stopped the whole street with one wave of his hand’. He writes of how he has caught a glimpse of the King of England and describes the many beautiful women in London. But he assures his fiancée that, despite the charms of London women, his heart would nevertheless always belong to her, his ‘wild rose’.

I have vivid memories of singing ‘The Mountains of Mourne’ in a certain grand old Victorian town. I moved to Ballarat in October 1996 during the 1990s folk revival, the era of The Dubliners, The Corrs, The Cranberries, Riverdance and Enya. Everyone was tuning up their guitars, working on their demo tapes, taking themselves far too seriously, and applying feverishly for spots as a featured performer at the Port Fairy or Canberra Folk Festivals. As an aspiring musician, as soon as I arrived in town, I set about looking for opportunities to perform.

I managed to get myself included in the (unpaid) line-up for an event called the ‘Ballarat Music Festival’. I was thrilled to bits and wasted no time in letting my work colleagues know. They congratulated me and asked where I would be performing. At the mention of the Provincial Hotel, funny, indecipherable looks would steal over their faces, and they would wish me the best in a slightly forced, contrived kind of way. Usually the enigmatic looks would be accompanied by quick, shared sideways glances loaded with meaning and innuendo. Hmmmm. The Provincial Hotel. Should we let her know? She seems like such a nice girl. Perhaps we should just let her find out for herself.

Curious, I asked a few questions. It transpired that at that time the (aptly named) Provincial Hotel had a reputation (shared with the Eastern Station Hotel) as one of the roughest places in town – strip shows, crims, riff-raff, dubious clientele. That’s a crowning achievement in a town like Ballarat with plenty of form when it comes to this kind of thing. In the Gold Rush era, innumerable watering holes and sly grog shanties catered to the influx of miners, adventurers, entrepreneurs, fortune hunters, and soldiers of fortune who poured into the region from the 1840s onwards in response to the electrifying news: Gold discoveries near Clunes!

The festival organisers had arranged for me to play at the roughest locale since the famous courtesan and entertainer Lola Montez visited town to entertain the miners, and later horsewhipped the editor of the Ballarat Courier, Henry Seekamp, for publishing an unfavourable review of her performance. (True story.) To top it off, I had been scheduled to perform during the worst timeslot of any program: the ungodly hour of 8.30 am on a Sunday morning, when everyone is either in church or hung over (both, if you’re Irish). But I wasn’t complaining. Musical beggars can’t be choosers, and any exposure is good exposure.

Even at that hour, dubious types loitered around the bar and lounge. One of them directed me to an enormous downstairs room with a curiously damp, musty odour and one of the tackiest things I had ever seen in my life: a gigantic 1970s-style disco style glitter ball dangling from the centre of the ceiling. In a novel twist, it reflected lip marks all over the walls and ceiling instead of glittery light particles. Definitely where they held the strip shows, I decided.

It was the middle of winter and, as is so often the case with hilly, inland Ballarat, freezing cold. The low temperatures repeatedly made my guitar go out of tune, an occupational hazard of musicians playing in all sorts of weathers and temperatures. Sigh. I checked and rechecked the tunings so I wouldn’t be one of those musicians I was so often intolerant of, one neglectful of basic pitch.

I nervously ploughed into the opening verses:

Oh, Mary this London’s a wonderful sight,
With the people here workin’ by day and by night.
They don’t sow potatoes, nor barley, nor wheat,
But there’s gangs of them diggin’ for gold in the street.

At least when I asked them that’s what I was told,
So I just took a hand at this diggin’ for gold,
But for all that I found there I might as well be
Where the Mountains of Mourne sweep down to the sea.

While I was singing away in that great big sleazy barn of a room, sounding as though I was straight out of Convent School, bikies and roadies walked backwards and forwards in front of me, carrying sound equipment so colossal that it completely obscured me from the audience. Swearing like troopers, they forensically outlined the various shortcomings of the hotel manager. (‘The manager’s a *******   ****’, they bellowed.) I gritted my teeth and sang on. 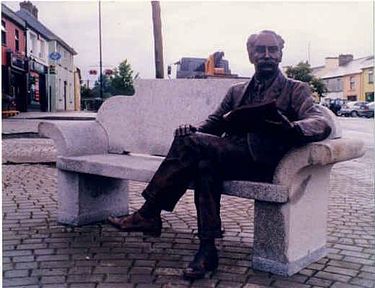 A couple of little old ladies wandered in, shortly followed by my friend Martin. During the third verse, I noticed that his eyes were filling up with tears. Like many Victorians, his genetics are disturbingly Irish, and afterwards, he clarified that neither the insalubrious surroundings nor my performance were to blame. No, the culprit was that ineffably sweet, tuneful, poetic, funny, romantic piece of music bequeathed to us by lyricist Percy French.

So, apparently an aspiring folk performer suffering from acute stage fright can make someone break down and cry simply by warbling on about the Irish Diaspora and how desperately a protagonist misses his fiancée back in County Down – no matter what the circumstances. I guess that says something about Irish music – and about the uncrowned queen of the Irish ballads.

The Provincial Hotel has changed. These days, it’s an upmarket boutique restaurant and accommodation venue, which promotes itself as (quote) ‘playfully sophisticated’. Victorian pubs might be a bit rougher around the edges, but like Irish music, they’re obviously imperishable.

* Margaret O’Connor is based in Canberra. Her interests include music, history and sustainable living. She tweets at: (at)MargaretOConno5. She says: Thanks to the administrators of that great Facebook page, ‘Historic Hotels of Ballarat’, and the receptionist at the Provincial Hotel who were able to confirm my memories of the basement level band room, the 1970s glitter ball, the strip shows, and the hotel’s reputation in the 1990s.

Editor’s note: My late father had a wonderful baritone voice and ‘The Mountains of Mourne’ was one of his favourites. It and ‘Away in a Manger’ can still reduce me to tears. And I am only one-eighth Irish. DS