Newton, Douglas: Beersheba and the scramble for the Ottoman Empire – and more on the Beersheba centenary boast

Update 8 November 2017: David Faber writes about the Beersheba centenary and the work of Kelvin Crombie (Gallipoli – The Road to Jerusalem), who has tried to put the Gallipoli campaign into a Christian context.

Essentially, Crombie argues that the Gallipoli landings were the outcome of secular European interest in the opportunities opened up by the decline of the Ottoman Empire. That Gallipoli was an outcome is true but then comes Crombie’s post hoc ergo propter hoc fallacy. He goes on to argue, in keeping with a chiliastic Christian big picture view of history, that the taking of Jerusalem in 1917 was the “natural” consequence of the landings in the Dardanelles. He misquotes Churchill to imply that the provincial capital of Jerusalem, the centre of Crombie’s evangelical world view, was the heart of the Ottoman Empire at which the Gallipoli landing was aimed.

Update 3 November 2017: Greg Lockhart on Pearls and Irritations notes that Australian eagerness to celebrate the Beersheba charge has overshadowed the centenary of the much more significant Balfour declaration.

Remember the Balfour Declaration on 2 November 1917. Something the media barely touched during the week was, indeed, the centenary yesterday of that far-reaching announcement when Britain turned the Zionist aim of establishing a Jewish state into a reality by publicly pledging to establish “a national home for the Jewish people”.

Update 31 October 5.oo pm AEST: go to the Tweets of Turkish pediatrician and amateur battlefield researcher, Tuncay Yilmazer, @gelibolu2015 for some notes from the Turkish side (Battle of Birüssebi).

Two articles by Paul Daley in Guardian Australia (here; here). Read them both to the end; the 2016 one touches sceptically on how the charge will be used to bolster Australia-Israel relations; the 2017 one has a gentle kick in the tail. Daley (a distinguished supporter of Honest History) wrote the book Beersheba: A Journey through Australia’s Forgotten War, which has been re-issued for the centenary.

‘Beersheba and the scramble for the Ottoman Empire‘, Pearls and Irritations, 31 October 2017 updated

Posting a link to Douglas Newton’s article allows us to make some background remarks about the Beersheba centenary. Much of the coverage of the centenary of the Battle of Beersheba (Beer-sheva) has a nostalgic and sentimental tone, with lots about gallantry, horses and distant relatives riding in re-enactments in remembrance. There is also a strong Australia-Israel ‘common values/long-time allies’ angle, exemplified by the joint presence of prime ministers Turnbull and Netanyahu at the centenary commemoration. (Details here and we will add speeches as they appear. Turnbull speech. Joint press statement. Netanyahu speech extracts. Videos of both speeches. Report of Netanyahu-Turnbull meeting earlier this year – scroll down to Update 21 March 2017.)

Historian Newton – his full article is here – steps back, however, from the popular take on Beersheba to ask not how Australians fought but why they did, and how that brief charge at Beersheba fitted in to military strategy and geopolitics.

The centenary of the bloodshed at Beersheba this month [says Newton] is being used to bolster a narrow nationalist understanding of Australia’s First World War. Vital truths about the worldwide catastrophe that had enveloped countless millions by October 1917 are being obscured in a flood of media material that focuses almost entirely upon deeds of gallantry and dash.

Among the flood: a special supplement in the Weekend Australian (Jean Bou and Greg Sheridan at least attempt some context; see also Bou in The Strategist); a sentimental take from Phillip Williams of the ABC, stressing the involvement of elderly relatives; Jonathan King in Fairfax, promoting his new book; Nick Miller in Fairfax on re-enactment action; Peter McCutcheon on the ABC on Indigenous chargers; Kelsey Munro (and Jonathan King) on SBS on the ‘forgotten victory’ [sic, despite two movies, a handful of books, and now the current paroxysm]; re-enactments in Queensland, and probably elsewhere. Last month, War Memorial Director Nelson spoke about Beersheba (we have a link to the full text). Celebrity conservative Kirralie Smith loves Beersheba.

Over the Tasman – remember there were New Zealanders (and British) involved at Beersheba also – Tony Wright at Newshub argues that Australian boastfulness is (once again – see our analysis elsewhere of the Monash centre at Villers Bretonneux) the real victor of Beersheba. In fact, the Kiwis probably had more to do with the successful outcome than the Aussies did.

As for the re-enactment, ‘Is this dignified remembrance or simply a bunch of old dudes dressing up and playing war?’ Wright quotes Stephen Clarke, New Zealand historian and author (and great friend of Honest History): ‘IMHO not fan of re-enactments as at best they’re pastiche. Best commemoration support personal contemplation not public circus.’ Other incensed New Zealanders weigh in. Respected military historian, John McLeod, has tweeted, ‘Really! One small iconic action with limited casualties against an enemy already thinning out and set up by NZers capturing Tel El Saba’. 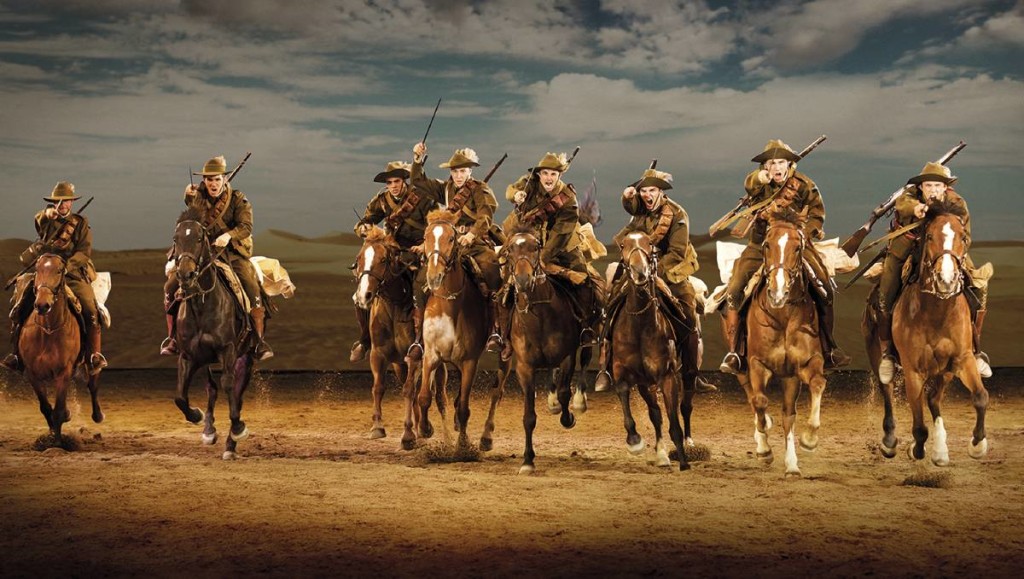 Wright also sums up the cross-Tasman view of the significance of Beersheba:

Beersheba was only a small part of the three year campaign by the British and Anzacs against Ottoman forces in Sinai and Palestine between 1916-18. It wasn’t, as many in Australia have claimed this week, the last great cavalry charge in history, nor was the battle central to the forming of the state of Israel some thirty years later.

These are myths that are now reported as fact in the Australian media, and even by that country’s Prime Minister Malcolm Turnbull and other high-ranking politicians. Myths and legends of heroic battles involving Anzac troops are easy for politicians to grasp, and we’ll see plenty of this when commemorative services are held at Beersheba in a combined Australian/New Zealand service on October 31.

Kia Ora to our friends in Aotearoa New Zealand. But let’s allow Ted Egan, Australian troubadour and sometime vice-regal representative, to redress the balance with a song, ‘Battle of Beersheba’. ‘The greatest cavalry charge in history’, says Jack Nicholson, Gallipoli veteran, to introduce the video, then the Hon. Ted takes us through the story at a brisk gallop. ‘We’ll charge their bloody trenches’, growls General Chauvel, perfectly in tune. ‘Eight hundred wild colonial boys … horses and their riders blown apart … and still they charge relentlessly …’ You get the picture. (The Brits get half a line, the Kiwis nil that we could hear.) Lee Kernaghan has a Beersheba song also, though some will prefer his official video for the Deni Ute Muster.

The last word, though, goes to Douglas Newton. He notes that news arriving in Australia of the Beersheba charge was followed closely – press reports of Beersheba from 5 November, second conscription referendum announced 8-9 November – by the Hughes government’s second attempt to impose conscription:

In Australia, the battle at Beersheba was above all grist for the pro-war propaganda mill. A spectacular victory in a corner of the Middle East boosted the efforts of the Hughes government to impose conscription in Australia. The government launched a second effort to persuade the people to accept conscription at a referendum in December 1917. The government resorted to a phoney question [‘Are you in favour of the proposal of the Commonwealth Government for reinforcing the Commonwealth Forces overseas?’ (HH)], and held the referendum on a work day rather than on a Saturday. Still a majority of the Australian people voted NO. Thus they refused to give the government and the British generals a blank cheque to spend as many men as they wished in their prolonged war. It is probably the most important event of all in the record of Australia’s war.

Print This
Click here for all items related to: Australia's war history, Getting on with the world, Home front, Reality of war