Graham Seal, Professor of Folklore at Curtin University, is a well-published author of popular works on Australian history. His latest book is Great Australian Journeys: Gripping Stories of Intrepid Explorers, Dramatic Escapes and Foolhardy Adventures (Allen & Unwin, 2016). Some of Professor Seal’s earlier books are compilations on specific topics such as Great Anzac Stories: The Men and Women who Created the Digger Legend, and Tell ‘em I Died Game: The Legend of Ned Kelly. Some of his other works are broad-ranging and disparate. In one of them, Larrikins, Bush Tales & Other Great Australian Stories, he described his field as ‘the great Australian storyscape, a never-ending flow of yarns, legends, myths, jokes and anecdotes that we tell each other over time’. 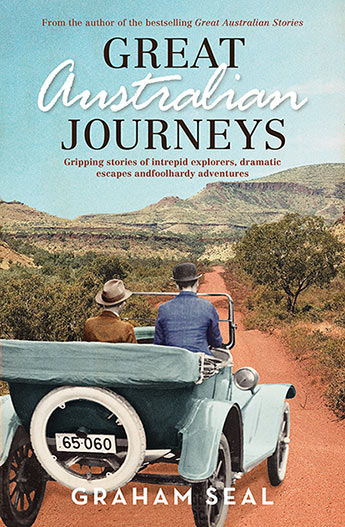 While Professor Seal’s compilations are generally very readable and interesting, their subject matter is frequently so varied that it is difficult to evaluate them in a way that is useful for different audiences. Such is the case with Great Australian Journeys.

The journeys have been grouped together in nine thematic chapters, with titles such as ‘Arriving’, ‘Surviving’, ‘Dangerous journeys’, ‘Mysterious journeys’, and so on. Distributed across these nine chapters are 79 stories. Some of them are very short and do not offer a great deal of detail; others are both detailed and interesting and often humorous. For instance, in the chapter ‘Coming and going’ we find the ‘Spider woman’ story, on the adventures of the beautiful Irish-born dancer Lola Montez; also ‘The most beautiful lies’, describing an 1895 speaking tour of Australia by Mark Twain (Samuel Clemens). With each of these characters, the story of their visit to our shores is vividly described.

In some cases, though, the choice is curious and hardly seems appropriate for the overall subject matter of the chapter. So, in ‘Journeys of the heart’ we find stories called ‘Cab across the Nullarbor’, on the adventures of the notorious Sydney eccentric Bea Miles, and ‘A crush of crabs’, on the annual mating migration of crabs on Christmas Island.

If the publisher of Great Australian Journeys is targeting school or library markets, editorially it lacks some useful details. For example, the great majority of the stories have useful biographical information and, so, a name index would have been a worthwhile inclusion. Also the book is structured so that each chapter is preceded by a photograph relevant to the subject matter of the chapter, but the reader needs to consult a ‘Photo credits’ list at the very end of the book to ascertain the subject and title of each photo.

On a more positive note, the concluding ‘Chapter notes and sources’ has suggestions for further research on the diverse subjects covered by the book. It is a reminder, however, that, while the book is derived from a variety of sources (mainly newspapers, magazines and journals), primary archival resources do not appear to have been utilised.

In this context, there are other Australian historical publications on journeys and travelling that were built around archival research: try Duty-free: Australian Women Abroad by Ros Pesman (Oxford University Press, 1996) and Political Tourists: Travellers from Australia to the Soviet Union in the 1920s-1940s, edited by Sheila Fitzpatrick and Carolyn Rasmussen (Melbourne University Press, 2008). The latter work was based on papers delivered to a conference organised by Professor Fitzpatrick at the University of Melbourne in July 2006.