Since the days of muskets and Gatling guns Australian forces have used weapons built somewhere else. In the modern era, being locked into a military alliance also means being locked to a large extent into particular arms supply arrangements. If armed forces are regularly deployed together it makes sense that they use the same ‘kit’. (There are linkages to war commemoration as well, such as the world’s fifth largest arms manufacturer, Northrop Grumman, holding a party in the Australian War Memorial’s Anzac Hall and the third largest, BAE Systems, having naming rights to the Memorial’s theatrette.)

While Australia has bought and will buy defence materiel from other than American suppliers (Mirage fighters from France, Steyr rifles originally from Austria, possibly submarines from Japan) there is strong pressure to favour American manufacturers. Australia gets 76 per cent by volume of its arms imports from the United States.

The other side of this purchasing imperative, however, is the parts manufacturing spin-off. The Lockheed Martin F-35 Joint Strike Fighter, to which Australia is committed at a cost of $A12.4 billion, has thousands of separate parts and these parts are made all over the world, in the United States, Canada, Britain, France, Italy, Turkey, the Netherlands, Denmark and Norway – and Australia. The United States is the ‘primary customer’ but each of the countries building parts is locked into a partnership arrangement with Lockheed Martin which involves contributing to development costs, manufacturing parts and purchasing completed planes.

The financial and employment benefits from involvement in the project are clearly part of the attraction to all participating countries though there have been many difficulties in the development of the aircraft. There have been suggestions that the project should be scaled back or abandoned altogether. (Update 22 November 2015 on the troubled history of the F-35.)

The Atlantic‘s James Fallows in the article linked above reproduced an interactive map from the Centre for International Policy which showed the more than 250 locations world-wide where F-35 parts are being made. The table below covers the Australian locations only. 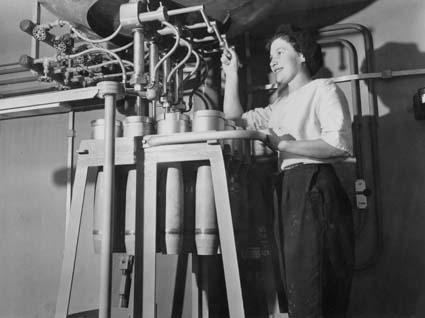 Once upon a time, Australian towns and suburbs like Lithgow, Mulwala and Maribyrnong produced various arms for use by Australian forces, particularly during wartime when imports were problematic. Today, similar locations are cogs in a rather different multi-national defence production exercise.

Print This
Click here for all items related to: Australia's war history, Getting on with the world, The sweat of our brows