The publication of the lecture in Part I stimulated a group of students to widen and deepen the sketch in the lecture. This became Fergus Robinson & Barry York, The Black Resistance: An Introduction to the Struggle of the First Nations against British Colonialism, Widescope, Camberwell, Vic., 1977. The authors asked Humphrey McQueen to contribute the Preface.

The dedication of the book was as follows: ‘This book is dedicated to those brave men and women who died defending their country. They were the first Australian patriots.’

Historical wisdom is not much altered by the diligent efforts of researchers. Most great upheavals in our appreciation of the past come from social, political and economic forces which call forth new historians who find new evidence as part of a wider battle on behalf of hitherto oppressed and neglected groups. 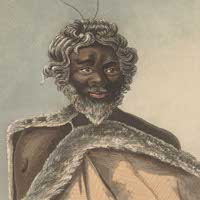 A Wiradjuri warrior, thought to be Windradyne c. 1800-1829 (Wikimedia Commons)

Nowhere is this clearer than in the ways in which Aborigines left and re-entered Australia’s written history. When the battle for control of Australia was on in earnest, the Aborigines were a vital part of the history books. For as long as the Aborigines could not be ignored in real life, they held an important place in the accounts of European expansion.

By the time academic history started to be written here, early this century, the Aborigines’ physical resistance had been broken in the southern part of the continent. And so Aborigines were put aside, treated as curiosities, or, at least, as nothing more than a natural impediment like fire, flood and drought, which the heroic squatters had to overcome.

With only very rare exceptions, this continued to be the way in which historians of Australia treated Aborigines until about ten years ago when the Black power movement in the U.S.A. and de-colonisation in Africa combined with a renewed upsurge of Aboriginal struggle to make it harder for historians to go on being the exclusive voice of the master race.

This book, much more than the dozens of other contributions to the re-evaluation of Aboriginal history which have appeared since CD Rowley’s The Destruction of Aboriginal Society in 1970, is the direct consequence of altered political facts. This does not mean that The Black Resistance lacks objectivity. On the contrary, it speaks a great truth just as the continuing silence by most historians was, and is, nothing more than the voice of the exterminators.

The Black Resistance will have little or no impact on the way Australian history is written and taught. Books and ideas cannot shake the complacency of scholarship. That requires prolonged struggle by students inside their classrooms and in the community at large. Above all, it requires the continued fight of Aborigines to secure their land.

Because the continuance of this fight is certain, it is already time to consider the next steps in the re-writing of Aboriginal history. The fact that most history professors have not got even to stage one is a matter of no importance.

The Black Resistance has rightly concentrated on one task – establishing that violent struggle by Aborigines against foreign invasion was an on-going and continent-wide response. The next major task is to extend and deepen this initial survey. Clearly, whole books can be written about the fighting experiences of many different tribes. Such studies need to be undertaken. They will consolidate this book’s basic thesis while at the same time altering the contours of particular incidents and individuals described here. This process of refinement and strengthening needs to be continued, but it must not become a research end for its own sake as there are other areas which require attention.

Primarily, effort has to be put into the period between the end of openly physical conflict and the start of the present Aboriginal movement, which had its beginnings in the 1920s. For as long as violence was not a reasonable option, Aborigines wisely found other methods of survival, of surviving to fight another day. As just one example, they kept out of sight. When we hear of the discovery of a group of Blacks who had never previously seen whites we can be fairly sure that they had seen whites before; indeed, they had seen them coming and made sure that they kept out of sight. 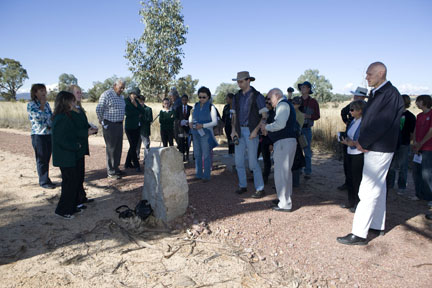 Myall Creek massacre and memorial site, Bingara, NSW (National Library of Australia/Department of the Environment National Heritage database). Myall Creek is believed to be ‘the only time in Australia’s history that white men were arrested, charged and hanged for the massacre of Aborigines’ (28 men, women and children).

These efforts of concealment were as demanding and as magnificent in their particular way as was the Long March of the Chinese Communists. The story of this part of the ‘Black Resistance’ will depend almost entirely on Aboriginal people writing it down, just as they already retell it to each other orally. Of course, they must decide precisely when they want to tell us their military secrets.

Within these deceptively passive forms of Black resistance is embedded a rock-hard determination to hold onto what must not be lost, coupled with the lively desire to reshape some of the newcomers’ artifacts and customs. What these more recent practices may lack in outwardly heroic attractiveness, they more than make up for by their exciting inventiveness, to which Aboriginal women contribute more than their share.

The Black Resistance will add powerfully to the movement for a new Aboriginal history, to a history which does not dehumanize, whether by demeaning or deifying Blacks. The authors have avoided the racist vocabulary of massacres, treachery and going walkabout which still detracts from some recent academic attempts to write about Aboriginal resistance.

This book is a substantial start to one aspect of the movement to continue and expand the struggles which the Aborigines are still waging. Only when the lessons of the Black resistance have been learnt in practice by all the Australian people will we have an independent and socialist nation. New enemies appear. What remains constant is the willingness of peoples everywhere to resist oppression.