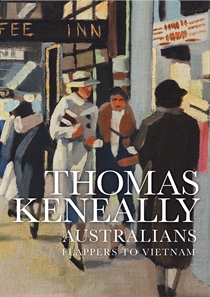 This is a fascinating but flawed book. Like Keneally’s first two volumes, it is mostly written as a collection of vignettes or short stories arranged in roughly chronological order. Thus, Chapter 9, ‘Welcome to the 1950s’, subtitled ‘Decade of employment and dread’, begins with short sections on fears of war and the death of Chifley, before a brief overview of the early 1950s, then longer sections on Petrov, assimilation of Aborigines and Indigenous politics, then a small slice on the role of women, an essay on literary censorship, a long dissertation on Japanese war brides and a short burst on Italian immigration. This approach minimises the opportunities for ‘traditional’ history – the amassing of evidence in support of an interpretation or of a hypothesis about causation – in favour of forensic examination of particular incidents and characters which the author finds interesting in themselves but which also may serve as a microcosm of broader trends and shifts.

Some of the vignettes illustrate the themes in the chapter sub-titles, others do not. Taken together, the vignettes in a chapter add up to the disjointed impressions of someone living and loving in the midst of the Australia of the time – they approximate reality as it was lived – but occasionally one wishes the author would step back from his material and take a good Manly-style punt at a generalisation or two. Nowhere else in the book does the writing or the degree of insight approach that essayed on page 1, which is a pithy summary of how Australia looked and felt in 1919 and what was to concern Australians over the next half-century, the ambit of the book.

What are the good bits then? Some of them are very good, like the pages on the struggles of Australian artists in the 1920s, the flirtations with fascism through the interwar years, the volunteers who went to fight in Spain (on both sides), the World War II invasion by ‘the Yanks’, with its delicate implications for White Australia and for venereal disease, the San Francisco Conference of 1945, and the workers on the Snowy scheme. Minister Hasluck’s assimilation brainwave, which effectively made almost all Indigenous Australians in the Northern Territory wards of the Commonwealth, also gets a close examination as does the 1967 referendum and the lead-up to it.

Then there are the pen pictures of individuals, like the pioneering international relations analyst, Peter Russo, who was still doing News Commentary on the ABC in the 1960s; and Damien Parer, the daring war cameraman, whom this reviewer’s mother remembered fondly as a hero figure long after his death; and David Unaipon, the great innovator; and Russell Braddon, a popular read for young boys in the 1960s; and Whitlam of the RAAF, who incubated many of his ideas during his war service. These are the standout parts of the volume. 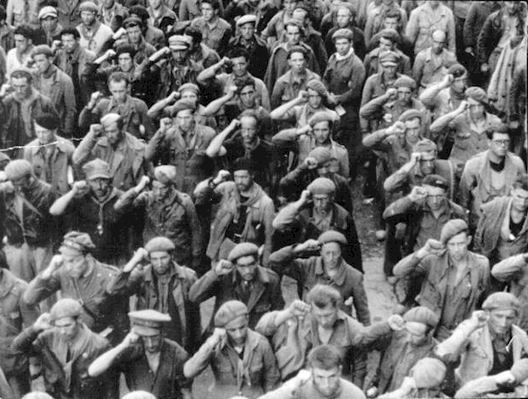 On the other hand, Keneally’s treatment of the Great Depression is weak and thin (barely 20 pages) and there is far, far too much space devoted to the story of military campaigns during World War II. Two hundred or so pages on military history, some of it dealing with campaigns that were not particularly important and tactics that were less so (like the ‘weaving movement’ of HMAS Australia on page 247), is enough to test the most ardent buffs, most of whom would not be reading the book anyway. Here, at least, the vignettes become longer, there is more narrative flow, there are fewer of the abrupt conclusions and sudden jumps from one incident or character to another that are common in other chapters. But these advantages do not make up for the tedium of the ‘war story’ part of the book. The excursions to the home front (austerity, post-war visions, Curtin’s anguish) are far more nutritious.

If some of the byways of war are too well-traversed, the complete omission from the book of the bank nationalisation struggle of 1947-49 is bizarre; choosing interesting vignettes goes way off the rails when it leaves out the most divisive political struggle in Australia since the conscription battles of 1916-17. Bank nationalisation was important both because it looked backward to the great depressions of the 1930s and the 1890s – a repetition of which it was designed to prevent – and because it produced a cadre of incensed pro-Menzies troops to fight and vote in the 1949 election, in which it was a key issue. Yet, in four references to issues important in that election, nationalisation is not once mentioned. (If today’s Australian governments were to tax the massive profits of the big banks, the ghost of LJ McConnan, the chief anti-nationalisation lobbyist and Institute of Public Affairs co-founder, would surely lurch from the grave to mastermind the peddling of a modern version of the florid nonsense he was responsible for then.)

One wonders, indeed, whether some of the author’s odd choices of subject matter are driven by his references. While the bibliography includes some good finds, such as Rosalind Hearder on prisoners of war and Peter Monteath on aspects of the Spanish Civil War, as well as standards like the biographies by Crisp and Day, various volumes of official war history, the Australian Dictionary of Biography and so on, there is no indication which of these references received the most attention.

Which sources were used obviously contributed to the balance of material but that does not fully explain the air of detachment that pervades parts of the volume – as if the author has dropped in on a country with which he is not all that well-acquainted, decided to write something about it, then written about the things that took his fancy. A bit like DH Lawrence in the fictional Kangaroo. (On the other hand, it is good that Keneally does not project himself unduly; we do not get the impression that his childhood in inner Sydney is intended as a microcosm of everyone’s.) The author need not have immersed himself in primary sources but a longer and deeper wallow in secondary sources would not have gone amiss. 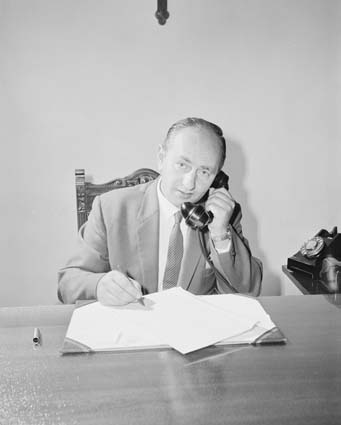 The photographs in the book are excellent, the jacket illustration (a painting by Herbert Badham of George Street, Sydney, in 1934) apt and the printing legible. Yet there are basic errors of fact, syntactical clangers and bibliographical booboos. On page 510 Francis Carroll becomes Catholic Archbishop of Canberra-Goulburn 30 years too soon. (The author probably meant to refer to Bishop James Carroll of Sydney.) The 21st century author, Tom O’Lincoln, becomes a soldier in New Guinea in 1942. There is a place on page 373 where the simple editorial substitution of the word ‘Curtin’ for the word ‘he’ in two places would have turned a risible paragraph into a straightforward one. There are in the bibliography a few silly typos which could have been scrubbed out by a cursory check: Stuart Macintyre’s name is misspelt two lines away from where it is spelt correctly, then the mistake is repeated a number of times; there is a ‘Kate Dorian-Smith’ and a ‘Kate Darian Smith’ on facing pages (the correct version is ‘Darian-Smith’); the attempt to do short-hand bibliographical references comes unstuck through inconsistencies and the result just looks messy.

All history is interpretation but this is an ‘out there’ version of Australian history which not every reader will appreciate all the way through. For the most part, though, leaving aside the war chapters, Keneally’s third volume is still an engrossing read. It spans Australia’s busiest decades with confidence and verve. It must be bloody hard to write about the history of a whole country and keep it interesting. Keneally does.

Print This
Click here for all items related to: Australia's war history, People like us, Strands of Australian history