‘Joined at the hip’ department: Melbourne conference on keeping Australia out of US wars

The prime minister says Australia will be involved if North Korea attacks the United States in the current heated atmosphere. Indeed, ‘we are joined at the hip’ with the United States. He cites the ANZUS treaty.

Even more relevant now is the IPAN Conference in Melbourne on 8-10 September, entitled ‘War, Peace and Independence: Keep Australia out of US Wars’. Details are here.

Alison Broinowski is co-editor of and contributor to The Honest History Book. Her chapter in the book is called ‘Australia’s tug of war: Militarism versus independence’ and it concludes thus:

In 2017 the Trump presidency presents an unprecedented opportunity for Australia to reassess its foreign and defence policies. No certainty exists – if it ever did – that the United States will defend Australia against attack. It therefore becomes more necessary than ever for Australia to pursue its own interests independently, to build closer interaction with our Asian neighbours, and to negotiate ways to diffuse tensions, particularly with China … But if we make Darwin the beachhead for an American war in the South China Sea, we risk the end of everything.

Is ‘Joined at the hip’ to take its place alongside ‘All the way with LBJ’ and ‘We’ll go Waltzing Matilda with you’ as another entry in the lexicon of fatuous, unthinking Australian ‘policy’ soundbites? 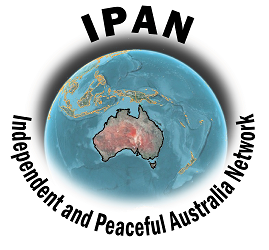 One comment on “‘Joined at the hip’ department: Melbourne conference on keeping Australia out of US wars”