Happy New Year; 2014. Has anyone else noticed the significance of this year? Yes, of course, it is the centenary of the start of World War I and we won’t be allowed to forget that as the commemorative bandwagon rolls on with books, plays, re-enactments, commemorative what-nots, community face-painting, endless speeches and even some reverence. Indeed, it will probably become compulsory to commemorate the war, starting with the anniversary of the unpleasant event in Sarajevo in August 1914.

No, the year 2014 is notable for another reason: it is 113 years since Federation in 1901, just as 1901 was 113 years since the First Fleet arrived in 1788. Not many people have noticed this chronological congruence, as far as Jauncey can tell, but it is worth reflecting on it, if just for a moment and certainly not for a whole year. 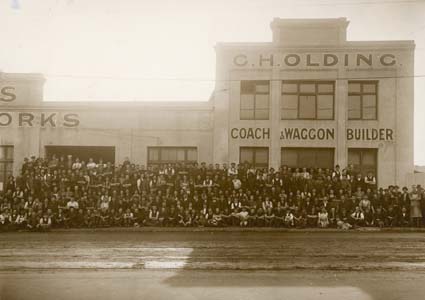 Even if we just go back to 1901, we are very different now to how we were then. There are nearly 23 million of us now, compared with not quite four million then. We come from 200 different countries now where we were primarily Anglo-Celtic in 1901. We speak dozens of different languages and eat all sorts of exotic foods that we would have scorned then. We are no longer lean and laconic but obese and verbose, especially electronically.

Some things are still the same, however. The Indigenous presence is just as awkwardly dealt with in 2014 as it was 113 years ago or 226 years ago. The relationships between the sexes seem to cycle between a rough equality and simply rough treatment. We still like to stick it up the Poms in a way which some of us some of the time find endearing and others find vaguely disturbing. Many of us are still wary of brown and yellow people clamouring to get into our country but are reasonably tolerant of them when they get here. We even changed the rules to let one of them qualify to play cricket for us. Sport still occupies a special place in our pantheon.

Celebration is something we are not sure of, however. We still haven’t quite worked out which days are important to us. John Kelly mused recently in the Australian Independent Media Network over whether Australia Day, 9 May (the opening of the first Parliament in Canberra, 1927), Anzac Day or some other date should be our national feast day. We have such discussions every year without seeming to proceed much further. Someone is always off-side.

Some people have suggested that the growth of Anzac Day in the last two decades has been partly a reaction to the unacceptability of Australia Day, regarded as ‘Invasion Day’ by Indigenous Australians. So we pump up our invasion of the Ottoman Empire to avoid embarrassment about our invasion of Australia. Many of us find it hard to object to a day – Australia Day – which is essentially just one big barbecue.

We fret also over which years are important. Brendan Nelson, now conspicuously of the Australian War Memorial, plumps for 1788 and 1942. Richard Allsopp in The Spectator argued for 1813, the year of the first crossing of the Blue Mountains, as a date we should play up. He could be criticised for being too New South Wales-centric. Some Australians, mainly Queenslanders, refer to Australia Day as ‘New South Wales Day’ and one wonders why West Australians, visited by Dampier, Dutchmen and Portuguese long before Cook and Phillip, have much time for 1770 and 1788.

But really, no single year is crucial. ‘All years make us who we are’, to paraphrase Chris Masters last year, spruiking his television program The Years that Made Us. In the same way, privileging a single day, whether it is Australia Day, Anzac Day, Melbourne Cup Day or Trade Union Picnic Day, sells us short as a nation. We are a far more interesting and diverse country than can be distilled into any 24 hour period.

There is much more to us than convicts disembarking, heroism in bad causes and a horse-race; there should be more meaningful ways of celebrating and commemorating than drinking a lot, watching fireworks or wearing Grandad’s medals. Unless, of course, the point of Australia Day is just the holiday and the point of Anzac Day just the nostalgia. 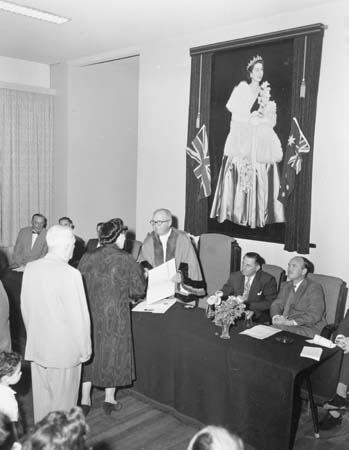 Immigration – Australian citizenship and naturalisation ceremonies – More than 2 000 New Australians were naturalized at 115 citizenship ceremonies held throughout Australia during the 1958 Citizenship Convention and Australia Day week. Metropolitan and Provincial local government authorities arranged the ceremonies as closely as possible to Australia Day, to impress upon migrants who were becoming citizens by law the significance of Australia Day as commemorating the beginning of the Australian nation. After taking the Oath of Allegiance to the British Crown, each migrant attending the Australia Day Ceremony at Randwick, Sydney, was congratulated by the Mayor of Randwick, Alderman W H Lucas, as he presented the naturalization certificates (source: National Archives of Australia A12111, 8278457; photo: Don Edwards)

In the Honest History website, the site you are now paddling in the edges of, there are documentary and media resources under the headings of Anzac analysed, Australia’s war history, the land we live in (exploration and environmental history), people like us (social history), ruling ourselves (political history), the sweat of our brows (economic history), learning and improving (education and science), expressing ourselves (cultural) and getting on with the world (international relations).

How many important years, days and people, how many significant events and achievements do these headings throw up? To give just two examples: our 14 Nobel Prize winners from the Braggs in 1915 to Schmidt in 2011; our failure to be legally ‘Australian citizens’ until 1948 or to stop being ‘British subjects’ until 1984. Australian history has many, many strands, far too many to be adequately represented by histrionics on particular days or commemoration of particular years. Better to get on with making more history than emoting about visions of the past.

A slightly edited version of this article appeared in Online Opinion.

Print This
Click here for all items related to: People like us, Strands of Australian history, Using and abusing history