This little collection pulls together a few threads relating to the following: the event of 1788 and afterwards that some of us call ‘white settlement’ and others characterise as a long, slow invasion and dispossession; the conflict that accompanied that event, which some have called ‘the Frontier Wars’, others a series of massacres, and others something that never happened; the recruitment of Indigenous Australians to wear the Queen’s, then the King’s and, now again, the Queen’s uniform.

Last week, we noted and added to Paul Daley’s comment on the Daily Telegraph‘s vain beat-up of a long-in-the-tooth primer about the language we used to describe aspects of settler-Indigenous relations across our wide brown land. This week, we placed a piece about that fuss with the online journal, Independent Australia (cross-posted to Pearls and Irritations). We tried to summarise in that article the reason why it is fatuous for non-Indigenous Australians to say, ‘not my fault, happened a long time ago’.

That initial “wound in the soul” has been reopened many times and still festers beneath Indigenous family violence, incarceration and mental and physical illness. The strand of our history that traces from 26 January 1788 has left a mark that many of us cannot fail to see and feel but that many more of us refuse to recognise.

While browsing Independent Australia we found a pungent little piece by Nader Galil, which kicks off from a statement by a Jamaican visitor that ‘Australia is the most comfortably racist country in the world’. This raises the issue of whether the comfort produces the racism or the racism makes us comfortable or perhaps both. It makes a similar point perhaps to the headline in our Independent Australia piece, ‘Invading our smugness’.

Galil, of Egyptian extraction, relates how, growing up in eastern Melbourne in the 1970s and 80s, he was regularly subjected to racist abuse. ‘What I have noticed’, he goes on, ‘is that there still [is, despite some improvement] an inherent culture of racism that exists in Australia – although we’re not allowed to say it out loud, it is still embedded in our psyche’.

My thoughts then turn to sadness as I live in a country with no real national identity – or an identity that is based on a colonial or imperial past – one that appeals almost exclusively to the white population and with no regard to the Indigenous Australians or our “multicultural society” – something that we supposedly pride ourselves on.

Unfortunately, the average non-white Australian cannot identify with either Anzac or Australia Day. This excludes nearly half our population from these national “celebrations” which supposedly shape our National Identity. At school I was taught everything about Captain Cook, Horatio Nelson and the ANZACs but never knew anything about the rich Indigenous culture that existed in Australia. To me, Aboriginals were just petrol sniffing nomads that abused alcohol and their women.

The title of Galil’s article, ‘Racism or placism?’ is telling – is it a matter of non-Anglo-Celtic Australians knowing their place? – as is Galil’s point about Anglos, particularly shock jocks, not being able to identify racism because they have never been on the receiving end of it. 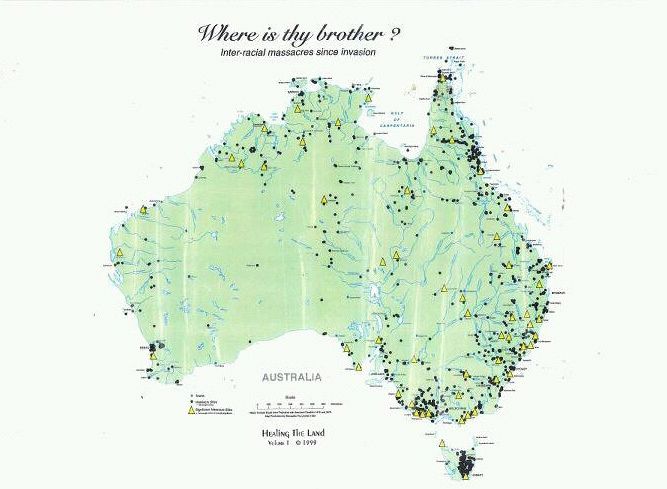 Map from Judith Monticone, Healing the Land: A Closer Look at Needs of the Australian (Re)conciliation movement, by Healing the Land 1999; courtesy of treatyrepublic.org

Black dots on a white map

Independent Australia illustrated our piece with a neat map of massacres of Indigenous Australians since 1788. There are lots of dots on that map, especially down the east coast. Check it out. The map came in turn from a 2013 article by Gerry Georgatos in The Stringer about massacres and The Stringer took it from a 1999 book. The Stringer piece can be compared with the Wikipedia article and other online resources. See also Kristen Zornada in New Matilda.

Australia was founded on bloodshed [says Georgatos], and its historical identity and its origins-of-thinking include slavery (blackbirding), social engineering, apartheid, racism. To deny all of this is to keep Australians hostage to the various veils and layers of racism. Understanding the past is to free up the present and the future from being held hostage by lies. Far too often our ability to discover the truth has been outstripped by the capacity to manifest deceit.

We also found an SBS interview with historian Robert Ørsted-Jensen about his work on massacres in Queensland. He and Raymond Evans put the number of Indigenous deaths for Queensland alone at between 65 000 and 100 000. We have noted Ørsted-Jensen’s work on the Honest History site previously. There are plenty of relevant references under our thumbnail ‘Our First Peoples’. (We make no apology for referring the reader to more and more information; myths that something did not happen thrive on the failure of research just as do myths that something did happen.) The interview is in Danish but it links to some other useful material.

Indigenous service in and out of uniform

Taking one step sideways, we found an article by Sam Provost on the ABC website, dated last November, just before we began working on our piece about the Australian War Memorial’s apparent slight change of direction (as seen in its endorsement of a song) on the recognition of Indigenous service not in uniform, as well as in uniform. We were right to be cautious about that development. Someone at the Memorial made sure the ABC got the message:

The Australian War Memorial (AWM) has published an online history of Aboriginal and Torres Strait Islander people’s service in Australia’s Defence Force, but says this does not signify a step towards commemoration of the Frontier Wars … “The Australian War Memorial’s position has not changed from what the director has said previously,” a spokesman said. “The Frontier Wars should be acknowledged, but the appropriate cultural institution to represent them should be the National Museum of Australia.”

Finally, there is a piece in The Conversation today by Myles Russell Cook about how museum staff are working with Indigenous people to revive culture by producing traditional artefacts in the museum setting. Kimberley Moulton, Yorta Yorta woman and Museum Victoria curator, says:

Without connection to the community, our objects lay silent but our identity and culture are inherently linked to these objects that are very much alive. They are a tangible connection to our ancestor and embody the cultural connection we have to our history and to our living culture and without us being present with them, they stay asleep.

Print This
Click here for all items related to: Anzac analysed, Australia's war history, People like us