Highlights reel: James Fallows on US military has Australian relevance

This long article in The Atlantic, January-February 2015, examines American attitudes to the military but makes points applicable to Australia, given the long-running change in the nature of our military engagements, from mass involvement in World War II to specialised expeditionary forces now. James Fallows is a veteran political journalist.

The complete article is worth reading for its insights. It is also relevant to our current defence policy, as it includes some trenchant analysis of the development of the F-35 aircraft, to which Australia is committed as its ‘joint strike fighter’.

The article bears comparison with James Brown’s book Anzac’s Long Shadow. Compare also with a piece about arms expenditure in Australia and whether it leads to war. Hugh White’s remarks on ‘soft wars’ are also relevant as is Elizabeth Samet on American attitudes to the military.

Fallows describes fulsome praise of the military by President Obama but notes the lack of reaction by the television audience.

This has become the way we assume the American military will be discussed by politicians and in the press: Overblown, limitless praise, absent the caveats or public skepticism we would apply to other American institutions, especially ones that run on taxpayer money. A somber moment to reflect on sacrifice. Then everyone except the few people in uniform getting on with their workaday concerns.

By contrast, American attitudes to the military during World War II were much more balanced.

At the end of World War II, nearly 10 percent of the entire U.S. population was on active military duty—which meant most able-bodied men of a certain age (plus the small number of women allowed to serve). Through the decade after World War II, when so many American families had at least one member in uniform, political and journalistic references were admiring but not awestruck.

Fallows says that ‘[t]he difference between the earlier America that knew its military and the modern America that gazes admiringly at its heroes shows up sharply in changes in popular and media culture’. He looks at irreverent World War II cartoons, thoughtful or satirical war movies and television shows which poked fun at military characters.

Let’s skip to today’s Iraq-Afghanistan era, in which everyone “supports” the troops but few know very much about them. The pop-culture references to the people fighting our ongoing wars emphasize their suffering and stoicism, or the long-term personal damage they may endure.

He refers to The Hurt Locker, Homeland, Zero Dark Thirty, and other examples.

But while cumulatively these dramas highlight the damage that open-ended warfare has done—on the battlefield and elsewhere, to warriors and civilians alike, in the short term but also through long-term blowback—they lack the comfortable closeness with the military that would allow them to question its competence as they would any other institution’s.

Among older Baby Boomers, those born before 1955, at least three-quarters have had an immediate family member—sibling, parent, spouse, child—who served in uniform. Of Americans born since 1980, the Millennials, about one in three is closely related to anyone with military experience.

The recent satirical novel, Billy Lynn’s Long Halftime Walk, by Ben Fountain, targets a ‘thank you for your service’ ritual at a football match. The ceremony does a lot for the crowd’s self-esteem but looks different to the soldiers.

“There’s something harsh in his fellow Americans, avid, ecstatic, a burning that comes of the deepest need,” the narrator says of Billy Lynn’s thoughts. “That’s his sense of it, they all need something from him, this pack of half-rich lawyers, dentists, soccer moms, and corporate VPs, they’re all gnashing for a piece of a barely grown grunt making $14,800 a year.”

Fallows looks for reasons under three headings, ‘Chickenhawk nation’, ‘Chickenhawk economy’, ‘Chickenhawk politics’. ‘Chickenhawk’ is an American term for someone eager to go to war, as long as someone else actually goes. He claims the United States has become ‘a country willing to do anything for its military except take it seriously’.

As a result, what happens to all institutions that escape serious external scrutiny and engagement has happened to our military. Outsiders treat it both too reverently and too cavalierly, as if regarding its members as heroes makes up for committing them to unending, unwinnable missions and denying them … political mindshare …  A chickenhawk nation is more likely to keep going to war, and to keep losing, than one that wrestles with long-term questions of effectiveness …

America’s distance from the military makes the country too willing to go to war, and too callous about the damage warfare inflicts. This distance also means that we spend too much money on the military and we spend it stupidly, thereby shortchanging many of the functions that make the most difference to the welfare of the troops and their success in combat. We buy weapons that have less to do with battlefield realities than with our unending faith that advanced technology will ensure victory, and with the economic interests and political influence of contractors. This leaves us with expensive and delicate high-tech white elephants, while unglamorous but essential tools, from infantry rifles to armored personnel carriers, too often fail our troops.

The condensed version of this plane’s tragedy is that a project meant to correct some of the Pentagon’s deepest problems in designing and paying for weapons has in fact worsened and come to exemplify them. An aircraft that was intended to be inexpensive, adaptable, and reliable has become the most expensive in history, and among the hardest to keep out of the [repair] shop. 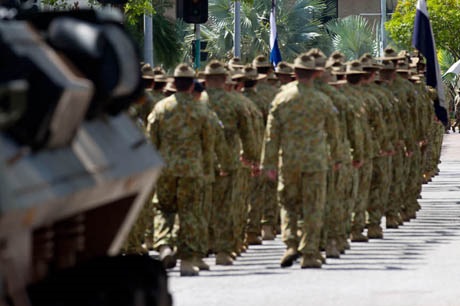 Defence procurement and the military-industrial complex

Fallows then looks at oversight of defence budgeting.

The most recent defense budget passed the House Armed Services Committee by a vote of 61 to zero, with … one-sided debate before the vote … “The lionization of military officials by politicians is remarkable and dangerous,” a retired Air Force colonel named Tom Ruby, who now writes on organizational culture, told me. He and others said that this deference was one reason so little serious oversight of the military took place.

Fallows quotes former military man and former Democratic Senator Jim Webb on how senior military officers, while still in service, pave the way for their future careers working for defence contractors. This affects their decision-making about defence procurement.

Webb says it would defy human nature if knowledge of the post-service prospects did not affect the way some high-ranking officers behave while in uniform, including “protecting the rice bowl” of military budgets and cultivating connections with their predecessors and their postretirement businesses … “What’s new is the scale of the phenomenon, and its impact on the highest ranks of the military.”

Author Janine Wedel talks about these issues as they apply to military officers and more generally.

Public lacks skin in the game; the effects of this

Fallows considers the consequences of public inattention to the military and its priorities.

[P]ublic inattention to the military, born of having no direct interest in what happens to it, has allowed both strategic and institutional problems to fester.

“A people untouched (or seemingly untouched) by war are far less likely to care about it,” Andrew Bacevich wrote in 2012. Bacevich himself fought in Vietnam; his son was killed in Iraq. “Persuaded that they have no skin in the game, they will permit the state to do whatever it wishes to do.”

One comment on “Highlights reel: James Fallows on US military has Australian relevance”