Going to the Flicks, Brisbane, November 1915

26 November 1915 was a Friday and it was the final night of the ‘stirring military program’ at the Strand Theatre at the corner of Queen and Albert Streets, Brisbane, somewhere near where Hungry Jack’s and JB Hi-Fi are today. Top of the bill was Across the Pacific, which seems to have been a combination of Mills & Boon and Boy’s Own Paper. ‘GRIM WAR IN ALL ITS HORROR’, the advertisement says. (We have preserved its eccentric formatting.)

She had refused his love, but when she realised his full worth she followed him across the Pacific, right on to the Battle-fields, and there amid the Shrieking Shrapnel and the Bursting Shell, she found him.

SEE The Attack and the Running

SEE as a Boy sent for Reinforcements!

SEE Holding the Enemy at Bay! The

The Charge! The Enemy Routed!

The Meeting on the Battlefield!

“I have come because I love you.”

The supporting ‘fillum’ featured Kitchener and Joffre in the trenches in ‘An Impressive Reproduction’ authorised by ‘the FRENCH MILITARY AUTHORITIES’. Keeping the mood appropriate there was ‘Special Martial Music by STRAND SYMPHONY ORCHESTRA’. And all this for less than a bob – ice-creams extra. 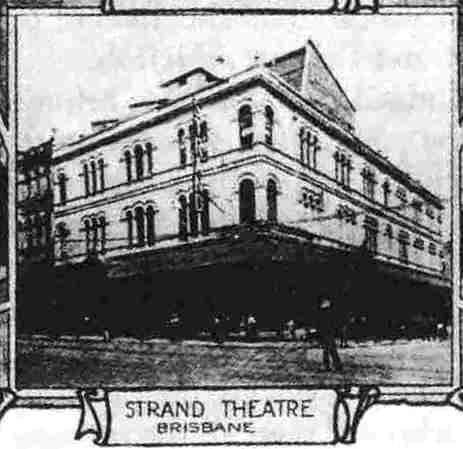 We know nothing more about the 1915 Across the Pacific – anyone who does, please let us know – and whether it was partly intended to boost recruitment. (The tables at the end of Joan Beaumont’s Broken Nation show enlistments were slipping in the final quarter of 1915 but picked up early in 1916.) It should not be confused with another Across the Pacific, made in 1942 with Humphrey Bogart, Mary Astor and Sydney Greenstreet (directed by John Huston), which certainly was a propaganda movie.

The director of the Strand Theatre, Senora Spencer (real name Mary Stuart Spencer) was quite an entrepreneur and was once known as ‘The Only Lady Cinematograph Artist in the World’. She also owned a Strand Theatre in Toowoomba. The war did not stop her constructing the Brisbane Strand Theatre. Lavishly appointed and set up to show ‘continuous pictures’ to up to 1000 patrons, the theatre had opened on 31 July 1915. There was a picture of the interior in the Brisbane Courier on 24 July 1915.

Print This
Click here for all items related to: Australia's war history, Expressing ourselves, Home front